eLearning Guild Research: What Authoring Tool Do You Want to Buy?

What percentage of your job is authoring or developing eLearning? If you’re anything like the 1,055 respondents of our 2013 Authoring Tools research report, you spend from 10% to 50% of your time developing (authoring) eLearning (Figure 1) and you have been developing eLearning for between a year (or less) and six years. 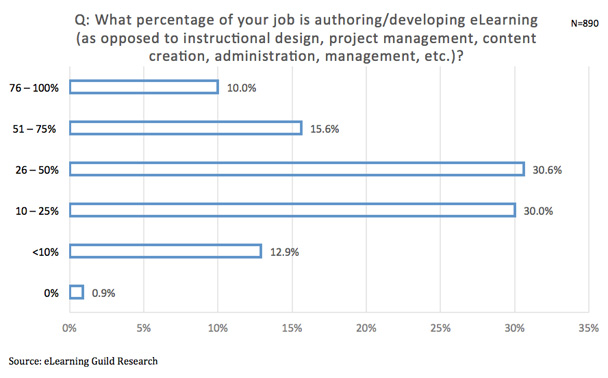 Which tools are most used? Which are most important? Which are under consideration or buying?

The recently released Authoring Tools research report reveals what respondents called their most used and their most important asynchronous eLearning authoring tool (two different questions). Captivate was most used with 64.2% of respondents using it (respondents could select all the tools they used). Captivate was also tagged as most important, at 28.5% (respondents could select one tool in this part of the survey). See the report itself for charts listing which tools came in second, third, and so forth for both questions.

The next question asked respondents to select one asynchronous eLearning authoring tool they’ve considered buying. We wanted to get a sense of future buying or perhaps what they would purchase on their own, as many tools are purchased by companies and may not be the first choice of their developers.

Figure 2 shows that the tool with the highest votes, at 23.3%, is Storyline. Captivate is next at 11% and Camtasia Studio is third at 9.6%. This is a shift away from what they chose as the most used asynchronous eLearning authoring tool and what respondents said was their most important asynchronous eLearning authoring tool. And that’s kind of interesting. 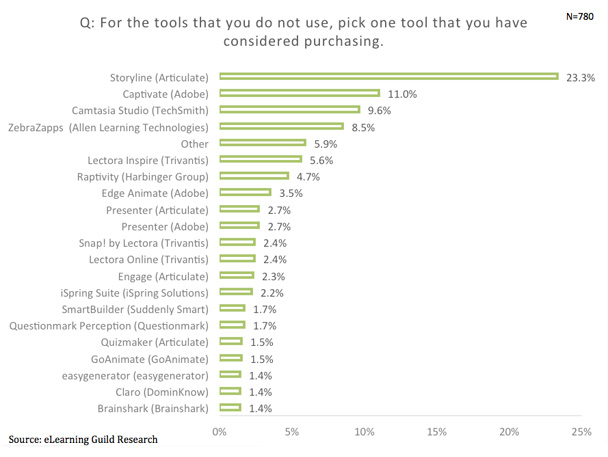 Reasons for the choices

When we asked respondents the reason for selecting specific tools, the top answer was “It has the features I need.” The second half of the report does an exhaustive analysis of the features that respondents want in their asynchronous eLearning authoring tools and I’ll be reporting on the top  features that emerged in that analysis next month.

There’s a great deal of important information in this report for practitioners, managers, and vendors; and with so many developers and authoring trainers responding, this data is really quite valuable. Here’s a heartfelt thank you to all of the people in the Guild network who took the time to provide detailed data for this complex survey.