Leaders in the Limelight: Amit Gautam 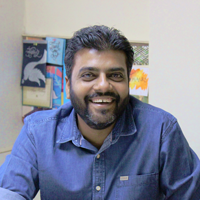 My title: Co-founder and director, UpsideLMS

Best business advice I ever received: This question was a bit of an eye-opener for me. I realized that we haven’t sought or received a lot of business advice, probably because we never went out and asked for it! (Note to self—do that more! We should leverage the experiences of others to do better.)

One thing my business partner and I recognized prior to founding Upside Learning is that customer delight and a healthy cash flow are vital to business success. We have tried to stick to these principles. Of course, there are many factors that go into business funding. A funny quote we heard from an MBA senior, who is now an active business investor, was: “If you need money, ask for advice; if you need advice, ask for money.”

Most daring personal career move: I have only made three career moves so far; two were very daring for slightly different reasons.

I come from a humble middle-class background, the eldest of four siblings. My parents literally invested everything they had to ensure that my generation would have a better life. A lot was on my shoulders. I got placed with Infosys during my MBA, which was then a dream company for many. After spending about 15 months there, I realized I wanted more. I always had this nagging thought to start my own business, but I didn’t have the courage to risk it all. Additionally, just for me to reach that point, my family was under a huge debt—with three more siblings to graduate from college in due time.

Working at Infosys was amazing. I traveled abroad and learned about projects. However, it became too big for me, and I realized I just couldn’t be one of thousands of resources at an IT services company.

This led to my first daring personal career move. I joined a startup founded by two of my MBA seniors in the ed-tech space. It was risky because it was not a big pay jump and I was leaving behind a brand name that many in India can only dream of. With their jaws slightly open, almost everyone I knew asked, “How can you do this? Why?” Interestingly, the only ones who never asked me this were my parents! As always, they said if I knew what I was doing, then go ahead. They never once put their worries in front of my decision.

I spent roughly three and a half years at this company. It was a small team when I joined. I worked directly with the founders and promoters; it was the best experience I could have asked for. I loved everything. But that nagging thought about starting my own business never went away. After three and a half years, it looked like time to move on.

So in 2004, I made my second daring career move. I left that startup and founded Upside Learning with my business partner. It was also the year I got married. (So I actually made two daring moves in that same year!)

Looking back, both career moves made me stronger and moved my career graph forward very positively. I wouldn’t have done anything differently, even with today’s hindsight.

What I’m most proud of: On the professional front, I am most proud of the UpsideLMS team I have had the privilege to create, nurture, and lead. It is a team of rock stars, and just the people I want to take UpsideLMS to the next level. I am proud of the fact that this team displays a lot of openness, ownership, and competitiveness, some of the qualities I have tried to build on.

On the personal front, I am most proud of the fact that I have not let my work demands take time away from the people I love most. At some point in my life I realized the trade-offs involved, and balanced those in order to give a lot of time and love to my family. I still do that consistently. (Of course, having an angel of a daughter just makes it super easy, and her smile every day when I am home makes it all worthwhile!)

Current workplace challenge: Currently, the workplace challenge I am addressing is how to scale up the top line without losing the bottom line. The LMS industry is growing; many reports suggest it will remain a growth industry for the next two to three years, and hopefully more. But the LMS space is already crowded, and it’s a challenge to increase market share on a consistent basis. As a strategy, growing at a steady, aggressive rate is part of our push for the next two years. When scaling up aggressively, it’s common to lose track of the costs that keeps creeping up quietly but speedily. It’s important to maintain profitability, and keep an eye on cost and efficiency at the operations level.

Something people don’t know about me: There are lots, but thankfully I only have to write about one! I would like to believe that at the core I am the same person at home, in the office, and in public. Almost everyone who knows me has told me how mature I am at handling situations. I don’t lose my temper easily, and I can handle even extreme situations with ease and calmness. Probably this is why I can be cool even under extreme duress.

However, what people (other than a handful, thankfully) do not know is that I was a very angry teenager. I still remember (not very proudly though, looking back) how I broke doors, windows, and glass panes with either my bare hands or head while arguing. It sounds kind of kung fu-ey now, but it’s not something people can even imagine me doing. Now, I am all Zen!