Articulate has been hard at work, not only creating an update to Storyline as expected but changing the whole way that it offers its products. Articulate 360 is not just an update: It includes all of the products that Articulate offers—updated versions of those it has offered in the past, along with new ones—all under one banner. Figure 1 shows the nine different products included, four of which you download and install, four of which are web-based, and one of which is an iPad app.

Figure 1: All of the Articulate 360 products

Storyline was introduced in May 2012 and quickly started to gain steam in the marketplace. Version 2 was released in September 2014.

Using Storyline 360 now, you have several more features at your disposal, though the interface and the toolbars have largely remained the same. The biggest differences are:

Notice there is a new interactive object called Dial, as seen in Figure 4. You can convert objects and images into a custom dial or choose from two basic pre-built dials, each of which is very customizable. See the options in Figure 5. Both the Dial and Slider interactive objects give you a great deal of power: They let you build interactions for learners that let them experiment with changing values to see what the results would be. For instance, you can have learners turn dials to adjust number variables and change the state of panels, characters, or any other type of object, and then choose what they believe is the best combination of factors, at which point you can provide feedback on the choices made. Dials are really helpful for building courses in manufacturing environments where you’re trying to recreate industrial machine interfaces. For example, you can imagine a dial that learners adjust to the correct setting to perform a particular operation.

Whatever you create in Storyline now, you automatically get responsive options. Always resident at the right on the toolbar are preview options for desktop, tablet portrait and landscape, and phone portrait and landscape (Figure 6). You can choose individually to limit the phone and tablet views to just portrait or just landscape.

My experiments, albeit limited, with the responsive design views have proven to me that Articulate has done a great job optimizing each view to ensure good results. Note that you don’t have the ability to exclude or add objects in different views. Whatever you have on the screen will be the same in all views. Like the Flash version, it will resize the slide for each view without changing the aspect ratio. The advantage is that you don’t have to tweak the different views, but the disadvantage is that you can’t tweak the different views. I found in testing this, for instance, that a Dial I placed on the stage was too small to adequately use on my phone, so I had to make it bigger, but this doesn’t affect only the phone view: The Dial is bigger in all views. Having the power to customize each view is a matter of some debate in the eLearning industry. Articulate has opted to keep it simple by not allowing changes in the views, which in most cases will serve your needs well, but it may mean making some small design compromises at times. 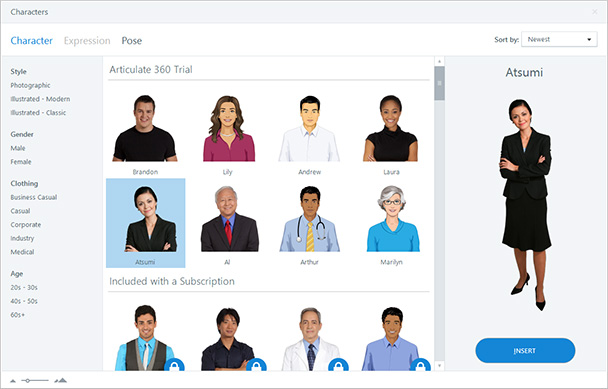 Similarly, Storyline 360 now also includes many new templates (Figure 8), which you can filter by type and light or dark theme. All the interactions included are pre-wired and ready to go, and all their elements are tied in to font and color themes, so you customize them to your style and brand. Templates come in both 4:3 and 16:9 aspect ratios, and Storyline 360 will serve up the closest version to your project canvas. 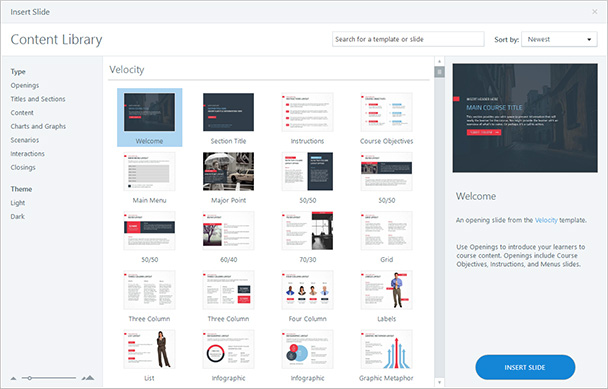 A really nice addition to the motion paths is that you can now indicate that objects should change their orientation as they move along the path so as to appear fluid (Figure 9). For instance, if you have a car move around a circle, rather than have it always appear in the same position as it moves around, it will turn. See the example I posted here. You can also now rename motion paths.

You can now activate triggers on four new conditions:

You can use these new triggers to add gaming elements, but also to apply other types of learning needs.

Earlier versions of Storyline allowed for publishing to HTML5, but always included the Flash version when doing so. Articulate has completely overhauled the Storyline 360 rendering engine using the latest technologies, leading to faster playback, particularly on mobile devices. Now it offers several options (Figure 10), the default being HTML5 with Flash fallback. The four options now include: 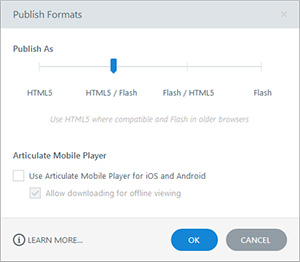 I think it’s great that Storyline now offers these four options, because it adds flexibility and efficiency to publishing. As before, you can also check the option to have the learners use the Articulate Mobile Player. When checked, learners who don’t have the Mobile Player will be prompted to download it free of charge.

Storyline 360 integrates with a new web app included with Articulate 360 called Articulate Review. It lets you gather consolidated feedback from stakeholders and subject matter experts on your course. In the Storyline 360 publishing options, when you choose Articulate 360, Storyline will publish your course online and allow you to immediately see it there. There, you can password-protect your course if you wish, and then share the URL (and the password, if needed). Your reviewers don’t need an Articulate 360 account to provide feedback. When they make comments, Articulate Review captures a screenshot of what they were looking at, reducing misunderstandings (Figure 11). 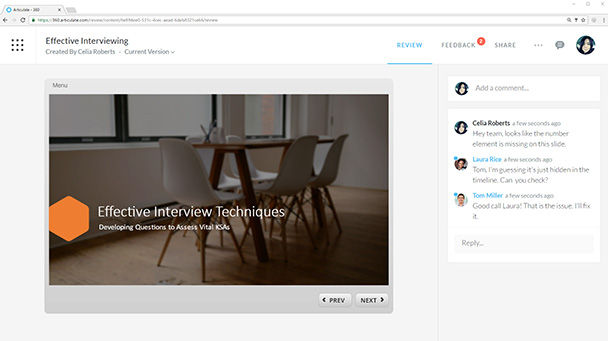 There are a handful of other additions and updates that are worth mentioning:

I should note that perpetual versions of Storyline (Storyline 2) and Studio (Studio ’13) are still available for sale, but they don’t include the latest Articulate 360 updates.

This month at DevLearn, some people told me they were very excited about the new and updated features in Storyline 360. Others told me they expected more in this release. My take is: This update is well worth using for its additional trigger actions, motion path improvements, and the dial option; I just love the extra power these give me. Of course, the responsive design features are fantastic for their simplicity, even if they lack the extra power to customize the different views. Add to that the Content Library, the integration with Articulate Review for easy project reviews, the added flexibility when publishing, and the other updates I’ve discussed above, and I have no hesitation in recommending that Storyline users update now.

What of the pricing changes? If you are already using more than one of the products that are included in Articulate 360, you will end up saving money in the long run, even if it means that you will be paying an annual fee to continue using the products. If you are using only one of the tools, it may still be worth updating, as you now will have several other products at your disposal that you may very well find useful in meeting your instructional design needs.