Online video is becoming increasingly important in the training universe. However, trainers and eLearning pros frequently complain about the cost and complexity of creating engaging videos. Until now, the alternative to webcam talking heads and death-by-PowerPoint footage has been to hire a videographer.

One particular form of video, whiteboard animation or “explainer videos,” can be both effective and engaging. However, until recently, these had to be done by an outside studio. The public release of TruScribe’s Whiteboard Animation Software last month changes that. TruScribe still provides design and production services—as do others—but now, end users can create these videos themselves for a modest subscription fee. 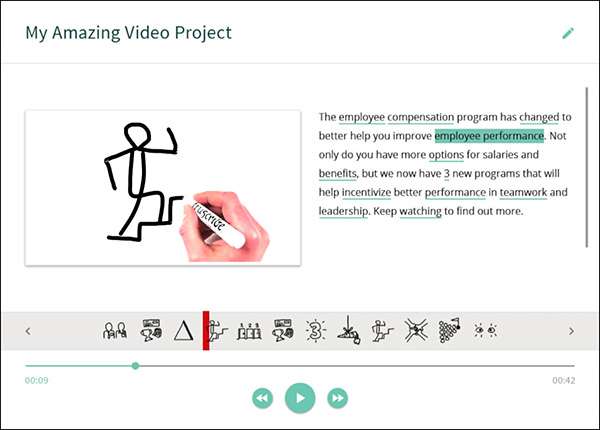 The process itself is a simple one (Figure 1). The user records the audio (or uploads an audio file), using keywords associated with animated “glyphs” from a common library. (End users can create the glyphs themselves. More on that later.) Once the designer chooses the desired glyphs and adjusts them on the timeline, the software creates an MP4 video for embedding in a website or for inclusion in an LMS or video learning portal, such as the Viddler Training Suite. Users can create unlimited videos or video segments, which they can then combine with other video footage (animations and/or live sequences) in a seamless playlist.

The value of motion

TruScribe maintains that motion is an essential part of an engaging storytelling medium. Trainers often echo this notion—after all, trainers are telling stories to help advance their audience’s skills. Each glyph in the library (there are over 10,000 to choose from) is a playback sequence, repeating the artist’s drawing motion. In addition to using the library, subscribers can create their own glyphs using an iOS or Android app and the touchscreen of their mobile device. There is a finite amount of available “ink” for each glyph, which keeps each one reasonably simple. The app also includes smoothing tools and other techniques for creating a pleasant overall effect.

Trainers can create these glyphs themselves or assign them to someone with better drawing skills. Licensing is currently open source, but as the system becomes more popular, it is inevitable that a designers’ marketplace will arise.

The drawing (and resulting animation) is not the most intriguing aspect of the system, however. Each glyph has multiple associated keywords, and the user community can vote on the most popular glyph-keyword associations. With increased use, this form of idea crowdsourcing is likely to create a new “visual-motion vocabulary”—not only for trainers and eLearning professionals, but for anyone using video to tell a story or sell a product.

Worth a thousand words

TruScribe’s approach does not guarantee content efficacy, of course. Almost certainly, there will be bad examples of whiteboard animation—just as there are badly created textbooks and PowerPoints today. However, putting this software in the hands of skilled trainers will democratize the medium, lower costs, and create a powerful new online storytelling tool.