Jay Cross, called by many “the Johnny Appleseed of informal learning,” passed away on November 6, 2015. 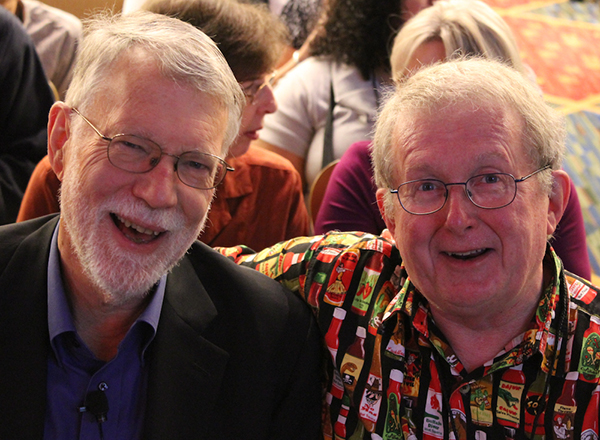 Jay Cross (on the right) at DevLearn 2010, with John Seely Brown

Jay has been credited as the person who came up with the term “eLearning,” or at least as the first person to use the word on the Web. A graduate of Princeton (social science) and Harvard (MBA), for many years his work involved marketing to banks. He designed the first business degree program offered by the University of Phoenix.

In 1998, Jay founded the Internet Time Alliance. In addition to being the CEO, he called himself the Chief Unlearning Officer. Jay is the author of Real Learning (2015), Informal Learning: Rediscovering the Natural Pathways that Inspire Innovation and Performance (Pfeiffer, 2006), Working Smarter Fieldbook (2011), and Implementing eLearning (ASTD, 2006). Beyond his books, Jay wrote hundreds of blog posts and articles, and delivered many keynotes, talks, and sessions at professional conferences for educators, trainers, managers, and others around the world, concerned with improving human performance in organizations.

In mid-2015, Jay launched the Real Learning Project; at the time of his death he was developing a community around that project.

An advocate of experiential learning and systems thinking, Jay said that his calling was to create happier, more productive workplaces. In the service of that mission, he was a tireless networker and champion of “bottom-up” learning. Jay has been a driving force for the emergence of informal learning as a valid area of interest in our field. Today, many who do not know his name have nonetheless been influenced by his thought and his work.

Herewith are reflections on Jay, his work, and what he has meant to our field from some of the people who knew him best.

David Holcombe (CEO and co-founder, The eLearning Guild): It was my good fortune to know Jay Cross for more than 20 years. During that time he was consistently one of the leading thinkers in the learning technology industry. He was always “thinking outside the box” and thus he was often in a position where he was challenging conventional assumptions about how we should be doing things. It was his perpetually curious nature that enabled him to look at every facet of what we do. And then to re-look at them. To explore. To ask, “What if?”

I remember an event about 10 years ago in Orlando where he showed up wearing big fluffy Eeyore ears. When I asked him why he was wearing them he responded, “I’m trying to push people out of their comfort zones. I’m tired of all the Eeyores who don’t want to do things differently.” That was Jay. Always pushing himself, and others, out of their comfort zone. I’m not sure who in our industry will do this now. We need it. I hope others will rise to the challenge. Jay will be missed.

Clark Quinn (executive director, Quinnovation): I had the great fortune to get to know Jay over the past 12 or so years. He possessed a truly impressive intellect, an infectious humor, a generous spirit, and a zest for life. He could be a force of nature, in a positive way, and had a big impact on the field of eLearning, not least via his industry-changing book, Informal Learning. He mentored many (including myself), inspired more, and served as gadfly to others. Jay was a wide traveler, voracious reader, engaging raconteur, bon vivant, and friend. He will be sorely missed.

Allison Rossett (professor emerita of educational technology at San Diego State University: A few years ago, Jay and I participated in a debate at the Oxford Union. It was thrilling to occupy the same debate stage once occupied by Malcolm X, Winston Churchill, Dalai Lama, Hamid Karzai, Dennis Prager, Judi Dench, Burt Bacharach, and Andrew Sullivan. It was obvious to me from the first moment I saw the framing that my team would lose certainly and resoundingly. The question was something like, THIS HOUSE BELIEVES THAT TECHNOLOGY-BASED INFORMAL LEARNING IS MORE STYLE THAN SUBSTANCE. Jay, and two others, spoke in opposition. They favored informal learning. I, Nancy Lewis from ITT and IBM, and Deutsch Bank’s Mark Doughty were given the hopeless task of speaking against technology-based informal learning. We fought nobly, but there was no way to argue for this extreme measure. Jay and his team brought us to our knees and then graciously honored us in the tradition of the Oxford Union.

Because we were there for several days, I got to be with Jay in ways I hadn’t before. Whip smart, he was curious and piquant. He liked food and we soon found ourselves some delicious morsels in the nooks and crannies of Oxford.

Too soon. We are always saying it’s too soon. But it’s so true for Jay. He was still writing, provoking, traveling, and tippling. It is hard to imagine an online world without him, hard to imagine conferences where we don’t grab a bite somewhere, somehow.

Marc Rosenberg (management consultant in the learning space and author): Jay Cross saw trends in our field long before anyone else did. He had the drive and the conviction to say what needed to be said, and, refreshingly, not always in the most politically correct way. He was fearless, a thorn in the side of mediocrity, a champion of change, and a true pioneer. I knew Jay for many years and I remember him for his sharp mind, his brilliant writing, his happy warrior smile, and, of course, his Hawaiian shirts. We are diminished by his loss, but his insights, reflected in his work, will carry on.

Harold Jarche (principal, Jarche Consulting): I first got to know Jay Cross through his blog (it was before we even used the term) in the late 1990s. I was one of the few people to comment on his posts and that was the beginning of our friendship. Our first venture together was the “Informal Learning Unworkshop” series, where we used a different web conference platform each time, sometimes changing in mid-course when the technology broke. I learned to fly by the seat of my pants with Jay. Working with Jay Cross was always an adventure. Jay was a deep thinker and a man of many talents, never resting on his past accomplishments. I learned a lot from Jay. Most of all, he taught me to seize the day, and I will.

Jane Hart (speaker, writer, and independent workplace learning and collaboration adviser): I’ve known Jay since around 2000. What he was saying back then about workplace learning might have been revolutionary or oddball to others, but made absolute sense to me. He became my guru. I owned the E-Learning Centre back then, and I put his blog at the top of my list of Top 10 E-Learning sites. He picked up on this and realizing I appreciated and understood his thinking and work, connected with me and we never looked back. But not only did he became a great colleague (as he brought in other like-minded folk, Clark and Harold and Charles [Jennings] to form the Internet Time Alliance) but also a good friend—to both me and my husband, Philip. They got on so well because they both had such a zest for life, art, and good food. In fact, a few years ago Jay flew from California to the south of France specifically to taste the bug menu that Philip had discovered! Jay was always in our thoughts, and whenever we found a unique place, we’d say “Jay would like this!”

Charles Jennings (senior director, enterprise strategy, Internet Time Alliance): It seems as if I have known Jay for a lifetime. In fact, I think we met just 15 years or so ago. I had heard him share his insights and wisdom at a conference in London. When everyone else was obsessing about the “new wave” of eLearning—converting boring classroom courses into boring electronic versions of the same—Jay was out on his own and encouraging people to break out of the shackles of formal learning and exploit the opportunities of informal—riding our own bicycles rather than riding the bus, as he described it. I was immediately impressed and invited him to come and speak to my colleague at Reuters.

Jay was smart, incisive, and a wonderfully creative thinker. Never happier than putting the world to rights over a good meal and a drink or five, or mapping out his many ideas in one of the ubiquitous notebooks he stocked up on from KaDeWe in Berlin every year.

Like many, I will miss him terribly. He made his mark and has left the world a better place.

At Learning Solutions Magazine and The eLearning Guild, we extend our condolences to Jay’s family and to his many friends and colleagues around the world. Jay will be long remembered and honored for his spirit, his insights, and his contributions. If you knew Jay, please add your memories of him to the Comments.