People know me as a tools expert, and most know that I find myself using some tools over and over. Whether that’s because success breeds success and my reputation as an expert in any one tool translates into more offers of work by companies that also use that tool, or simply because certain tools are used a lot more than others in the eLearning world. I’m not sure—it’s probably a bit of both. While I do use several tools on projects each year, there’s no question that I get more requests to work on projects that require Adobe Captivate. Your experience may differ based on your own reputation as an expert in a different tool. This is a question I would love to see addressed some time.

Regardless, it’s true that I’ve been using Captivate for thirteen years now, starting when it was still called RoboDemo. Last week, Adobe released Captivate version 9. With each new version, there have been some very welcome additions, some new features that would first make us scratch our heads only to find eventually that we couldn’t live without them, and some features that perhaps addressed certain audience needs and not others (I’m looking at you, Equation Editor).

Here are my top nine reasons to update to Captivate 9:

This is a brand new app for iPads that lets you storyboard ideas, dropping in images, text, audio, and placeholders for web links and videos, and much more. You download Adobe Captivate Draft from the Apple app store. It’s free, it’s a really fun app, and it’s easy to use. The best part is that you can upload the storyboard you create to your Adobe account whenever you’re connected to the Internet and then you can bring it into Captivate as a project using the new option you see in Figure 1 below. It gets converted to Captivate slides quickly and you can then build from there. It’s very cool, and lets me get a real head start on projects.

While I’ve only played with Captivate Draft thus far and haven’t used it on any real client projects, I’m intrigued by the possibilities. This tool may become a standard part of client projects for me. Time will tell, but I’ve got a good feeling about this.

Responsive learning refers to eLearning you create that works equally well on desktops (or laptops), tablets, and smart phones. While Captivate 8 was one of the first eLearning development tools to allow for responsive learning, today there are a handful that offer this feature. However, I’ve yet to see any other tool offer as much customization in all three views as Captivate has. It does require more work to make everything look perfect, but the other tools force you more into a templated approach (at least, those I’ve seen thus far). I prefer that my eLearning designs not be limited by page types and such, but that I develop my own, specific to the learning and the audience. Captivate lets me do that.

In version 8, there were three breakpoints offered, the aforementioned Desktop, Tablet, and Mobile (aka smart phones). Version 9 offers two more to address some highly requested needs (Figure 2): Tablet Portrait and Mobile Landscape (shown as Custom Mobile in the Figure). In version 8, tablets were assumed to be landscape and smart phones were assumed to be portrait, so if you turned either one 90 degrees, you would see your learning at less than full screen. Version 9 changes that so now you can take full advantage of every possibility. You can delete any breakpoints you don’t want in Captivate 9.

Figure 2: There are now five breakpoints rather than three, covering each orientation

Some folks I’ve met have created ten or more projects in the last year using responsive design. Others have done none. I’m in the middle: some of my clients wanted mobile—hence responsive design—and others have not. I really like these added new features because they give me more power (more control over what the learner will see at each breakpoint) while at the same time making life easier (alignment options, fewer limits on effects). Captivate will continue to be the most powerful eLearning development tool for responsive, but it does mean that more planning in the design stage should take place. I’d rather have the ability to have the tool accommodate my instructional design than have my instructional design fit into what a tool will allow—and Captivate 9 does this.

As a long-time programmer and coder, I welcome three new features in Captivate’s actions.

If you know me well, you know that I love creating powerful actions that let me give my clients what they want. For instance, this year, a client wanted me to create a very specialized multiple-choice question with multiple responses, multiple types of feedbacks, the coloring of answers, etc. Captivate’s quiz questions didn’t have some of those features so I had to create my own (or disappoint my client). Using Advanced Actions and variables, I managed to create exactly what was requested. When all was said and done, I changed my Advanced Actions to Shared Actions and was able to repeat using them over and over more easily and quickly. This is what I mean when I say I like a tool with power. The new features are certainly welcome (I’ve long since requested both) but I’m really hoping that Adobe will see fit to make the Advanced Action editor much more script-friendly for those of us who work much faster in that mode. Creating Advanced Actions has always felt just a tad slow for my taste, but I think others may prefer the current method, so I suggest Adobe allow for both options.

Yes, Captivate finally allows objects to have multiple states! This makes it a lot quicker and easier when you want to present a learner with an object that is changing either on a timed basis or when the learner performs an action. For instance, you can have an on-screen character who changes facial expression depending on actions the learner takes. See Figure 9.

You can create as many states as you like. For instance, I created the ones you see in Figure 9 above. Subsequently, I can use the actions I mentioned earlier, the most useful of which is Change State of. See Figure 10, where you see that the states I created are listed by name, so if I want the character to look frustrated by a choice the learner made, I just switch the state to Frustrated on that choice. 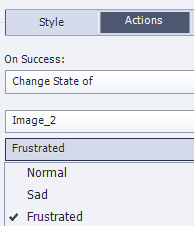 Multi-state objects allow for a lot more flexibility and at the same time they make showing and hiding elements much easier. I think I’m going to use the heck out of this feature.

These are welcome new features, especially the Knowledge Check slides. In the future, I’d love to see more flexibility in how questions are formatted and have more options available.

Scaled-Vector Graphics (also known as Scalable Vector Graphics or SVG) are those images that are not stored pixel by pixel, but as mathematical formulae. Yes, you build them in a tool like Adobe Illustrator, and you don’t need to know any math, but the files created are such that the images will look crystal clear at any resolution. That choice has now been added to the Media menu. See Figure 13.

What’s there not to like about this option? We can finally have images that are truly scalable. Now to start learning Adobe Illustrator!

The SCORM Cloud (http://cloud.scorm.com) has become an indispensable tool for testing my lessons to ensure they are SCORM-compliant before testing them in the client’s LMS.  It’s great because you can upload up to 10 zipped SCORM-ready lessons of up to 100 MB each free of charge. You can delete lessons you’ve uploaded previously, so as long as you don’t have more than 10 at a time, it doesn’t cost you anything.

The normal process I go through is to:

Now I just choose the option you see in Figure 14 under Preview. Captivate uploads and launches the file automatically. As I walk through the lesson, the SCORM Cloud is generating a log that I can download to let me see exactly what’s going on behind the scenes. Regardless of whether I want that level of detail, when done, I can choose to relaunch the course again or review the course results in a report that’s easy to read. Closing the preview automatically deletes the lesson off the SCORM Cloud. 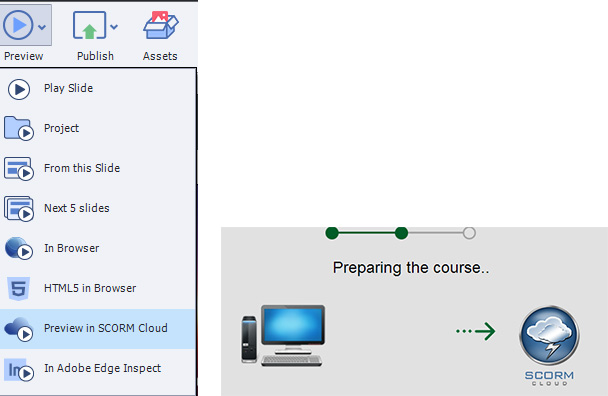 Simply put, I love this new option. It will save me a lot of time.

H. Motion paths and other effects

I’ve used motion paths for a variety of learning applications since they were first introduced in version 5. For instance, they’ve been useful in having a learner direct a fire investigator to different parts of a hospital floorplan and then have the character move down the hallways, correctly turning right or left where necessary. I’ve mentioned above that now motion paths can be used in responsive design projects, and that’s great, but the whole approach to adding effects has been greatly improved in Captivate 9.

There’s no question this gives me lots of new options and makes it easier for me to apply effects. I like this very much.

By now, almost everyone has heard of the eLearning Brothers. They provide libraries of thousands of templates, games, character photos, and more that you can use in a variety of ways and in a variety of tools. Now Adobe has teamed up with the eLearning Brothers to give us free access to over 25,000 assets. Again, free access. It’s a wonderful thing. Clicking the new Assets toolbar button

opens a window with all of those lovely assets ready for you to download. See Figure 18.  Once you download characters for instance, you’ll find them in the normal Characters dialog. 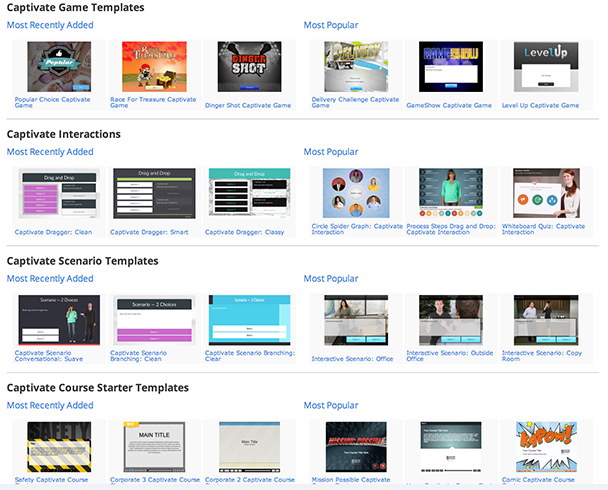 I can’t think of any reason to hate this idea. The only concern I may have is if everyone starts using the same assets, everyone’s eLearning will start to look the same, but with all these assets available, I don’t think I’m too worried.

Every authoring tool is jockeying for market position. Adobe Captivate continues to have the biggest market share (the low subscription price has certainly not hurt) but Adobe has not rested on its laurels. Yes, each tool vendor looks at what its competitors are doing and tries to leapfrog the feature sets of the tools of those competitors, and Adobe is no exception. You can’t ignore your competition.

More importantly, though, is listening to what your customers want, and Adobe does focus on that quite a bit, sending out its people to talk to customers on a regular basis.

No matter what Adobe adds to a new version, there will always be some of us who want more or who might have chosen a different feature to add than one that was. The important question to ask is, “Are the added features worth the upgrade?” In this case, the answer is definitely Yes. Is there room for improvement? You bet there is! Is that true of any software? Of course! I’m happy to start using Captivate 9 with its new features and possibilities for better instructional design and I look forward to seeing what Adobe does next.