As many of you know, I’m a huge advocate of making eLearning challenging and engaging. I can hear you now, “Yeah, Joe, but who isn’t?” Well, we may all want to create great learning but the truth is that most learning is linear, passive, and boring. For the last several of the 32 years that I’ve been creating eLearning, my main career mission has been to show and teach how to design and develop eLearning that is scenario-based, that makes the learner think, that allows experts not to waste their time slogging through a lot of material they already know, but that also allows novices to get plenty of extra help. There are more elements, of course (media, social learning, and others) that help a lot, but we start with scenarios and build upon them.

Scenario-based learning, simply put, allows the learner to make mistakes and learn from those mistakes, not typically with immediate feedback (though that may be preferable sometimes), but with delayed feedback. What if the learner makes a mistake in performing the series of steps in a surgical procedure. In real life, that may not be evident until several minutes, hours, or even days later. Scenario-based learning gives us the ability to have potential surgeons and everyone else learn from their mistakes in a safe environment, one in which real patients don’t actually die as a result (and that’s a good thing).

In the past, whenever I’ve created such a lesson, I’ve used flowcharting applications to lay out the scenes and their branches, which made it much easier to then develop the slides or pages and the navigation between them in Adobe Captivate, Articulate Storyline, or Trivantis Lectora. See Figure 1 for a complete scenario I built for first-responder flood training and Figure 2 for a close-up of a section of it. Notice how after I created the flowchart I assigned numbers to each scene, which translated into slides in Captivate and Storyline and into pages in Lectora. 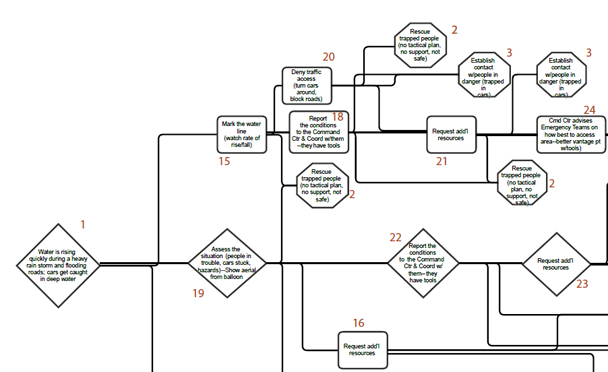 Figure 2: A section of the flowchart

While this approach has certainly worked for me in the past, I’m very happy to have found BranchTrack, a cloud-based tool that makes not just the flowcharting easy but actually outputs a full-fledged simulation for you. You can even take the result and insert it into a slide of your favorite authoring tool. In other words, it’s built to play well with other tools.

BranchTrack is simple. Start by setting up your first scene. See Figure 3. 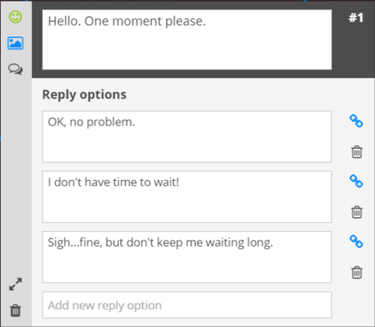 Add a built-in character or an image of your own to display as part of the scene. Set the character’s emotion as well. Finally, you can add a background image too, again from built-in background images or one that you upload (Figure 4). 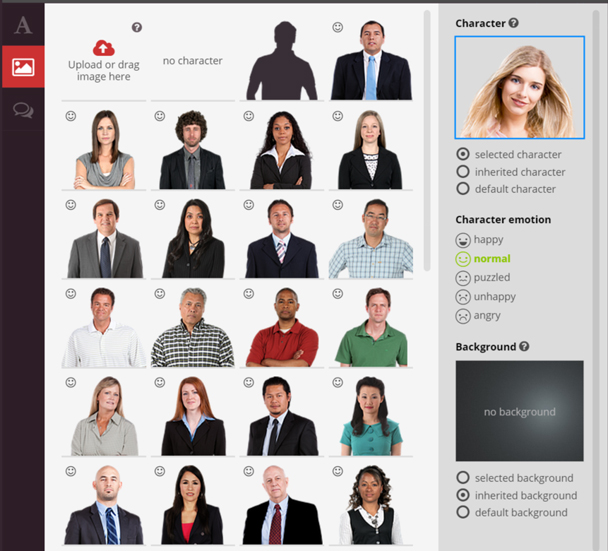 Once you’re set up your responses, you can link them to other scenes, by clicking and dragging the link symbols you see in Figure 4 to any other existing scene or to a blank part of the canvas to create a new scene. As you being to work, you’ll see your scenes and links forming, as Figure 5 shows. 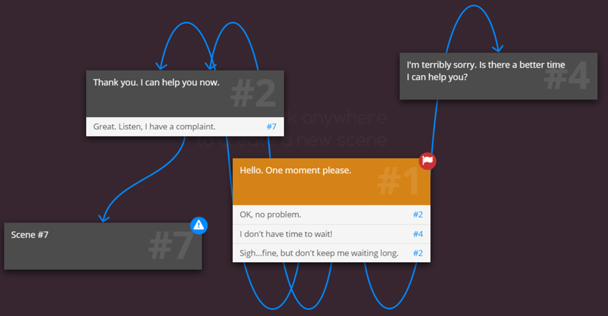 Figure 5: The start of a scenario with scenes and links

Notice that Scene #7 has a symbol. Roll over it and it will prompt you as to what’s missing. See Figure 6.

Back in Figure 3, note the

symbol. This lets you enter the Full Screen editor, where you can add the score for the scene, change the text color, set or change links, and more. See Figure 7. Notice the Feedback option. It can be a bit confusing at first glance because it is not shown as a result of the learner choosing one of the options in the current scene. In fact, it is shown prior to the learner making a choice. It actually serves as feedback to the choice the learner made in the last scene, which then linked to the current scene. In other words, I normally wouldn’t have feedback on Scene 1 but may for subsequent scenes. 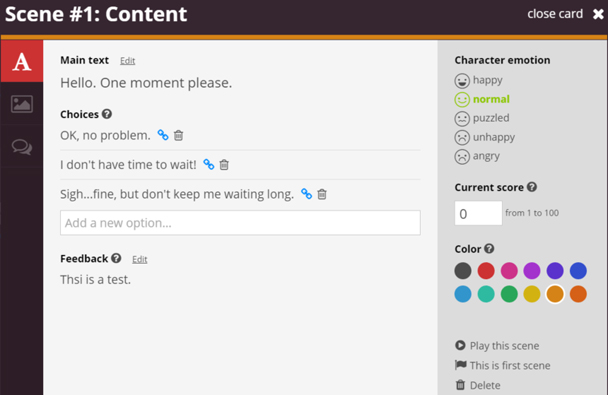 In the editor (full screen or regular), you’ll also see the

symbol. This lets you add comments to the current scene for yourself or for other developers who may be working in the lesson. More importantly, the comments can be set by reviewers. A convenient option in BranchTrack is the Review & Comment window, which lets you invite any number of reviewers you wish and will show you their comments. See Figure 8, which shows a symbol for Scene 1, indicating there is a discussion for that scene. Figure 9 shows the comment, along with additional options. 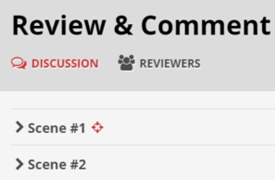 Figure 9: Comments for a scene

You can add audio voiceover to any scene and to its individual responses (video options are coming later this year). One really nice feature is the ability to automatically generate a script in BranchTrack, with relevant information, including what to name each file. By following the filename suggestions in the script, all of the audio files can be brought into the BranchTrack scenes in one fell swoop. See Figure 10.

Remember how I wrote above that you can set the emotion in a scene. This can be displayed to the learner if you wish, using an emotion meter, as seen in Figure 11. This may help learners gauge how well or how poorly they are doing.

There are several other options in BranchTrack worth mentioning:

When you are ready to Deliver your project, you have several options. See Figure 12. 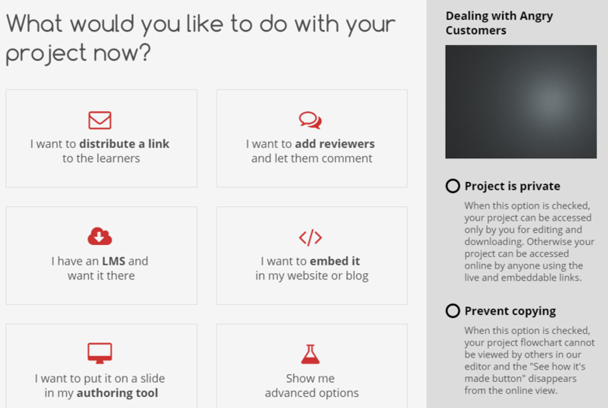 Note that BranchTrack works within your environment, delivering to HTML5. The HTML5 output is built for responsive design, meaning it will automatically adjust itself to different resolutions on mobile devices and desktops, not just by shrinking the image but by arranging it in the best way possible. If your learners are using older browsers like Internet Explorer 8, a tiny bit of Flash is included to enable media playback.

What do I think?

I really do like this product. It’s simple and not overly complicated, but packs some nice features under the hood. For more powerful simulations, ones that use a lot of conditional options and variables, BranchTrack probably won’t be enough, but for most of the simulations that I build, it is a quick and nice product to use. Yes, it’s important that they add video and analytics and that scoring is made more flexible. As I use it more and more, I may find other limitations I’d like to see overcome, but I’m finding this tool is helping me create my scenarios more quickly than I could before and the fact that it communicates with the authoring tools I normally use makes it easy to incorporate the scenarios I deliver from BranchTrack. I think it was very smart for the company to have built in that functionality to let it play well with other tools. I wish more tool vendors would follow that route!

There are currently different pricing models available, starting at Free and going up to Enterprise. I’ve been told that there will be an update soon that will add more features to the Free version, so stay tuned for that. See more at www.branchtrack.com.