Nuts and Bolts: Blame the Learner

A year or so ago  I wrote about metaphors of learning and teaching and how they can shape our practice. The designer or facilitator who sees learners (or choose your word: some prefer “audience” or simply “workers”) as empty vessels, or as blank slates without valid and valuable experience of their own, or as a partner on a learning journey, will likely—often unwittingly—let that play out in their practice. In my career I’ve seen another branch on this tree: our beliefs about learners themselves, and the ways those beliefs can influence the ways in which we enact our work.

Those who recall the early days of eLearning will remember all the resistance. It typically began with the usual first-order barriers like “but we can’t afford it,” then on to “but all our people don’t have computers,” and then, when that was resolved, became “but our people aren’t tech-savvy.” (Translation: “They aren’t smart enough to do it.”) When you’re convinced that learners aren’t very bright, you end up with design decisions like extensive setup info, oversimplified cases and scenarios, and time-consuming can’t-lose multiple-choice tests involving rote memorization and throwaway answers. And of course buttons that not only say “Next” but also spin and flash, along with lengthy explanations of the most basic linear course navigation.

They have bad intentions

I was asked to work up a concept for an online employment law course. The SME sent her slide deck from the classroom version. It was 60 slides long; this (Figure 1) was the only image: 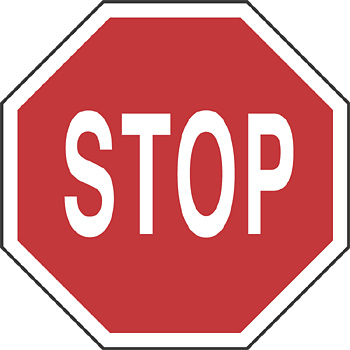 Seriously? What message does that send? “We know you won’t follow employment law guidelines. We know, left to your own devices, that you’ll do this wrong. We are so sure that you’re going to do the wrong thing that we have to put a screaming stop sign in your face. Message: We don’t trust you. And by the way: we own you.” How receptive is a learner going to be? In this case, the message is made clearer by the fact that the stop sign is the only image. I can’t even write it off as misbegotten decorative clip art.

Of course, we see the idea of adults as untrustworthy all over companies, and it’s been prominently in my own view the past few years as I study the way many organizations resist new social tools. (Pop quiz: Off the top of your head, can you provide the name of one employee who ruined the reputation of their company by saying something via social media? Probably not. And no, not Edward Snowden—he didn’t use social media.)

Ways this belief plays out in eLearning and other learning-experience design? Often it drives lists of rules and exhortations, lots of bullet points that begin with the word “Don’t,” and extensive warnings about the dangers of doing something wrong, rather than support and encouragement for doing it right.

Not long ago a designer acquaintance asked for help punching up some dry content. It was admittedly just dreadful source material, with much required compliance content largely unrelated to worker’s day-to-day life. In reviewing the prototype the designer said, “I put in quiz questions every few slides to keep the cheaters from skipping to the end.” “Cheaters.” That pretty much sums it up, doesn’t it? (And this, by the way, from someone who has been known to create content by copying and pasting it, unattributed, from myriad sources on Google.) Given her druthers, I suspect she’d like to prop learners eyes open, Clockwork Orange—style, and force them to look at the course.

It took a long time, but we finally shifted the conversation to ideas for an initial test-out option and ways of making the content more relevant and palatable. It’s interesting that the designer framed this as “They cheat!” rather than as, “They are skipping to the end because this is so excruciating and irrelevant.”

I saw this again in another policy-based program. The screen prior to the quiz showed a shady looking character under giant all-bold “NO CHEATING!” text. I like to believe that intentions weren’t bad. I like to believe that this was the work of an inexperienced designer caught in the decorative clip-art trap. But it sent a message nonetheless. Know what? Mostly, life is an open-book test. And when it comes to things like unemployment benefits law, teaching people to find something—like answers buried in a 25-page policy—is often far more valuable than getting them to memorize it long enough to pass your test. In researching this piece I was kind of horrified at the number of articles I found with titles like “How to catch students cheating.” Maybe time would be better spent thinking about what we do that nearly forces them to cheat, and whether the things they cheat on have anything to do with learning anything. And maybe the bigger question: Are we cheating them by doing things like including meaningless quiz items only as a way of keeping them from “cheating,” or by refusing them the chance to test out?

Next time you’re surfing around looking at eLearning courses, ask yourself what the designer’s attitude toward his or her audience might be. In what ways does it show? Does it help or harm? What programs do you like and find most engaging? I bet they don’t make you feel like a stupid untrustworthy cheater. What would you do differently if it were up to you? If it’s heavily influenced by stakeholders, how can you nudge conversations toward better design decisions?