Adobe After Effects: Not as Scary as You Think

You’ve heard that Adobe After Effects (AE) is really cool, powerful software you could use to enhance the eLearning video you’re working on. You open it up for the first time. You take one look at the screen and what looks like a zillion panels that start swimming in front of your eyes. You scream and close the program. You don’t open it again for a few years … or ever.

You’re not alone! Sure, there’s a timeline at the bottom of the screen just like Premiere Pro, but then there are all those different panes inside the main window. If you’ve used Premiere Pro or Premiere Elements to edit your video, it looks both familiar and alien at the same time. Don’t worry. This tutorial will have you understanding in no time how After Effects works. You’ll be well on your way to getting a handle on the ins and outs of this incredibly powerful software that can quickly add all sorts of visual elements to your eLearning that you might have thought were out of reach. Let’s begin.

Why you should use After Effects

The bar is rapidly moving up for eLearning video creation. Most of us who create media for training need to expand our toolbox to embrace the challenge. We need to create the very best work we can do … every time. After Effects is a program unlike any other image manipulation software on the market. Many others have tried to make something similar, including Apple. No company has been successful. There’s a reason why many Hollywood films use After Effects as a part of the post-production workflow. It works. And it’s an extremely powerful software tool. (See the sidebar “Top 10 Things You Can Easily Do with After Effects to Give Your eLearning Video Punch.”)

This is what you see when you open AE (Figure 1). What looks like a hodgepodge of panes is really a well-thought-out series of workflow steps you’ll use all the time when you’re working inside the program. 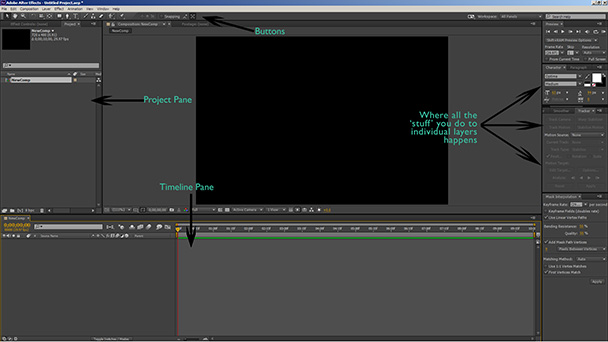 Figure 1: The After Effects workspace and all those panes

If you’re familiar with Photoshop, you’ll notice that while there are a lot of differences, there are also a lot of similarities, many of them buried. They’re not deep, but you need to find them. AE is in many ways like Photoshop on steroids, so once you understand a few paradigms, you’ll be able to easily work in the program and start thinking about what you’re going to do, which in turn will make you even more creative with the program. Let’s get started to make you fearless in After Effects.

This might be the hardest thing to understand about the whole of AE:

Clear as mud? Let’s make a composition in After Effects and you’ll see what I mean.

How to make a composition in After Effects

The easiest way to make a composition in AE is to get the media you need to work with and import it to the Project pane. You do this by:

One of the real powers of After Effects, besides being a powerful program itself, is dynamic linking. Dynamic linking allows you to “link” an AE composition to a Premiere Pro project and insert it into your video sequence just like regular footage.

I haven’t even touched on this, but hiding inside After Effects is a hugely capable 3-D program. It’s called Maxon Cinema 4D. When you install AE, it’s included inside the program. This is a completely different piece of software with a totally different engine. You can only access it from within AE, and after you work on the 3-D part of your project the 3-D project dynamically links inside your AE project. The software is very different. The workflow is very different and it’s very complex, but not scary. I’m not going to cover it here because it’s totally different software to learn, but it’s good to know it’s there.

Sidebar: Top 10 Things You Can Easily Do with After Effects to Give Your eLearning Video Punch

This example will show you how to stabilize a shaky camera shot. If you’ve made video for a while, you’ll know the shot you want isn’t always steady since a lot of us can only do shoot-and-scoot … get the shot and go to the next. In this tutorial, you will create a dynamic link that interacts with Premiere Pro and After Effects and you will gain an understanding of how AE works on a more subtle level. You’ll also learn how to nest an After Effects composition inside another AE composition.

Stabilizing a shot is not as hard as it looks, but there are a few quirks. It’s somewhat more an art than a science and, as usual, there’s way more than one way to do this. This example calls for some creativity on your part. As you do the exercise, be aware that it can be an iterative process, but we’ll also show that. Let’s begin.

Now the fun begins: Look closely at your shot. Focus attention on one little part that has high contrast (the difference between the lightest and darkest pixels or a larger part of what you want to search, perhaps someone’s ear) and look at how that little spot moves around in the screen. Put the timeline cursor back to zero and zoom in on the tiny spot using the scroll wheel on your mouse or trackball.

That’s it. You can now make a composition in After Effects, stabilize your shot, and make it work with your eLearning video! You are a pro!!!