A global software enterprise initiated a cross-company project to re-write its core values. Management envisioned this as a joint effort with the employees, with the goal of producing an updated set of core values that reflected the company’s current and future culture, and expressed the company’s aspirations and strengths.

The first phase of the implementation campaign took place at the beginning of 2013. The primary challenge for the organization development (OD) unit leading the campaign was to create awareness and preliminary recognition of the new values. They were to do this in a relatively short period, and involve more than 50 sites worldwide in a fun and absorbable way to produce a positive first impression and acceptance of the change.

To meet the preliminary implementation challenge, the OD group chose a social online gaming platform (Wheeldo). The platform offers a variety of game templates that you can adjust and customize to specific needs and design requirements.

In this case, the designers selected the game template "Pass the Parcel," and customized its name to "Value Box." The game has two main layers: the base game layer and an additional social layer.

Players pass a virtual surprise box by mail among company employees. Each employee receiving a box peels off a layer of its wrapping and passes it on to another peer. All game interactions award points. Interaction includes sending and receiving a box (Figure 1), as well as recognizing peers by adding a personal message to the virtual box. Players win gift cards hidden in random boxes; the company awarded iPads to players who achieved high scores. 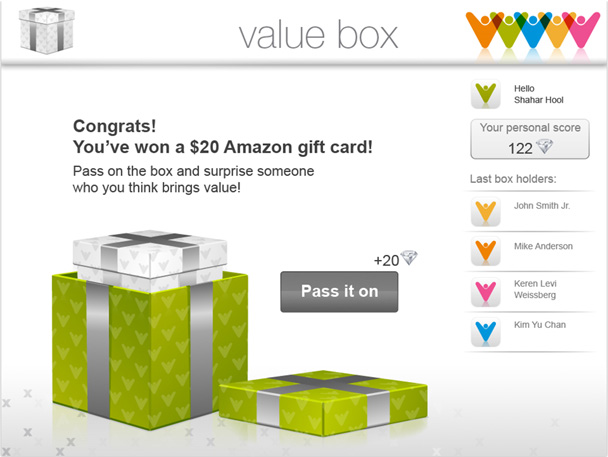 Figure 1: The Value Box game is a customized version of Pass the Parcel; it awards prizes to players.

When sending a surprise box, the player recognizes a peer by selecting a value best describing his/her contributions to the company. (Figure 2) When a player sends a free text message to give a personal touch to the recognition message, the sender is awarded extra points. 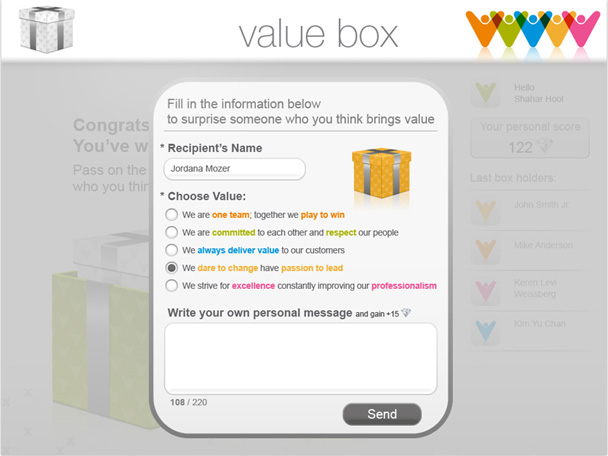 Throughout the game, a "social wall" was visible to all participants. The wall showed current scores and recent activities throughout the company.

Why apply a social gaming solution?

A learning solution should match the need, the company, and its learning infrastructure. In this case, the social online gaming platform was a perfect match for the following reasons:

Learning by playing a game is an ancient method that has taken a modern form. Especially in self-guided or social-learning activities, the learner's motivation is crucial to program success. Games are fun and immersive by nature. In a world where knowledge comes in micro-nuggets and learners’ attention comes in short bursts, games deliver continuous high attention and engagement, thus creating a suitable platform for substantial learning.

This project successfully achieved the learning goals and the business goals. Worldwide, employees passed around 20,000 surprise boxes. Game reports indicated that more than 60% of employees sent and received at least two boxes during the game period. The reports also indicate the deep understanding most employees achieved by writing recognition notes to their peers, using the values.

Both training and HR management report high satisfaction levels from the project and the next venture is already in the planning stages. An employee satisfaction survey a month after the game indicated a high level of awareness of the new values.

Using the online social game proved a powerful tool for implementing change due to three achievements:

Following are several conclusions reached in this project that management will implement in similar ventures in the future:

Game-based social learning proved an effective solution for company learning and implementation needs. The dynamic platform and its advanced management system allowed participants and managers alike to receive high and immediate values during the project.