ViewletBuilder is one of those authoring tools that I had never had a chance to use until I was ready to review it, so this review is not based on years of experience; rather, what you’re getting here is a fresh look at ViewletBuilder 7.

ViewletBuilder is available in three versions: Windows, Macintosh, and Linux, but they are not all equivalent. Table 1 shows the platforms available. See more at www.qarbon.com, where you can also download trials of each version below.

Table 1. The Platforms and Versions

This review covers the Windows Enterprise version, which contains the most features. First, a full confession: Perhaps it’s the name with its diminutive “let” suffix, or its low price, but in all honesty, I was not ready for the level of sophistication and power I found in ViewletBuilder.

When you start a new project, you will see the options in Figure 1 available to you. As you can see, you can create different types of screen captures, or you can start by importing a set of images or a PowerPoint file. You can also create a separate quiz project. 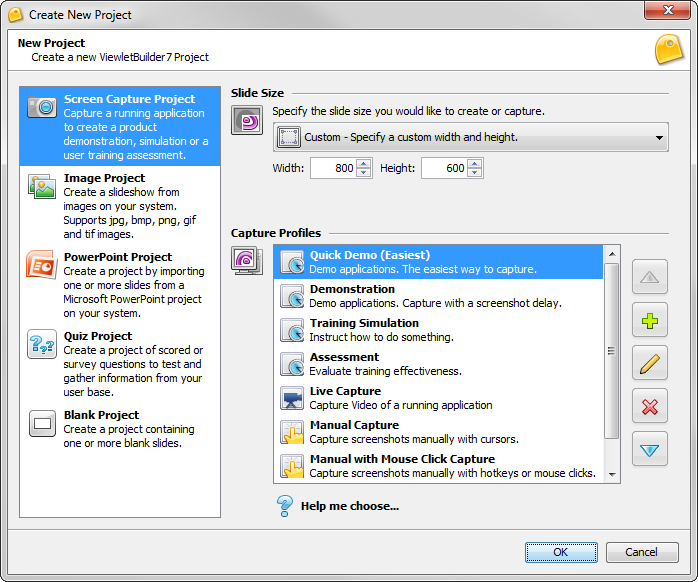 If this looks vaguely familiar, it probably means you use a competing product that offers similar features. However, the similarities are mostly skin-deep. There are differences between ViewletBuilder and other tools. As is true of all tools, ViewletBuilder has advantages in some areas.

For instance, ViewletBuilder has a pre-installed (but fully customizable) Quick Demo Capture Profile you can use to define an area of the screen and start recording immediately. Start clicking and then click the taskbar icon and you will see Figure 2. As you can see, it also tells you the size of your captured file thus far.

If you click the More option, you then get access to a ton of other options, too. Check out all the tabs in Figure 3. 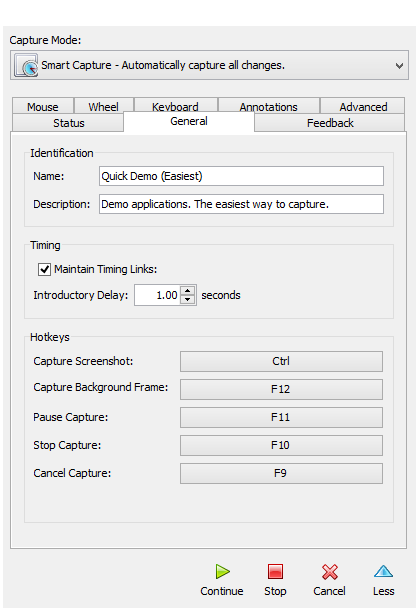 Look back at Figure 1 and you can see that besides the Quick Demo option, you can customize existing Capture Profiles or create brand new ones to build several other project types including interactive training and assessments. You can also create live video demos that capture in high resolution in real time.

Let’s say that’s all you had to do—perform a screen capture. So you’re ready to publish. You can publish to several different formats, as seen below. At this time, there is no HTML5 publish option, though it’s promised in Version 8.

You can choose to publish to an interactive SWF file or to a non-interactive movie in both FLV (Flash Video) and standard MP4.

This will result in a series of screenshots, one from each slide of your file. You can then save the screenshots into an Adobe Acrobat PDF document, a Word or RTF document, an HTML file, or a straight set of image files and save the result to a local, network, or an FTP drive.

You can choose to create an interactive Windows, Linux, or MacOS application. Save the result to a local, network, or an FTP drive.

Publish a SCORM deployment ZIP package with all the files needed to plug directly into and communicate with a learning management system that uses SCORM 1.2 or SCORM 2004. Both versions provide options.

The ViewletBuilder interface may also look a bit familiar if you’ve used other tools, but with some unique capabilities; see Figure 4. 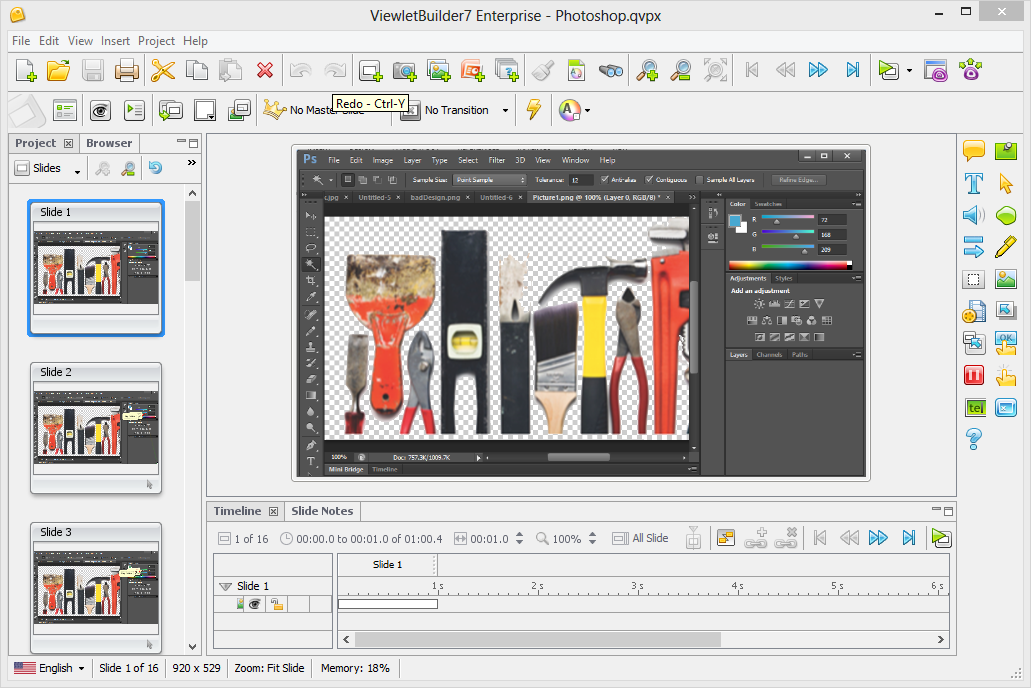 Note at the bottom left that you can switch the interface between English and 14 other languages.

Whether you start with a blank file or already have a file you’ve created from a screen capture, from PowerPoint, or from image files, you can add many more types of objects, both interactive and non-interactive, from the Insert dropdown list. Figure 5 shows a representative list.

You can always insert a question type wherever you like, and, by selecting a scoring method, determine if it will be a quiz (scored) or a survey (non-scored) question. Question types include those in Table 2. Each can be scored or regarded as an unscored survey question. If you create a quiz or survey project from scratch, you can choose to insert all the questions you like all at once.

Some limitations exist in ViewletBuilder, as they do in every tool.

Qarbon ViewletBuilder is a full-featured authoring tool at a very reasonable price. It’s the only mainstream tool I’ve seen with versions for Windows, MacOS, and for Linux as well, albeit it with different feature sets. The folks at Qarbon seem bent on providing lots of help, even including a live chat window during business hours. I started out not expecting much, but now am convinced that this is a tool well worth considering for your eLearning development.