I have written many authoring tool reviews, and this is the first time I’m writing about a tool that is being reviewed not only in publications of interest to eLearning developers, but also in PC World Magazine and other consumer periodicals (see the links at the end of this review). In fact, Camtasia is a tool that has proven as popular with video production personnel as with those who are creating learning applications.

If you’ve used Camtasia before, it’s important that you know that Camtasia 8 is a reboot, rewritten from scratch. As popular as Camtasia has been in the past, TechSmith has now amped up the feature set and given everyone a lot more power for creating and editing video, all for the same $299 price (for Windows—a Mac product is less feature-rich, at a lower cost). However, you also have the ability to add quizzes and other interactive elements, and this has become much more elegant and simple in Camtasia 8.

Camtasia has a lot of power under the hood and it is also relatively easy to use.

The features of Camtasia Studio 8

The basic approach to creating a video-based experience in Camtasia does not take long to master, though there are many features that you may not see immediately and that will cause you to smile as you continue to learn them. Figure 1 shows the basic layout of Camtasia. 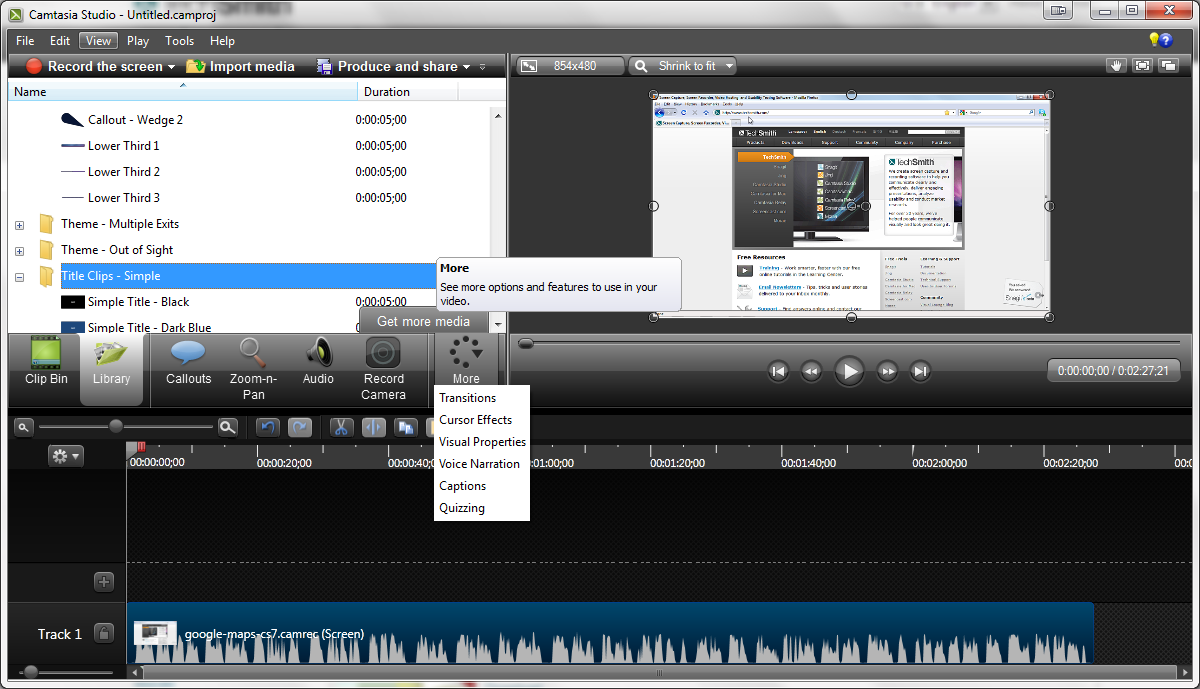 You can create a video in a number of ways:

You get plenty of options when recording your screen.

Create a library of assets

Camtasia comes with many themes that include everything you need in order to have a beautiful and consistent look to your videos. A library of music, title clips, and theme images is available out of the box, and many more are available for free download. You can use these individually or collectively to enhance your videos further.

You get plenty of options after recording your screen. You can:

You can add quiz questions to your video. You can insert:

Note that the above work when you produce to Screencast (see the section “Produce your video” below).

The number of frames per second that Camtasia can capture in the videos it creates has increased from 15 to 30, so now you can provide very professional results. The difference can be remarkable. TechSmith has provided a side-by-side comparison example you can see on YouTube: http://youtu.be/rC2Q2tzViDY.

Take advantage of an infinite number of tracks

Tap into an infinite number of animations

TechSmith has also removed any barriers to the number of animations you can include.

Use the PowerPoint add-in

Besides the regular Camtasia application, you also get a PowerPoint add-in,

, so that you can take advantage of existing PowerPoint files. It allows for several options, summarized in Table 1.

You have several options for the video you’ve created and edited. You can save it:

It’s pretty evident from the above what you may think is missing from Camtasia. It is not a replacement for an eLearning development tool such as Storyline or Captivate, so you won’t get all the kinds of interactivity that you might expect. This is, after all, an excellent video capture and editing tool that has really nice enhancements to allow for some interactivity. On the other hand, much of what you can do in Camtasia is not available in a typical authoring tool, so Camtasia is a welcome addition to an eLearning professional’s tool set.