I have found discussion mapping an invaluable tool in my work and used it often when working in classroom facilitator training. I find it helps me get a view of group dynamics, provide a snapshot-reminder of conversations and what individuals contributed, and it informs my own work. I have no doubt it’s helped me become better facilitator. Now that so much of what we do has moved to the virtual classroom setting (Adobe Connect, WebEx, Zoom, etc.) I’ve been working on ways to replicate it there. Here are some examples of discussion maps from past and recent train-the-trainer work.

In this session I was demonstrating effective facilitation techniques. A trainer friend came to do the mapping. In this case my goal was to mostly provide a number of examples of bad/better use of visuals and had a good many screens to show in just 30 minutes. But I didn’t want it to be just a lecture. I began my presentation in the area shown at the top of the page: the straight line is the projector screen, the ‘sawhorse’ at left was the table with my laptop, and the chart stand is in pink at upper right. The green hashmarks at top indicate how many times I asked questions and how many times I stated information. Blue Xs denote my movement around the room. Green arrows show that participants spoke out to me or to the group, with hashmarks indicating how many times. Following this short presentation the group moved to an assignment in which they practiced creating or finding their own visuals for some material. 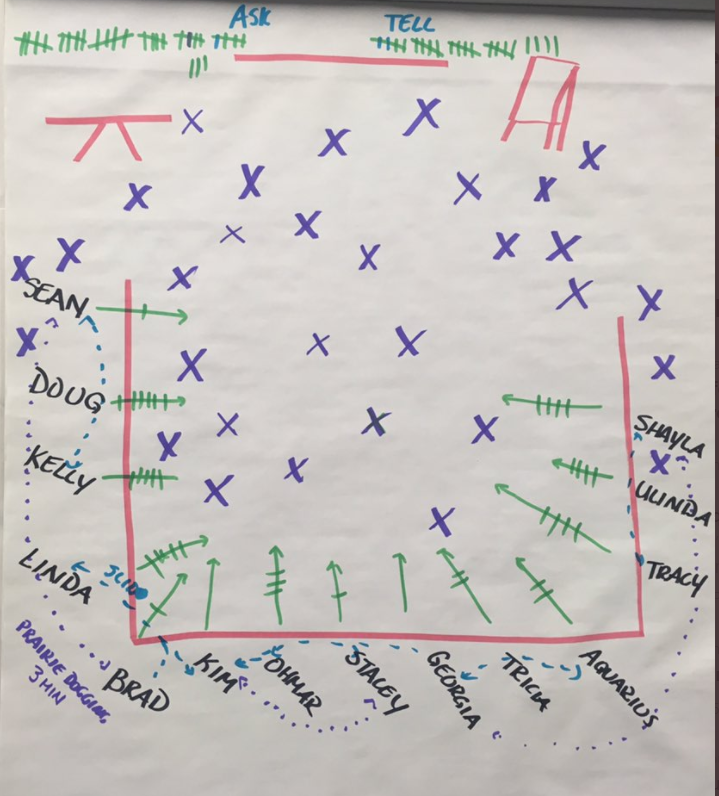 Example 1: Discussion map of 30-minute “using visuals effectively” presentation
You can see here that I am an active facilitator, moving around the room a good deal (perhaps too much?) and speaking directly to people. My presentation style involves a balance of telling and asking. Doug was very talkative, as were a few others, but it appears some, particularly Kim and Georgia, were not very engaged in group conversation. Note, though, the dotted lines down the sides and along the bottom, indicating some participants chatted with each other rather than with the whole class, and it appears Kim and Georgia were part of that. 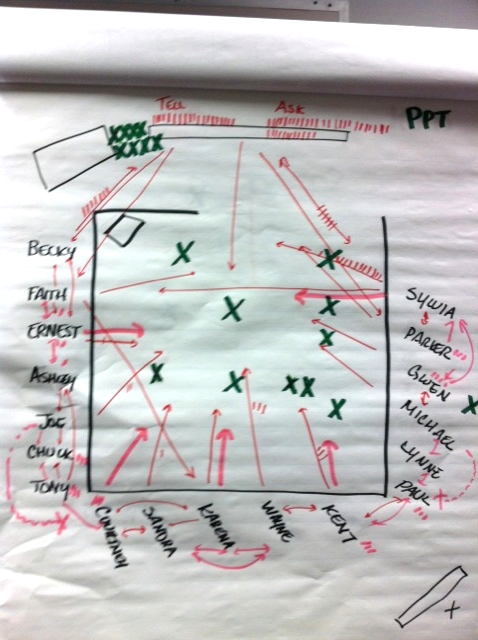 This map is from a later iteration of the same presentation. Before reading on, what does this map tell you? Is it/how is it different from Example 1?

You should be able to see how I changed my approach with the same material. I not standing still but am moving around much less while still approaching people to talk with them. Also, I’m doing much more asking than telling than I was in the first example. Rather than asking the whole group to keep calling out answers to me, which may have invited a few to contribute far more than others, I occasionally stopped and asked them to discuss something with those sitting closest to them. The markings along the sides and bottom reflect that. 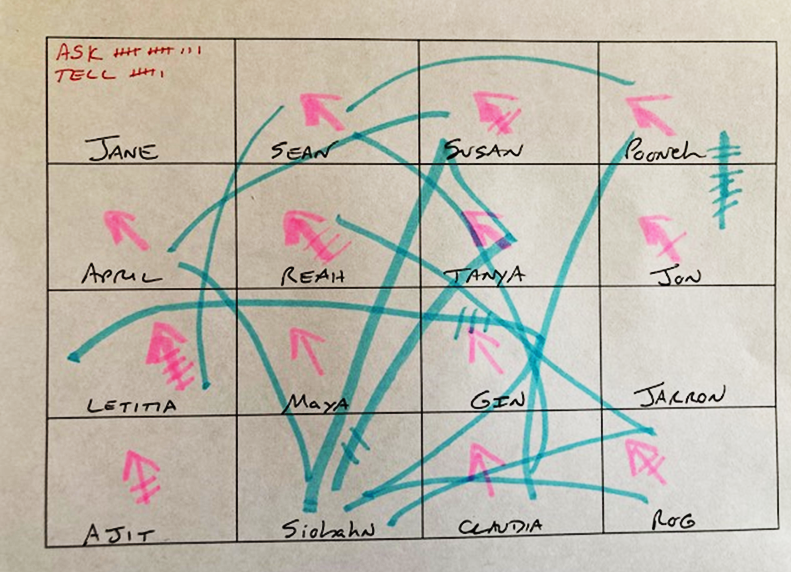 Mapping can also be done in the virtual classroom, particularly if you’re using a product like Zoom where you can get a gallery view of participant faces. It’s a bit more challenging to keep up, and, again, I find it helps to have someone else do the mapping. Pink indicates speaking out to the group or directly to me, and how many times, and blue lines indicate conversation between participants. In this example you can see that everyone but Jarron participated—in fact, he didn’t interact with anyone at all. Ajit spoke out to the group but had no interaction with anyone else. Siobahn was very active.

So what? As the facilitator, this map can tell me a few things about group dynamics and my own work. Jarron was not thrilled about being in the class and tended to be terse or a bit unpleasant; I admit I sometimes avoided him—but I didn’t realize it showed. Ajit tended to throw out some off-the-wall comment and over time the other participants had taken to sometimes just ignoring him. Siobahn had taken a position (that all slides in a presentation should have consistent look and feel) and dug in although others challenged her.

Note, too, that in the virtual classroom additional conversation may be happening in a product’s text chat feature: In this particular example a look at the chat box revealed that Jarron was engaged in a detailed tangential-ish, but still on-topic, conversation with April that Rog had chimed in on.

If “participation” is an expectation or scored element of, say, a certificate program, people can see without much commenting from me whether they are not participating much—or perhaps over participating. Assessing their own participation can be a useful reflection exercise, and can be an eye-opener for some instructional purposes—like new managers learning to listen more than talk.

Discussion maps can also be used to debrief conversations, help to provide a memory jog for the next session, and if done throughout an extended event can help participants view how their own participation, or general group dynamics, have evolved over time. For those of you involved in training trainers and facilitators: They love this. People in my past train-the-trainer course often asked for someone to come map them as they worked. And they can be used in other settings: a facilitator friend who worked at a large bank was often called upon to map management meetings.

An additional feature of the virtual classroom? Thanks to the recording capability you can go back and map conversations later if you like. This can also be a great way to practice learning to map. Detailed instructions for discussion mapping from my book From Analysis to Evaluation (2008, Wiley) are available online. This is not the only way of discussion mapping. Seattle teacher Verity Sayles offers her way of using OneNote throughout a class to capture not only conversation flow, but even specifics of the conversation.