Marc My Words: A Salute to ISPI on Its 50th Anniversary

Long before there was eLearning, before there was Web-based or computer-based training, and even before there were personal computers, there were audiovisual aids, teaching machines, and programmed instruction. And there was an organization, whose early work in these now seemingly antiquated technologies yielded much of what we know and practice today in the field of learning and performance. 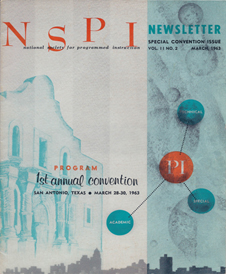 NSPI brought together a host of emerging disciplines, including learning psychology, educational media, instructional design, analytical systems, cognitive engineering, information technology, ergonomics and human factors, psychometrics, feedback systems, organizational development, and communications to create a new overarching field of human performance technology (HPT). This was revolutionary in its day; until NSPI, no one had looked at learning and performance in such a holistic and systematic way.

NSPI pioneers took solid research and turned it into practical applications. They saw learning as one of many means to a larger end – improved performance and results – rather than a single end in itself. This led to broader acceptance of non-training solutions such as workplace design, reward and recognition systems, motivational strategies, and performance support. HPT became the “big tent” where all worthwhile approaches – including training – were welcomed and integrated into a new way of doing things. This paradigm change led to the Society’s third name change in the mid 1990’s – the International Society for Performance Improvement (ISPI) – the name it uses today.

Instead of focusing on a specific solution, HPT focuses on analysis – understanding the performance problem or opportunity from a variety of perspectives – and then crafting a unique set of strategies that have the highest likelihood of success. And when that analysis points to a learning solution, as it often does, and when the situation points to eLearning as a way to deliver that learning, it is the people of The eLearning Guild that often lead the way.

This month, ISPI celebrates its 50th anniversary. (Figure 2) That it has been around for so long, in an era of “disposable everything,” is a testament to its core value of looking beyond any one favored solution – or “flavor of the month” – to embracing a multitude of best solutions, as well as a reflection of the good work of its founders, members, and leaders over the years.

This month’s column inaugurates the third year of “Marc My Words.” I thought that by now I’d run out of things to say (although those who know me would say that’s impossible), but it turns out that there’s so much more going on in our field worth talking about. I feel like I’m just getting started.

For the coming year, I will spend more time focusing on management and “decision-maker” issues, hopefully in a way that has meaning for practitioners as well. But it will not be an exclusive focus, with instructional design and other application issues also in the mix. Add some new ideas as well as some thought pieces on the challenges we all face, and I’m hoping to generate some good dialogue – in the column and back where you work. Let me know what’s on your mind.