A few weeks ago, I came across a really interesting serious game called Foldit. The object of the game is to fold three-dimensional models of proteins into the shapes that would take the least amount of energy to sustain.

The purpose of the game is to find the best solutions for using proteins in real world applications, such as understanding, treating, and curing diseases. Researchers post challenges on the Foldit site, and they then analyze the highest-ranking solutions to see whether those could be used to solve the real-world challenge. In one particularly successful outcome last year, researchers used results from the game to discover the structure of an important enzyme in the Mason-Pfizer monkey virus, an AIDS-causing monkey virus.

After hearing about the application, I downloaded and played with it for a few days. I haven’t solved any medical mysteries yet, but I did get a chance to look at how the game works. The application is interesting on many levels: 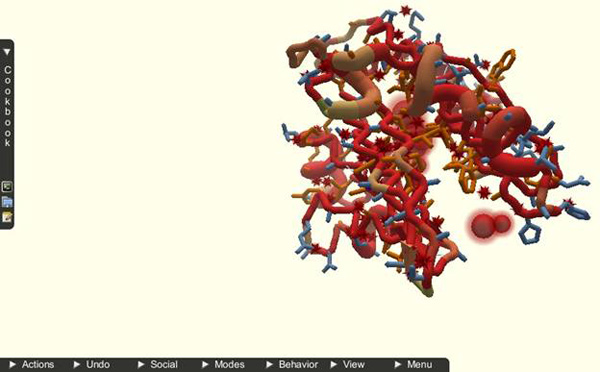 Any one of these points could support a column by itself. Ultimately, though, the most interesting part to me about the whole project is the strategic partnership it must have taken to get the game off the ground. Foldit is the product of collaboration between a biologist at the Howard Hughes Medical Institute and programmers at the University of Washington.

Because the majority of the reporting on this project has come from journals or science reporters, there’s not a lot of published information on how that partnership came into being. The participants may simply have known one another socially or otherwise. The biologist, David Baker, thought of the concept. He wanted it to be a game, and he had the subject matter expertise to explain the rules behind proteins. The programmers, it’s pretty reasonable to assume, brought project management, interface design, and game strategies to the mix in addition to their programming skills.

Working backwards from the final result, it’s also possible to make some guesses about what kinds of roles didn’t have a seat at the table on this project. Given that the solutions to these puzzles could potentially help treat diseases, a fundraiser might have been able to offer some strategies to bring revenue to the project, and maybe even increase players’ engagement. For instance, sponsors might offer donations for every set number of points players earn on the site.

Conclusion (and more to come)