One of the things that differentiates professional design from “throw-items-on-the-screen” design (rookie design) is how well items align with each other. Alignment is one of the four major principles of visual design that Robin Williams discusses in her terrific book, The Non-Designer’s Design Book (read it, if you haven’t already!).

In that book, Williams says, “…nothing should be placed … arbitrarily. Every item should have a visual connection with something else…”

She explains that alignment between items that are physically separated connects these items in your mind via an invisible line. It tells your mind that they belong together.

In the rest of this article, I’ll discuss how to use PowerPoint alignment tools to make the placement of slide items look more professional in preparation for pulling the slides into an eLearning authoring program (the same principles obviously work for preparing presentations, too). Throughout the article, I’m using PowerPoint 2010 and showing PowerPoint 2010 screenshots. PowerPoint 2007 works almost identically.

Because alignment is such a critical design concept, PowerPoint provides a set of positioning tools that you can reach from the Home tab (Drawing group) and also the Drawing and Picture tabs (Drawing group) when either of these context-sensitive tabs are activated. Figure 1 shows the Align menu and the positioning options that are possible using this menu. 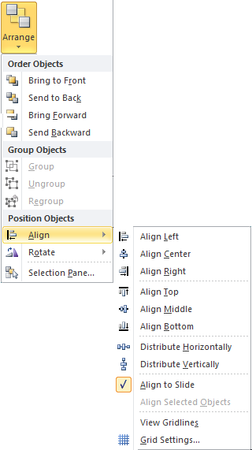 Figure 2 shows menu buttons built in PowerPoint for an eLearning time-management course and placed on a slide. See a problem? They’re not lined up. Not even close.

Figure 2 - Menu buttons for a time management course, not aligned

To align them, I selected them all, and from the Arrange menu, I selected Align?Align Middle. I then selected Align ?Distribute Horizontally so they are evenly spaced, horizontally. Much better! (Figure 3) Because these settings are often confusing, I briefly explain how each alignment setting works in Table 1.

Another way to align objects is to turn on gridlines. If you look at Figure 1, you’ll see a menu item for turning on gridlines near the bottom of the Arrange menu. Figure 4 shows an example of gridlines turned on and objects placed on the screen using gridlines for guidance. I used the gridlines to center the clock and the planner between two of the navigation buttons and to align the clock and the planner with each other (when I took this screenshot, I wasn’t sure whether these two images should be aligned at the top or through the middle).

You can also change the size of the grid by changing the grid spacing (Arrange menu?Align?Grid Settings). This is especially helpful when you want finer placement control of if you have a lot of small items that you need to align.

PowerPoint also allows you to add guidelines to your slides and use these to align objects or divide slides into areas. Guidelines are vertical and horizontal lines that you can place wherever you like on the slide. To add them, go to the View menu and check the Guides checkbox. By default, one vertical and one horizontal guideline appears at the center of the slide (Figure 5). (If you have eagle eyes, you may notice that I decided that the clock and the planner look better aligned through the middle and changed this in Figure 5.) 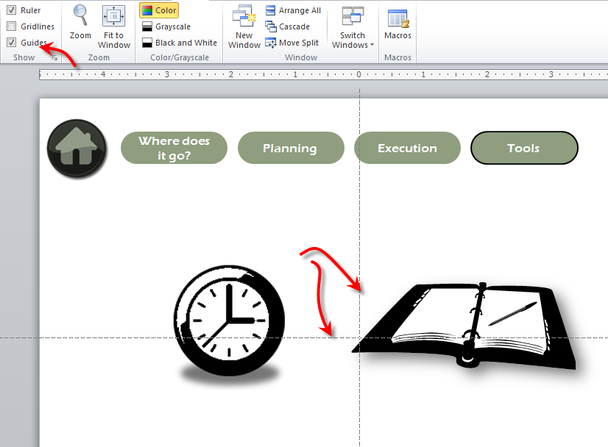 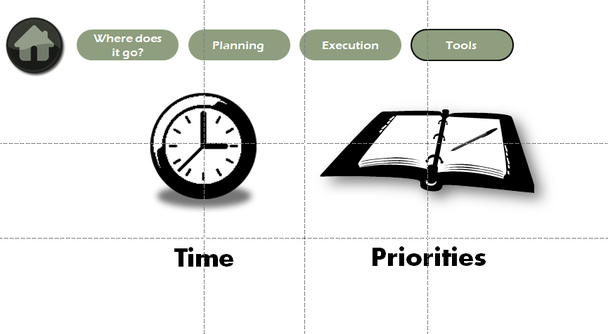