How to Drive ROI on Gamification Initiatives

Learning executives can invest thousands of dollars in gamification initiatives with little reassurance that the investments will pay off. California-based gamification expert Yu-kai Chou has developed a free formula that can help them better understand the behavioral science behind certain games. By applying the principles of his Octalysis Framework to their enterprises’ gamification initiatives, chief learning officers can realize better returns on their investments, according to Chou.

Who is Yu-kai Chou? 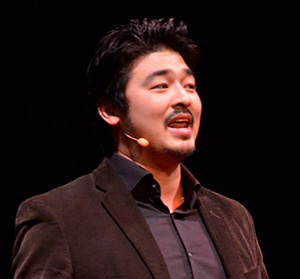 Chou has been working in the field of gamification since 2003. An in-demand public speaker, he has lectured on the topic at Google, Stanford University, TEDx, and South by Southwest (SXSW), and he has consulted with many Fortune 500 companies, including LEGO, Accenture, Fidelity, AIG Japan, Cisco, UPS, and Verizon. He was named “Gamification Guru of the Year” by the European-based World Gamification Congress in 2014 and 2015, and his 2015 book, Actionable Gamification: Beyond Points, Badges, and Leaderboards, is a best-seller in its category on Amazon.com.

Although gamification is a growing workplace trend, Chou says companies could be more successful at implementing it. “Creating a rich gamified experience is much more than simply slapping various game mechanics onto existing products,” he says. “It’s a craft that requires a lot of analysis, thinking, testing, and adjusting.”

Chou has spent considerable time analyzing why individuals are attracted to particular games, synthesizing his hypotheses into what he has christened the Octalysis Framework (Figure 1). The theory identifies eight “Core Drives” that he maintains motivate behavior:

“With many years of trials and adjustments, I believe that everything we do is based on one or more of these eight Core Drives. If none of those drives is there, there is zero motivation and no behavior happens,” Chou says. 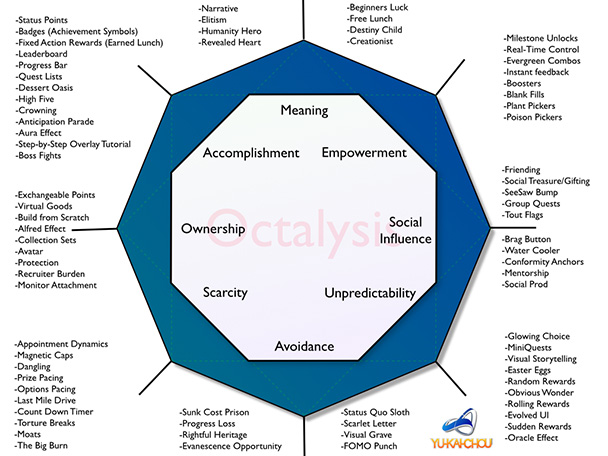 The theory is more nuanced, as users can further separate behavior into categories such as extrinsic or intrinsic; white hat or black hat; and long term or short term. But Chou stresses that even at the most basic level, learning executives can employ the Octalysis Framework tool to analyze and score their own gamification initiatives. They can then harness this information to drive higher user metrics and alter workplace behavior.

“The tool allows people to not only understand behavior, but create the right type of behavior,” Chou says.

Although there are five levels in his Octalysis Framework, Chou notes that level one is usually sufficient for the vast majority of companies trying to create a better-designed gamified product and experience. “Higher-level Octalysis processes are really there for organizations that are truly committed to making sure that they push their metrics in the right direction while improving longevity of a gamified system,” he says.

Chou, who has launched several Silicon Valley technology firms, was once an obsessive gamer. After retiring his controller, he began pondering why certain games are so addictive. “There are a lot of studies as to why games appeal to our brains so much, when we know there are other things we should be doing,” he says. “Games such as Angry Birds have no real purpose and don’t really accomplish anything, yet we can spend five or seven hours a day playing them.”

Four years ago, he stepped down as CEO of his last startup and began writing about gamification. He introduced the Octalysis Framework on his blog, which went viral on Twitter. His theory was translated into more than a dozen languages, and Chou began receiving invitations to present workshops around the world. Fans urged him to compile a book.

Actionable Gamification is an authoritative source that fully explains the Octalysis Framework, providing examples of how universities are using it to increase alumni donations and how companies are relying on it to get consumers to purchase more products, consume less energy, or exercise more consistently.

“Every week, I get emails from companies saying they read the book and it tangibly helped them increase their business metrics,” Chou says.

He notes that publishers in South Korea, China, Taiwan, and Ukraine are in the process of translating and reprinting the book.

The Octalysis Framework is a free methodology; those who can master its intricacies from reading Chou’s book or blog posts can reap the benefits at no cost. For those who prefer more personalized guidance or instruction, Chou offers workshops, online courses, and private consultations.

Chou, who has worked with many chief learning officers, believes the Octalysis Framework can aid them in numerous ways. It can help senior learning professionals understand how the mind works and how to drive long-term motivation. It can also provide insight into why a particular training program might have failed at an enterprise.

“A lot of clients come to me and say, ‘We added a competition leaderboard design to our training program. It drove a short-term obsession, but after six months people burned out or stopped trying, especially among the mid- to bottom tier,’” Chou says. “Through Octalysis they can better understand exactly why that happened, and could have saved six months of wasted time.”