Vistaprint wanted to find creative eLearning solutions that were measurable, trackable, and agile. An innovative eLearning manager had an idea: Take a page from computer programming and hold a Vistaprint eLearning “hackathon.”

Souleimen Achour, the EU manager for CARE learning, who is based in Tunisia, came up with the idea when he and his managers were thinking about how to create better eLearning content. They sought ways to improve graphic designers’ performance, close knowledge gaps, and better serve external customers.

Achour and his managers had identified a need to be “more proactive in addressing operations training requests.” Since the hackathon, they have strived to implement more cross-functional collaboration, he added.

Once the idea took shape, it was not hard to convince his managers to give it a try: “Our director and VP are very supportive when it comes to innovative ideas where we could better support our customers,” Achour said.

Achour and colleague Susan Shay, manager of the instructional design team, defined clear goals for the event, which they supervised:

“We believed that by involving subject matter experts in the creation of learning content for their peers, transfer of learning and knowledge sharing among team members would increase, resulting in performance increases and greater team collaboration within the organization,” Achour said.

The idea took shape: Participants would form teams that would brainstorm ideas for eLearning solutions—and prototype those ideas. The hackathon motto was “Design, Build, Test!”

Five teams met at Vistaprint’s offices in Ahmedabad, India, in February for the three-day event. Each team included four graphic design experts, two eLearning experts, and a coach. The participants were from Vistaprint’s CARE Design Center in India; future hackathons will involve teams from the Philippines, Tunisia, and Jamaica. Participants were tasked with “focusing on performance gaps and content creation to fill those gaps,” according to Achour, who shared his idea at Learning Solutions 2017 Conference & Expo. 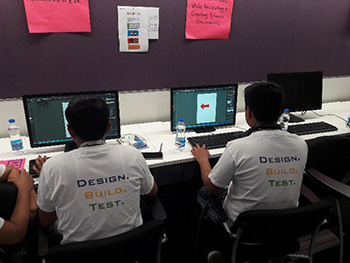 “The results were astounding,” Achour said. Each team created a learning solution, and team members learned about core instructional design and new software tools. Best of all, professionals shared expertise with their colleagues across departments and areas of specialization. 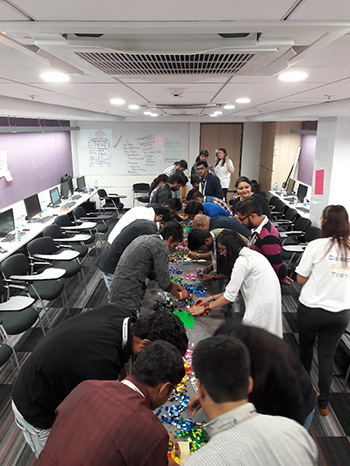 Mufid Khan, a graphic designer who participated in the hackathon, said, “First of all, thanks to AMD Teams and all the facilitators of the hackathon. ... It was a truly awesome experience for me, and I think [it was the] same for all participants. ... Looking forward to seeing you soon for another great experience.”