Getting learners to complete eLearning is only half the battle; what really counts is whether they retain the learning and apply it in their work.

Instructional designers and developers pour heart and soul into creating engaging eLearning, figuring out ways to funnel learners through the courses, measure participation, and assess learning on completion. Even so, depressing statistics tell them that, a week later, learners won’t remember most of the material. Three months down the line? Forget it.

It doesn’t have to be that way.

Bringing in a coach to follow up with learners and gently prod them to apply learning, set and work toward goals, and recall content they learned can improve the “stickiness” of material, whether it’s facts, processes, or “soft skills,” like communication with direct reports or engaging with customers.

Sound expensive? Think again: The coach does not have to be a real person. That’s where Mobile Coach can help. The company’s innovative chatbot-based solution supports and reinforces eLearning to help it stick.

Before founding Mobile Coach, CEO Vince Han worked on using technology to try to drive behavior change around health and fitness activities. He saw that the popular apps tended to get the most use by people who would be active anyhow; the thornier problem was motivating the less-active people to develop better health habits.

“We were really trying to figure out how [we could] apply technology to help someone be more successful in achieving some sort of personal development goal, whether that was keeping a New Year’s resolution, which is very apropos for this time of year, or whether it was going to some corporate-sponsored workshop and learning a skill,” Han said. He heard the same types of feedback around both issues—people had a hard time sticking to their goals or following through on the changes they wanted to make based on the training.

How does a chatbot work?

Han wondered how to better engage learners’ attention. “As we looked into that, we discovered that the prerequisite to being successful in either use case is maintaining a level of mindfulness,” he said. The trick would be to have help—coaching—that would capture and hold people’s interest.

He came up with the idea of a chatbot when, musing about what would get the attention of, say, a new manager who just finished training, he thought: A text message from the manager’s best friend. “We worked backward from that,” Han said.

Han is careful to emphasize that Mobile Coach never tries to trick anyone or pretend that the coach is a real person; instead, the goal is to make the chatbot’s content valuable and relevant enough that the learner will pay attention.

“Being effective, from a training reinforcement perspective, is designing that chatbot in a way where it can join the learner’s circle of friends and family for a period of time,” Han said. It’s not trying to be a learner’s best friend, but it shouldn’t sound like a spammy message that you might get from your dentist’s office, either. He described the goal as a middle ground, using as an example a text conversation he recently had with the host of a vacation rental. It was highly relevant, so it held his attention, but the person was someone he’d never meet, not a friend. The chatbot coach is trying to enter that same role: The content, and therefore the conversation, is relevant to learners because it can help them achieve their goals and get where they want to go.

Once the coach has the learner engaged in conversation, another key to success is not overdoing it. For most customers, Han said, about two interactions per week over two to three months is optimal (Figure 1). Mobile Coach tracks data on all learner interactions and carefully watches whether learners are disengaging or “kicking out” the chatbot—and, if so, what the trigger was. 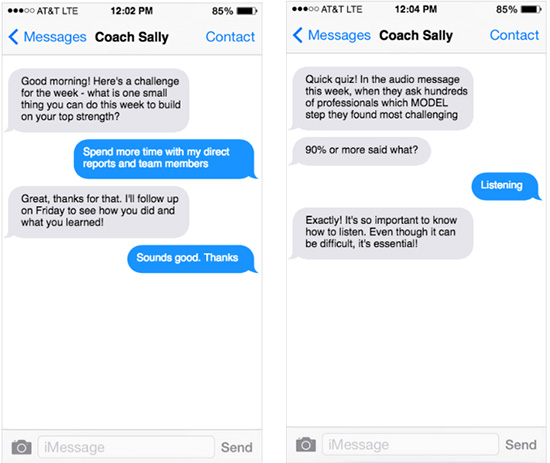 The coach is not intended to become a permanent fixture in learners’ contacts. Most customers use the coach for a few months, but the “relationship” can last as little as four weeks or as long as a year.

Two use cases for chatbots

The formula is working: Mobile Coach’s tracking has found that “a well-designed chatbot will have the vast majority—maybe 75 percent—answering multiple questions, enough questions so that we know that they are engaged.”

Customers’ goals for their learners tend to fall into two “buckets,” Han said:

Mobile Coach is an authoring tool; eLearning developers can create their own completely customized chatbot conversations. The idea is to reinforce existing eLearning or training, with coaching beginning the moment a learner completes the course.

“Let’s say I’m taking a course on my company’s LMS. Ideally, as soon as I hit ‘done’ or finish the assessment that signals the end of the course, a second later I should get a message from the chatbot,” Han said. The continuity and customization should make the chatbot coach feel like an integral part of the course.

The coaching mirrors the language and tone of the eLearning and builds on content and examples the learner has already covered. The coach is intended to be a natural extension of and support for the training, not a new educational experience. Mobile Coach will build the chatbot based on content provided by a customer—or teach the customer’s eLearning developers to write the chatbot conversation themselves.

Learning managers often tell Han that they have “all these great resources on the LMS” that people don’t use—PDFs, videos, slides. The coach is “a great way to push and reinforce and repackage existing [eLearning] material,” Han said. It can ask questions, push out links to supplemental content, and help learners track goals. Every couple of weeks, a learner might be asked to report on progress toward a specific objective.

Mobile Coach encourages eLearning developers to give the coach a recognizable personality and to include some fun elements—animated GIFs, a high five, a joke—to make the interactions fun for learners. “Sometimes it does take a couple iterations of a chatbot script to get it just right,” Han said.

Mobile Coach integrates with a variety of communication channels. In North America, coaches usually interact with learners via text messaging, but in other areas, alternative platforms—such as Facebook Messenger, Line, and WeChat—are more popular.

Feedback from learners using the chatbots has been overwhelmingly positive, Han said; they appreciate the reminders. “Innately, people know that, in the training context, they’re used to forgetting things and not following up. They appreciate it when training is sticking and working for them.”