When a military man talks about disruption in any context it is a good idea to listen! Meet Garry Hearn, until recently the man in charge of designing and organizing learning strategy for British military units covering 44,000 service personnel. Garry was decorated by Queen Elizabeth II for his services to Military Education and Leadership. Now in “street civvies” with Cuerden Consulting, and in demand as a conference speaker, Garry works with futurist Jason Burrows, to bring new thinking to the “disruption” they see happening in the traditional learning space. 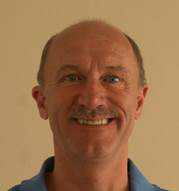 What does Garry mean by “disruption”? “There is a power switch on the horizon. We see the growth of the shared economy and the meteoric rise of companies like Uber. Then there is WhatsApp valued in 2014 at $19B with just 55 employees and contrast that with Morrisons (UK supermarket chain) with 56,000 employees but only valued at $12B. Forty-one percent of Americans now have multiple income streams—they have portfolio careers. Millennials will become the majority of the Western workforce around 2020—and already are in many emergent economies with lower-age demographics.”

Does this matter? What impact does it have? Garry: “Millennials are interested in quick responses to their learning needs, are tech savvy, and want to see a connection between their learning and their workplaces. It is a power shift towards the individual.”

Garry believes that, powerful as it is, 70:20:10 has been applied as a linear model “We really need to see it as a mosaic—dots of appropriate 70:20:10 happening all through an individual’s learning landscape. And that is not organizationally focused because the individual is no longer wired like that. While most of our eLearning is currently focused on organizational needs, the modern worker wants a shift to a space where they can make their portfolio marketable.”

It all needs freeing up. Garry describes it as, “A shift from eLearning to easy learning!” Yet much that is corporate is still set up to prevent that freedom.

Reid Hoffman (founder of LinkedIn) talks about innovation coming from the short “tour” employees who simply transform things (see Hoffman’s 2014 book The Alliance). How do they develop? Many times they will leave one organization to gain knowledge and experience elsewhere, only to return eventually with added value, new ideas, and an extended network. Garry: “Hoffman sees that as a positive feature of organizational DNA, welcoming it, using the fluidity to create allies and to extend the organization’s network.” That contrasts sharply with the old paradigm of restraints of trade and the frequent viewing of “leavers” as traitors.

What is the influence of these phenomena on a military man’s thinking? “In the British Army I recognized that cost was outstripping quality. Agility was being held back by rigid programs and delivery means. So we introduced a whole string of ideas—self-directed eLearning, VLE’s, flipped classrooms—we saw a direct impact on pass rates at training schools. The cost profile went down, reach and speed of reach increased, quality rose.” Proof indeed that the blended approach works!

Garry uses military analogies. “Former US General Stanley McChrystal talks about working with complexity and the failures of applying linear processes in Iraq where Al Qaeda used unpredictability to great effect, appearing, making impact, and disappearing only to re-appear somewhere else. McChrystal now urges the acceptance and enabling of complexity.” The analogy with the changed work place is clear. Technology has a massive role—so another analogy: “ISIS has recruited 25,000 people from a worldwide social network at a minimal cost of making minimal home-made videos posted on a network that it does not own. By contrast, the UK National Audit Office reports the British Army’s £1.3B traditionally based recruitment program was 67% under target in 2014 (adding just 3,600 to the reserve).”

Garry asserts, “Complexity is here. At the moment, we allow it to disrupt ourselves. We need to throw away that doctrine and adopt new methodologies.” Hearn and Burrows have developed a new “7A’s” model (Figure 1) they believe will help organizations understand, adapt, and thrive. 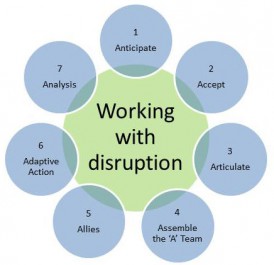 That’s some insight from a military viewpoint—Garry goes further…

“I realized it is about inverting the organizational pyramid. It is about learning to serve in order to be an effective leader. It is no coincidence the renowned Sandhurst Officer Training College has ‘Serve to Lead’ as its motto!”

The problem is our corporate personas do not like that kind of disruption and are slow to react to it—but the warnings are clear!

Garry reflects on it all in Learning to Lead: From Bombs and Benefits to Buckingham Palace (2015).