eLearning Guild Research: Why Failing (While Learning) Is Good

The Guild’s latest research report, Gamification, Games, and Learning: What Managers and Practitioners Need to Know, discusses one of the critical gaming elements used in games and sometimes in gamification, the freedom to fail. The report explains that failure is one of the primary ways that we learn how to master the game.

Imagine a game, any game, where you make a tiny mistake and an insignia appears on the screen: GAME OVER. That’s not how games usually work because chances are, you’d be demotivated and never play that game again. Instead, you typically make a mistake, and because of that mistake learn what not to do in the future. (Kind of like life, if you’re smart.)

Research shows that learning from mistakes is extraordinarily powerful, which is one of the reasons that game learning can be so powerful, and it’s another reason for using game-based learning. In Moving Learning Games Forward: Obstacles, Opportunities, and Openness (see the References at the end of this article), a discussion of using games and play for learning, the authors describe good games and play-based learning environments:

In Moving Learning Games Forward: Obstacles, Opportunities, and Openness, authors Klopfer, Osterweil, and Salen describe how, in play and games, you can learn through doing things that result in what might look like failure but are actually a form of experimentation. For example, a toddler builds a too-high block tower and it topples. In doing so, she learns about what works for a building foundation and the nature of block towers. And so it goes for people of all ages who are learning about anything, whether building a fort, programming Perl, tiling behind a toilet, fixing the gears on a bicycle, or making mosaic jewelry.

Figure 1 shows an example of feedback from the Gamification, Games, and Learning: What Managers and Practitioners Need to Know research report. This is feedback from a previous interaction and, as you can see, the player is now dealing with some consequences. In order for this feedback to be useful, learners must be able to learn from what they did and figure out what to do next. Look carefully for prompts and information from the last interaction. When the player clicks the button, additional maps become available. 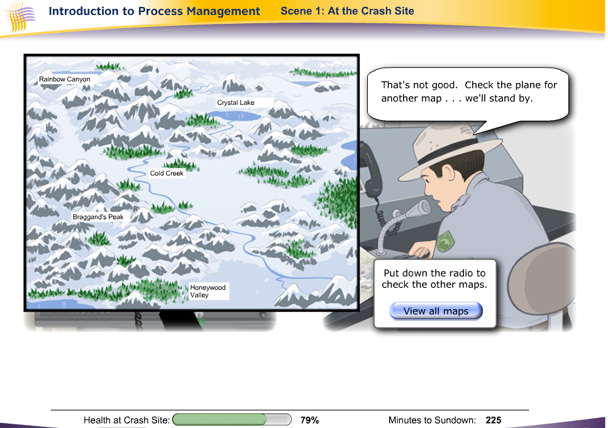 The value of the do-over

One of the problems with most instruction is that we don’t include much allowance for failure or what-if scenarios in the design so people can see what would happen in different circumstances. And make no mistake; in real life there will be failure and the need to try different scenarios. Our linear training may actually undermine confidence and competence to deal with failure and different scenarios because these situations are often not included in training situations. And when they are, they are sometimes included as terrible, you-should-have-known better options rather than possible options that might not have worked as well.

In his book, What Video Games Have to Teach Us about Learning and Literacy, James Paul Gee provides a set of principles encountered during the mastery of games. His psychosocial moratorium principle explains that games allow us to take risks in a space where real-world consequences are lowered, which is akin to the freedom to fail that I’ve been discussing. As a result, experimental or “what-if” behavior can thrive under these conditions. The player can see their consequences in the game world but even the most significant losses can be remedied by starting over.

In games, you are allowed to try over and over again. Not only are you allowed to, you want to. When playing with others, you also get to learn from their mistakes. Tell me this doesn’t sound like the perfect learning environment.

Gee, James Paul. What Video Games Have to Teach Us About Learning and Literacy. Second edition. Macmillan, 2007.