In 1970, Tokyo Institute of Technology robotics professor Masahiro Mori first wrote about the uncanny valley, describing how robots that look almost but not quite like real people often induce a feeling of revulsion instead of increased affinity. In other words, human-like robots creep us out. Since that time, we’ve discovered that the uncanny valley concept also applies to animated videos, video games, virtual reality (VR) experiences, and most other media that visually depict humans. Thus, if you’re making an eLearning experience that depicts people using 2D or 360-degree video, video games, VR, AR, or any other visual medium, then you need to understand the uncanny valley, and you need a strategy for preventing its creepiness from seeping into your experience.

What is the uncanny valley?

In his article, Mori included a chart similar to Figure 1. 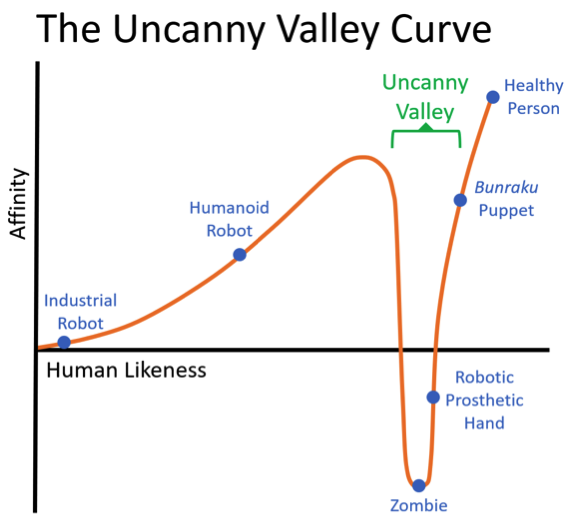 This chart shows that more realism is good, up to a point. When a representation of a person is highly realistic, the handful of non-human aspects (e.g., plastic-seeming skin, unreal facial expressions, unnatural movements) stand out. Viewers tend to focus on those aspects. If the representation isn’t quite real enough, it can be unsettling, jarring, or even repulsive for viewers. However, when a representation is intentionally unrealistic, then the few humanlike features (e.g., expressive eyes, professional voice actors, character development) stand out instead, and viewers can connect emotionally with the character. Disney and Pixar understand this concept well, which is why their characters are never photorealistic but often lovable, such as the toys in Toy Story or the characters in Up. In contrast, the almost-but-not-quite photorealistic characters in the movie The Polar Express creeped out film critics and children alike.

Unfortunately, creating photorealistic animation isn’t realistic for most eLearning professionals. The technology does exist to create more or less photorealistic animated videos and video games. This is why some people have claimed, perhaps a bit prematurely, that the uncanny valley problem has finally been solved, as some animated games and videos are undoubtedly realistic-looking. However, the movie and game studios that have disputably “solved” this problem have effectively unlimited budgets and large, extremely talented teams of animation artists and developers. A few smaller indie game studios are also making inroads toward affordable and fast photorealistic animation, but the financial cost, time, and skill required are still substantial. So unless you plan to spend several years and millions of dollars creating a single photorealistic eLearning experience, stylized animation is currently a much better option.

Stylized animation may not resonate with viewers quite as much as photorealistic ones, but at least stylized animation won’t creep people out. They’re also a lot faster, cheaper, and easier to make. Further, stylized animation presents infinite possibilities. That is, we can use anime styling (Spirited Away), blocky robot characters (Wall-E), stick figures (XKCD.com), winged elf puppets (The Dark Crystal)… we’re limited only by our own imaginations.

Generally speaking, there are two types of stylization that will allow you to avoid the uncanny valley:

Over-exaggerated stylization is more difficult and often requires graphic artists to do well. The key is to create a consistent artistic style that doesn’t distract from the experience. You can watch video games (on Twitch) and animated films for inspiration, and you can even search and download different character designs from game engine asset libraries such as the Unity Store.

In contrast, minimalist animation can be useful for simple training games because they’re fast and cheap to build. Unfortunately, minimalist animation is often not very believable, and it’s harder for viewers to emotionally connect with the characters and the experience. Thus, for VR and other more immersive or interactive games and experiences, you’ll likely want to use over-exaggerated stylized animation.

Other strategies for avoiding the uncanny valley

Other ways to avoid creating experiences that fall into the uncanny valley include focusing on character development, narrative, nonlinear design strategies, creating presence, game mechanics, and other less visual elements. We can also adopt strategies developed over the centuries by puppeteers, including focusing on human-like character movement such as walking, breathing, shifting weight, and blinking.

Lastly, don’t forget the sound. High-quality immersive audio is arguably more important than visual realism in VR and video games. Fortunately, it’s relatively inexpensive to hire professional voice actors and audio engineers to record and produce your audio tracks. If your budget is especially limited, you can even record the immersive audio tracks yourself in the aforementioned DIY 360 video studio.

Until the time when photorealistic animation can be made quickly and cheaply by individuals without animation and design expertise, the uncanny valley will continue to be problematic for eLearning professionals who are creating VR training experiences and serious games. Fortunately, most of us aren’t trying to wow the world with our graphics. We’re trying to teach and train people, and we don’t need perfectly human-like CGI avatars to do that. Using the strategies described in this article, the uncanny valley is an entirely solvable, or at least avoidable, problem.