The illusion of choice design element was a revolutionary change to compliance training at CarMax. The illusion of choice is a method of making the learners feel that they are in control. The learners must complete a set of required modules in the annual culture of integrity (COI) training in order to receive credit for the course. However, the change we implemented gives them the ability to go through these requirements in any order they choose, and as their schedule permits. Implementing this concept provided the learners with a sense of control they never experienced before. By using the illusion of choice we were able to greatly increase the value of the course in unexpected ways. What began as a way to make the course more visually appealing resulted in retention of the lessons we were teaching.

We worked with the legal department, which sponsors the COI training. One of the big changes we made for the 2010 and 2011 courses was to use less text on the screen. We were able to incorporate the required information into a series of storylines based on the content. This allowed us to use still pictures to tell each story in a visual way. The storytelling and image use made for a better product, but because the course was still in a linear format, it still essentially trapped the learners once they began the course.

CarMax is a retail organization, with roughly 85 percent of our associates working in one of our stores. A course that requires associates to sit down for a complete, uninterrupted 20- to 25-minute training session can create significant issues in terms of productivity at the store. The challenge every year with COI is how to design a course that meets all the requirements of the legal department, while creating a minimal impact to the store associates.

The solution became apparent during the design and development phase for the 2012 COI refresher. The first step was to make a more visually appealing course, and we decided to develop the course to look like an iPad (Figure 1). The course ran inside what appeared to be an iPad frame, and each of the storylines had a large icon to indicate where the learner was to start. 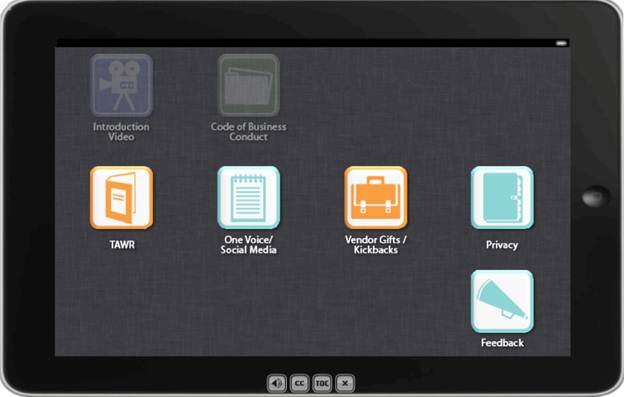 Figure 1: A simulated iPad with icons for the storylines provided more visual appeal

The next improvement came in the course functionality. Previously we developed courses in a linear style, so once the learner started it they were stuck in the course. In order to address the frustrations caused by the linear structure of the older courses, we decided to use the branching and bookmarking capabilities of Captivate 5.5.

The easy part was setting up the bookmarking capabilities. With bookmarking turned on in Captivate, the learner could exit the course at any time and return right to where he or she left off. This may seem like a simple thing, but it resulted in one of the biggest compliments we received. In the past if somebody exited a course they had to start again from the beginning. This was the first time we had implemented bookmarking, so we emphasized to the learners that they could exit and return to a course without penalty.

The more challenging improvement revolved around creating the branching scenarios. After the legal department wrote the storylines we had to cover four main topics. When learners took this course they had to complete each of the four topics. Now, we already had an idea that the course should be branched; the challenge was in developing a course that not only branched, but which also required the learner to complete all topics before receiving credit for the entire course.

The solution came in the form of variables, scoring, and advanced actions. We created a variable for each of the four required topics. When a learner reached the end of a topic, the software scored the variable as complete and recorded the completion. When this happened, the topic’s icon on the “iPad screen” became shaded, providing a visual indicator that the learner had completed the topic.

The combination of the bookmarking and branching (requiring variables, scoring, and advanced actions) gave the learner a level of control that was new for this kind of course. For the first time, learners at CarMax had the ability to navigate through a course in any order they desired. Once a learner completed all four topics, the software would present a prompt to exit the course and then credit the learner’s completion in the CarMax learning management system (LMS). This satisfied the legal department’s requirement for every associate to complete all four topics.

What would possess a learner to move through a course in an order other than starting at Topic 1 and moving along to Topic 2 and so on? Information was the key. In the iPad image to start the course, the icon for each topic provided the learner with the estimated time to complete that topic (Figure 2). The adage about “information is power” was very true here. In a retail environment, the world moves quickly. If a sales consultant was next on the list to assist a customer, they could now estimate whether they had the time to complete a portion of the training. 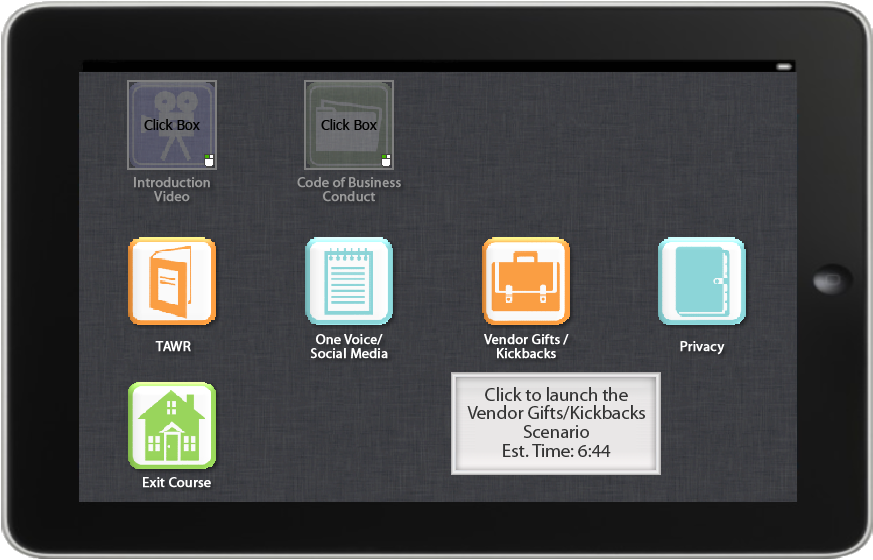 The learner could look at the training and choose a topic that would take over six minutes (6:44) to complete. Then, with bookmarking enabled on the course, that same learner could exit the course and go work with a customer. When they finished with the customer they could go back into the COI course and pick up right where they left off.

The first time the learners entered the 2012 COI refresher we told them about their new navigation abilities. After that, as planned, they were able to move through a course at the pace they wanted and in a way that fit the time they had available.

The customer for this project, the legal department, was extremely satisfied. It was able to deliver the required training in a style that garnered better feedback than the previous versions. The new design elements allowed learners to navigate through the course in any way they wished, while legal could rest easy, since no associate would receive credit for the course until they completed all the prescribed topics.

Then there is the learners’ perspective. We told them that, although they must complete all four topics, and the topics weren’t linked in any way, they could go through them in whatever order they wanted. In addition, learners could now start and stop topics when they needed to. The feedback from the learners on the 2012 COI refresher was overwhelmingly positive.

Initially,creating a shorter version of this course was a goal. The most impressive feedback was a consistent feeling of how much shorter and easier to manage the 2012 COI refresher was when compared to previous versions. Ironically, this was inaccurate. The feeling reported by the learners was purely subjective.

The 2010 and 2011 versions of the COI refresher were each approximately 20 minutes in length due to the narration that accompanied them. The 2012 COI refresher was 24 minutes in length, a full four minutes longer than its predecessors. How can you explain the fact that learners could view a longer course than its predecessors as being less time-consuming? The simple answer is that the illusion of choice provided the learners with a sense of control that allowed the learners to parse the course as they needed.

Longtime associates provided feedback that the new compliance training changed their behaviors and helped them realize how important the CarMax COI is to them as associates and to the company in general. Previously, we narrated these courses in combination with text on the screen. The legal department has several key points they must make throughout the course, so by the time the narration is complete, the course is 20 to 22 minutes in length. As you can imagine, a course of that length with text on the screen and a voice reading it does not make a great impact on the learner.

The 2012 COI refresher yielded an excellent completion percentage rate, greater than 99 percent. The feedback provided reinforcement that this was the right design methodology. In addition to the course feeling shorter, the feedback was overwhelmingly positive in terms of retention. Tenured associates told us that although they took this course every year, now, more than ever, they felt they had learned skills that applied to their position.

CarMax delivered training in a way that allowed associates to fit it into their availability, rather than having to create time to complete required training. This was a win for all those involved, and proved to be a great benefit to our business.