Working Smarter: Informal Learning in the Cloud by Jay Cross and Friends

One of the things I like best about Twitter is the collegial, friendly fire-ish banter among L & D professionals. One of the most active of these professionals is the prolific Jay Cross. Jay, with his colleagues in the Internet Time Alliance, has recently produced the 2010 version of his “unbook,” Working Smarter: Informal Learning in the Cloud. 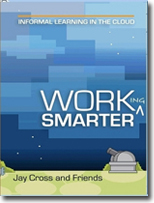 Among the topics often up for grabs lately are ideas around informal learning and the networked learning landscape of the 21st century. Those in the quantitative data/metrics/benchmarking camp argue against the legitimacy of the notion of “informal” learning. As often as not, they claim workplace learning is too important to be left up to happenstance, and requires planning and careful, thorough, design. Cross is clear, though, that he is drawing the “kill the courses, shut down the training department” line with a dramatically heavy hand, admitting that he uses it as much for shock value as anything else, while trying to put forth the idea of workplace learning as different from the traditional view of training course. He also asserts that “informal” does not, as it so often seems to be interpreted, mean “haphazard” or “random.”.

Cross acknowledges the time and place of traditional training approaches, particularly for novices (although he questions the decision to put so many resources there rather than with supporting better producers). But seasoned workers, he rightly notes, will not flock to workshops and traditional classes, as they have work to do. Making it easier for them to get to information, to find one another, to learn through collaboration and by accessing meaningful self-service performance support, will strengthen the organization and “help sharp people become sharper.”

From the abstract to the specific

As I said on Twitter one night, “I am 93.2% suspicious of statistics about concepts of abstractions like ‘learning’.” While the data we have all seen – along the lines of “80% of workplace learning occurs outside the classroom” – may be appealing, and so quotable, we know we can’t actually measure anything like “learning” in these terms. But we do know that people learn at work all the time, every day, more from one another (even if that “other” is a person who has uploaded a video tutorial, or updated a Wikipedia page) than from anything that happens in a classroom. We know that peer groups and communities exist to share knowledge and support performance, even if they’re bootlegged and kept under management’s radar. We’ve all experienced a need-to-know moment, made better or worse by how quickly we could put our hands on the right information or find the right person to ask. Doubt me? For the rest of the week, as you go about enacting your work, ask how much of what you are doing came from anything resembling a traditional classroom or e-Learning course.

Cross leads the reader on a tour of informal, networked learning and performance support, and helps move the conversation from 50,000 feet to 50. This “unbook” is a compilation of his own ideas as well as interjections from his colleagues in the Internet Time Alliance (Harold Jarche, Jane Hart, Charles Jennings, Clark Quinn, and Jon Husband), with chime-ins from many others. There are checklists, tools, and images, charts and provocative questions. And there are honest remarks about the state of learners, many of whom need to stop waiting for directions and start becoming self-directed.

For me, the most value in the text comes not from the parsing out of the finer points of informal and formal approaches, but the articulation of the difference between training and learning. Food for thought, from Cross: “If you were to create the organization’s learning and development function from scratch, what would it look like? Are you still doing huge, expensive training-based software rollouts, or shifting the effort into on-point performance support? Have you taken charge of your organization’s learning function, or just training?”

A word about the book itself – it claims it is not one. It’s an unbook, updated every year or so, and published by “Jay Cross and friends,” his colleagues in the Internet Time Alliance Group. Updates appear on Jay’s Internet Time blog http://www.internettime.com so, if they strike your fancy, purchase a bound or e-copy update from Jay’s site, from Lulu, or from Amazon. Where traditional books exist as editions updated every few years, often out of date before they even make it to bookshelves, this unbook is always in Beta. Be aware: While Working Smarter is organized into chapters, it is not the formal, tightly edited, unified work that some readers will expect from a traditional book. I found the organization refreshing, and the get-to-the-point-already style very effective.

You can also find Jay on Twitter @jaycross, where he’s a frequent participant in the weekly Thursday night #lrnchat sessions that I help moderate. Join us! 8:30 to 10 PM ET.