For more than a decade, the Guild’s salary and compensation reports have been recognized as the industry’s most trusted source of data on eLearning professionals’ salary and compensation. In our just-published 2017 eLearning Salary & Compensation Report, we introduced new tools and resources for getting started on your own salary research and implementing a salary strategy that works for you.

In this article, we take a deeper look at an important topic included in this year’s report: the relationship between salary, academic degrees, and professional certifications. In addition to a discussion of this key issue, we also present a simple tool to evaluate where you stand in terms of the costs and benefits associated with obtaining a degree or professional certification.

Salary benefits of an advanced degree

As we have seen from our year-over-year compensation data, the level of education one attains has a substantial impact on average base salary.

In our 2017 report, education and salary comparison data (Figure 1) show an understandable progression in average salary from those in the aggregate education category (i.e., high school, some college, associate degree, trade school, and technical college) to those with doctorates.

However, some questions still remain about these data. For example, it is not clear why those who fell into the 2017 aggregate category (i.e., high school, some college, associate degree, trade school, and technical college) earned an average salary that was only 4.01% lower than the average for those with bachelor’s degrees: $77,583 as compared to $80,827.

This year, however, we looked deeper into the compensation benefits of educational credentials and widened our focus to include the salary impact of academic degrees plus professional certifications.

Salary benefits of a professional certification

Research indicates that professional certifications can have a positive impact on overall wages, even if you already have an academic degree. Regina Robo, writing for Salary.com, notes, “Certifications and memberships in professional organizations or trade associations can have a positive effect on pay. However, if a job calls for a certification you don’t have, you might not get the job or your pay might be set at the lower end of the range. Some employers require employees without certifications to work toward them.” She goes on to advise that if you have a professional certification that is considered optional for your job, it can still serve to help you negotiate for a higher wage (see References).

In more specific terms, both the Professional in Human Resources (PHR) and Senior Professional in Human Resources (SPHR) certifications have proven their wage-earning value in recent research studies. According to a 2013 research report from PayScale (see References), “The data shows human resources professionals with the PHR and SPHR designations [move] through the career labyrinth faster and make more money than those who lack the certification. This pattern holds across all industries as well as the largest metropolitan areas.”

There seems to be less agreement about the market value of the Certified Professional in Learning and Performance (CPLP) credential, offered by the Association for Talent Development, and the Certified Performance Technologist (CPT) credential, offered by the International Society for Performance Improvement. One can find positive reviews of these two certifications, as well as other, less positive opinions. (See the entire 2017 eLearning Salary and Compensation Report for these sources, as well as citations for all references.)

This year, in addition to the standard questions about education level, we asked survey respondents to tell us whether they had a professional certification and, if they did, which certification they held.

Of the 1,056 respondents who answered this item, 625 said they did not hold any of the certificate options that we listed in the survey. Of the 431 remaining respondents who held one of the credentials we listed, we reported only those certifications held by at least 20 respondents.

Of this smaller group (Figure 2), the largest number of respondents—68—held a PMP certification, followed by 62 who held a CPLP credential. 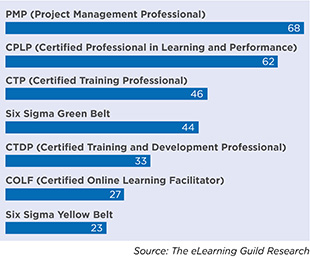 Comparison of US degree holders with and without professional certification

It is clear that advanced degrees and professional certifications can enhance opportunities for eLearning professionals to advance in their field and earn an optimal wage. But how can they best use this information to help in individual career and compensation planning?

In 2015, we introduced a new section of the annual report called “Taking Action on This Year’s Salary Data.” This was done in an effort to provide actionable, practical suggestions for utilizing the data provided in the report.

In 2016 and again this year, we updated this information with current references and additional guidance that should enable you to go beyond just reviewing the salary findings in this report and developing your own salary action plan. The first step in this process is a self-appraisal of your salary negotiation knowledge and skills, as well as a self-appraisal of your current compensation plans and goals.

In this year’s report, we provide information and tools (“planning worksheets”) that enable you to calculate benchmark salaries for a number of different compensation planning scenarios. Instructions for filling out the worksheet can be found in Appendix 4 of the salary report, and are briefly summarized as follows:

Her agency likes to promote people with good skills and master’s degrees. Therefore, Renee has worked hard to complete her bachelor’s degree recently and has already started saving money for a two-year master’s degree program.

However, Renee wonders if the salary difference is really worth all the extra effort and money she would need to invest. Her current salary is $87,452. Philip, her supervisor, has been encouraging her to move forward with her plans for graduate school and has explained that their company has a tuition reimbursement program that will cover part of Renee’s tuition and books. He is also willing to adjust her work schedule so that she has more flexibility to attend daytime classes.

Note: The figures referenced in the “Data Sources” column (Table 2 below) appear in the 2017 eLearning Salary and Compensation Report. Please see the report for the figures that provide these data, and use the figures to calculate your own values for the “Adjustments” column(s).

However, a postgraduate degree would give Renee a number of other long-term advantages and opportunities that she might not have now. For example:

Obviously, there are many complex factors—in addition to education level and professional certification credentials—that come into play when benchmarking 2017 compensation scenarios.

Our goal in this article, as with the entire 2017 salary and compensation report, is to provide practical tools and current, comprehensive, and relevant information in order to help eLearning professionals build their knowledge and take effective action on their individual salary plans.

Robo, Regina. “Eight Things That Can Boost Your Pay.” Salary.com.