With publication of the 2016 US eLearning Salary & Compensation Report, the gender pay gap continues to be a highly controversial topic, as it was for last year’s report. When we did our 2015 survey, a large number of salary report readers said they wanted more commentary and research about gender pay differences in a future report, while others said gender was not an issue for them and they did not want more discussion of that topic.

Our sense was that we should include more research and information about this important topic in this year’s report and other Guild publications. In this follow-up to our 2016 salary report, we focus on additional information regarding the US gender pay gap.

First, a few basics. Our analysis of gender and salary variables for 2015 was based upon the following demographics:

US average base salaries and gender

Figure 1: US average salary by gender

US average total compensation and gender

This year’s data provided us with an overall view of the US average total compensation (Figure 2). 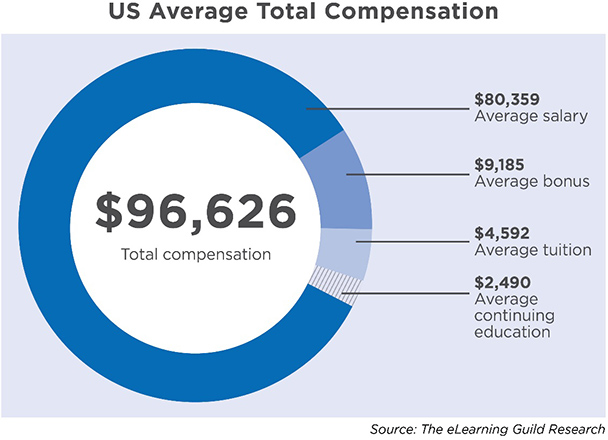 The US average bonus is $9,185. This US average is almost exactly in line with this year’s global bonus average of $9,036. (See the complete salary report for more discussion of merit-increase timing as this relates to average amount of bonus.) 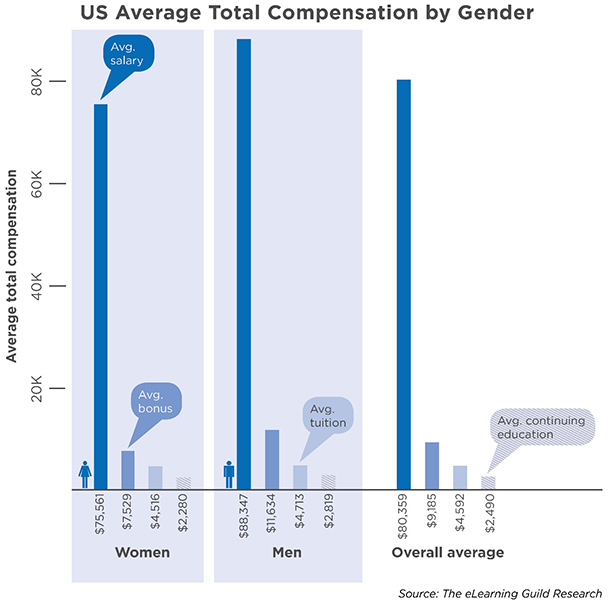 It may come as a surprise to some that there are strong opinions about the existence of what is called the “gender pay gap.” Our purpose here is only to frame the controversy and suggest some additional reading so that readers can form their own opinions on the matter.

Viewpoint: The gender pay gap is real. The American Association of University Women defines the pay gap as follows: “The difference in men’s and women’s median earnings, usually reported as either the earnings ratio between men and women or as an actual pay gap. … The median value is the middle value, with equal numbers of full-time workers earning more and earning less.”

In a report (see References), the organization also states:

Viewpoint: The gender pay gap is mischaracterized. In stark contrast, Hanna Rosin reported on “The Gender Wage Gap Lie” for Slate back in 2013 (see References), and said this:

Viewpoint: The gender pay gap is overblown. Consider this other viewpoint from Romina Boccia at the Heritage Foundation (see References):

The gender pay message can be confusing

Not only are these viewpoints conflicting, but the statistical data and analytical interpretations reported in our national media can be confusing at best and misleading at worst. For example, in some analytical circles and news reports, the gender pay gap seems to be shrinking.

A case in point: In September 2015, Wall Street Journal writer Eric Morath reported, “The gender wage gap narrowed to the lowest level on record last year, but for every dollar a man earned women took home 21 cents less, on average” (see References). The article went on to say, “Women working full-time, year-round jobs earned 78.6% of what similar men did in 2014, according to a Census report.” As shown in Figure 1, “that’s the smallest gap on record back to 1960,” Morath writes. “The latest reading marks a narrowing from 77.6% in 2013, but the change is not statistically significant. In fact, the pay gap hasn’t changed meaningfully since 2007, when it was 77.8%.” 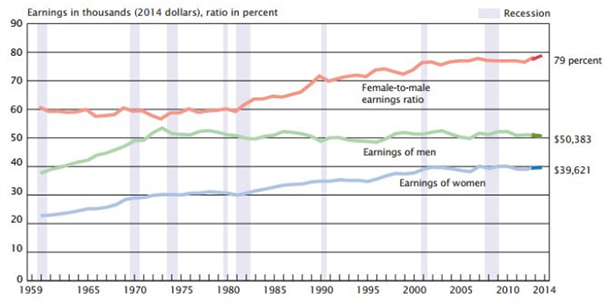 The Wall Street Journal took a slightly less positive viewpoint in October 2015, when Morath reported, “The gender pay gap is widening again because men’s earnings are growing this year at twice the rate of women’s” (see References). Morath continues: “The median weekly earnings for full-time male workers was $889 in the third quarter, the Labor Department said. … That’s a 2.2% increase from a year earlier. Meanwhile, full-time female workers’ earnings were $721, up 0.8% from a year earlier.”

It can be a somewhat confusing message: In the first article, the newspaper reported that “the narrowing of the gap last year was largely a reflection of stagnant male earnings, rather than a robust increase in pay for women.” Then, just a month later, it concluded as follows: “The latest data marks the third straight quarter that the increase in male earnings was at least double that of female workers. As a result, women who work full time earned 81.1 cents for every dollar a man earned from July through September [2015]. That’s down more than a penny from a year earlier.”

Gender pay differences: where do we go from here?

If you believe that the status of gender pay and equality needs to be improved, you may have reason for optimism. Consider, for example, McKinsey & Company’s position on the “road ahead” for gender equality. A recent article in McKinsey Quarterly (see References) states:

To the extent that private and public institutions have made the necessary commitment from the top and are working to intervene in the ecosystem of change, we are confident they will, given time, reach their goal. Too many companies have yet to grasp the case for change, however, and still lack both commitment and a program of action. For these institutions, gender parity will take longer to achieve.

Regardless of current viewpoints on the issue of ongoing pay inequality for women, we believe that these different perspectives will persist for some time. As a result, it is incumbent upon all of us, as members of the workforce, to keep current on the latest statistics and to become more informed and critical readers of all published material on this subject.