Rapid eLearning development (RED) programs such as Adobe Captivate and Articulate Storyline continue to be popular tools in the training and eLearning industry due to the pressures of time, cost, and globalization. In 2014, 48 percent of companies reported that they use RED programs in their workplace (Training Industry Report, 2014).

Part of the reason that RED programs help improve the content development speed is their integrated templates and characters, which serve as a great help to novice eLearning developers. However, with the templates, novice eLearning developers often start their first eLearning projects using a linear sequence—one slide follows another—with some interactive exercises to check comprehension and provide feedback. This linear content design can be effective for delivering “knowing-what” types of learning objectives to beginner-level learners.

However, frequent use of this template-based formulaic eLearning can become standard, manicured, and boring to learners, reducing effectiveness. Learners do not always prefer perfect depictions; they look for authentic, relevant, and relatable content (Clothier & Taran, 2008). Thus, despite the benefits of using RED programs, eLearning developers should also avoid the challenges associated with using RED programs, such as:

In lieu of designing page-turner type learning sequences, another content design technique that novice eLearning content developers can implement while using RED programs is scenario-based learning with simple branching structures. Integration of branching strategies may increase the attentiveness of the learner and improve the transfer of higher cognitive learning outcomes associated with problem solving, decision-making skills, or work-based practice (Andrew, 2013; Keramida, 2015). Scenario-based learning provides opportunities for learners to go through progressively more complex experiences as they make decisions, receive feedback, and experience the consequences of their decisions (Clark, 2013).

A simple branching structure design may start by presenting a scenario, story, or problem to the learner and then a question follows with answer options for a learner to choose. Each answer to the question leads the learner to a different outcome. Another scenario with a question and answer options may follow after the learners’ decision and can be dependent upon the learner’s choice (see Figures 1 and 2). In the next section, we present a sample of scenario-based eLearning content that novice eLearning developers created with a RED program. At that time, the developers had zero to six months of experience in using the RED program.

While inspired by an actual performance gap, Stop the Beeping, a scenario-based eLearning module, is designed to help improve technical support provided by the computer lab staff at Brownstone University (pseudonym).

Uninterruptible power supply systems, or UPS systems, are among the most used resources in college and university computer labs. These devices offer temporary, emergency power to protect computers from system failures and data loss when power fails. Unfortunately, power outages may also uncover issues with UPS systems themselves, which also need to be addressed. Troubleshooting and resolving UPS issues involves a basic set of procedures for computer lab staff.  Brownstone has identified a gap between the desired performance expectation and the actual performance of its computer lab staff, and developed an eLearning module to train and reinforce appropriate troubleshooting steps.

The developer of this eLearning module, a novice eLearning developer, considered a number of RED programs, and narrowed the selection to three: Adobe Captivate, Articulate Storyline, and TechSmith Camtasia. The developer evaluated these programs based on several factors, including: 1) ease of use, 2) ability to seamlessly integrate photos, illustrations, sound, and animation, 3) ability to engage learners and allow them to interact during the learning experience, 4) ability to assess learners and integrate the module into a LMS, and 5) ability to provide closed captions. Although each of the RED programs has unique features for designing content, the developer chose Articulate Storyline as it best matched the developer’s needs. Articulate Storyline’s user interface (UI) is very similar to Microsoft’s PowerPoint UI, making it very easy to navigate and learn (Figure 3). 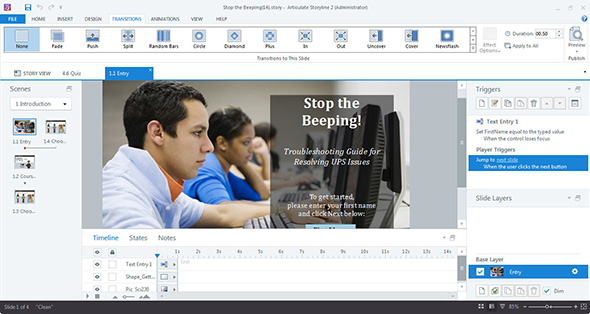 As you will see in the discussion that follows, however, Adobe Captivate offers closed captioning, a feature not included in Storyline, that would have been useful for this scenario. This is a typical trade-off that in certain cases would have favored Captivate.

Figure 4: The overall scenario-based branching structure of Stop the Beeping

The eLearning module opens with an introductory scene that captures the learner’s name. During the module, a learning agent (portrayed with a character) refers to the learner by name to provide a personalized learning experience (Clark, 2013). The introductory scene is followed by three unordered scenes—three different scenarios from which to choose. Scenario 1 is about Rhonda’s case, Scenario 2 is about Ramón’s case, and Scenario 3 is about the Lab Monitors’ case.

During each scenario, the learner is acquainted with a tech-support situation by watching and listening to the characters’ conversations and is asked to help the characters make the most appropriate tech-support decision (Figure 5). 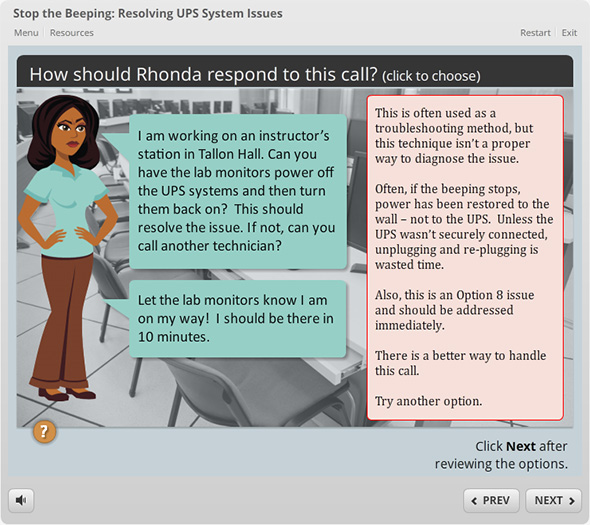 While making the decision, the learner can activate layers of reference-type content to support their understanding. Upon the learner’s decision, immediate and constructive feedback is provided. Each scenario ends with a knowledge quiz where the learner is tested and provided with immediate and meaningful feedback on his or her answers. After completing his or her first chosen scenario, the learner can either choose another scenario or end the module. The eLearning module is uploaded and accessed within Moodle, the college’s LMS. Storyline is SCORM-conformant and allowed the designer to export the module in a format that could be used by Moodle or other SCORM-conformant LMS applications.

Following Mayer and Moreno’s (2002, 2003) cognitive theory of multimedia learning, the developer created eLearning content with meaningful graphics, audio, and animation. To her, it was important to use a RED program which allowed her to: present words and corresponding pictures in close proximity; add auditory narration to explain or enhance onscreen text; and design the content in ways that minimized the chances of overloading a learner’s cognitive abilities (p. 108).

Storyline allowed the developer to incorporate all of these features, including user-activated audio and effects (Figure 6). 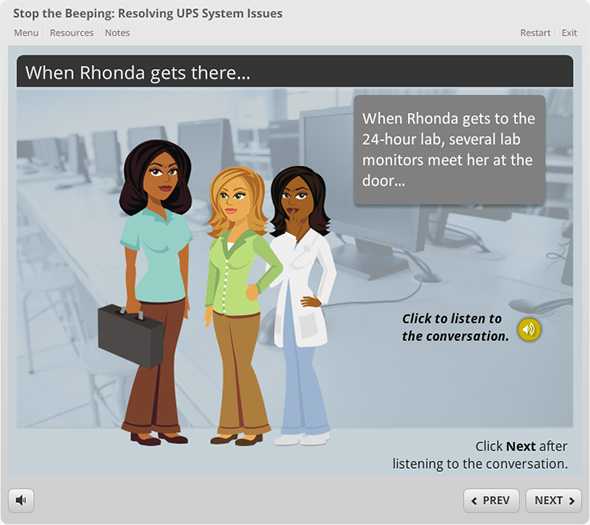 When adding audio narration, the developer also wanted the module to provide closed captions. Storyline 2 does not have a built-in closed-caption feature similar to Adobe Captivate, but a developer may accomplish this in a couple of ways, including: 1) adding a notes option for slides that include audio, or 2) creating a text box in a layer that could be activated when the learner clicks an onscreen icon.

The developer chose the first option (Figure 7), but also believes that this is an area in which Storyline 2 can improve. In fact, the developer preferred the closed-captioning feature in Adobe Captivate. 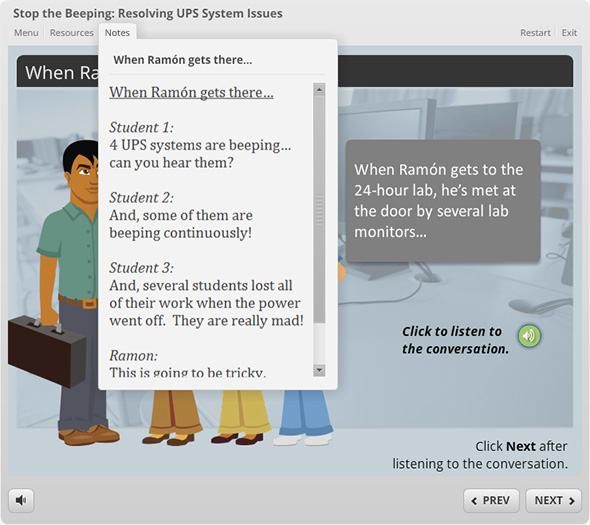 This eLearning module is available at
http://opwl.boisestate.edu/ychyung/learningsolutionsmag/sample1/story.html.

Nonetheless, we had a first-hand experience that by using a RED program, novice eLearning developers were able to think outside the “page-turner” box and successfully create their first scenario-based eLearning product with a simple branching design.

As in any other instructional design project, the overall success of rapid eLearning development lies heavily on preparing a solid storyboard before jumping onto development. Clearly lay out the sequence of conversation and feedback with a branching structure when incorporating scenario-based learning in eLearning design.