If your salary has been flat over the past few years, you have plenty of company around the world. The 2013 Global eLearning Salary & Compensation Report surveyed 4,703 eLearning Guild members worldwide, representing the period from Janu­ary 1, 2012 through December 31, 2012. The report showed trends in pay and looked at how full- and part-time employment status, country, regional areas, gender, industry, company size, number of people managed, years of eLearning experience, years of education, and job focus influenced salaries during the report period. This report is free, so you should download it!

Show me the money!

Let’s take a look at how salaries have changed over the past five years. In a word, they’ve been sluggish. In Figure 1 you see slight fluctuations in global compensation every year since 2009. Average total compensa­tion, including bonus, tuition reimbursement, and continuing education for 2013 is $81,803, rising 1.9% from 2012. 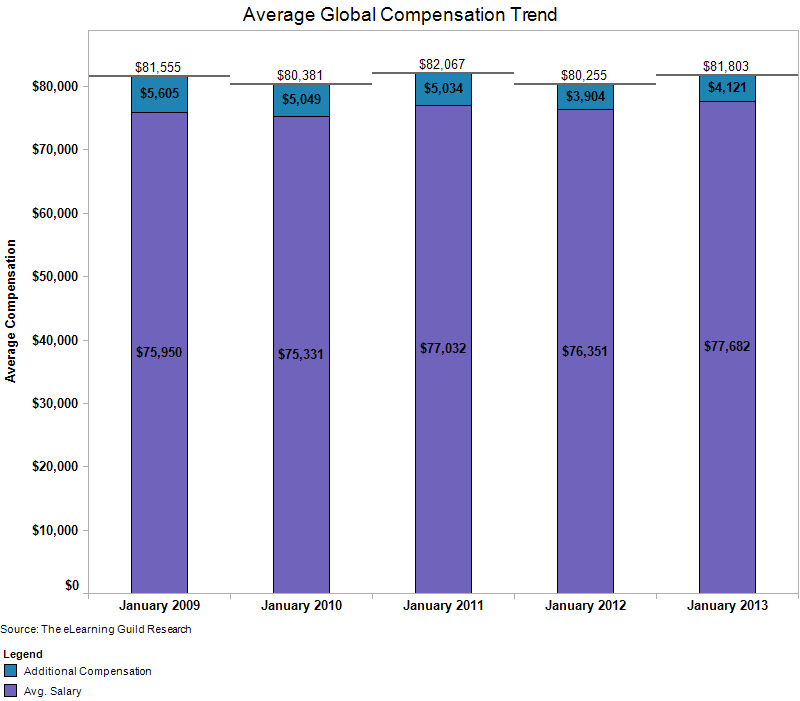 Over the past five years, while each year alternates up and down slightly, eLearning compensation has remained flat, with salaries worldwide growing by 2.2% overall and total compensation growing by 0.3% overall.

Figures 2 and 3 show the five-year trend of average respondent salaries in Australia, Canada, the United Kingdom (UK), the US, and India. All amounts reported are in US dollars so that we can compare amounts in the same currency. 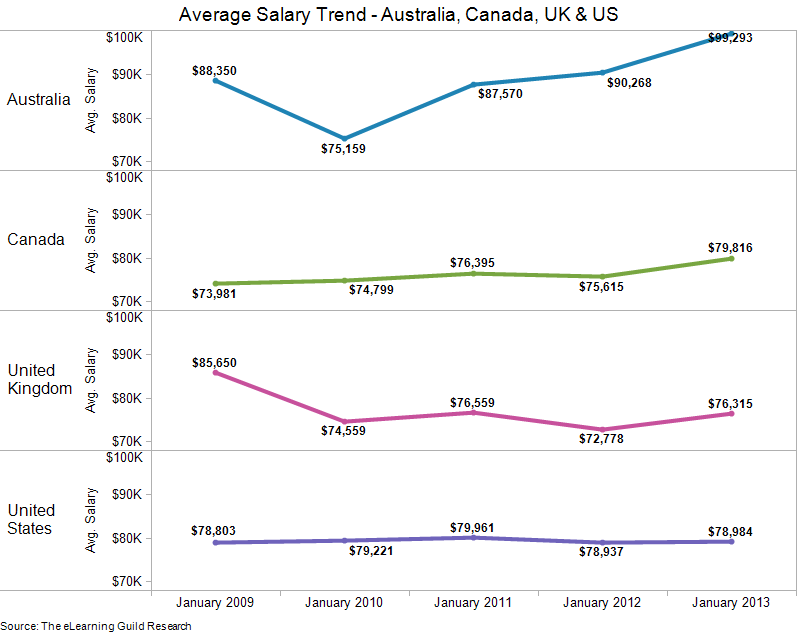 All except India experienced some increase in average salaries in 2013. Australia had a large dip in 2010, but salaries have climbed for the past three years in a row, and showed 10% growth this past year. Australia leads all countries and regions with the highest average salary among all respondents to the survey. Over the past four years, Australia also had the highest average respondent salary growth rate, from 2009 to 2013 of 12.4%.

India experienced growth in average respondent salary from 2009 to 2011, but salaries have been declining since then. This past year the average respondent’s salary in India has decreased by 8.3%. India’s average salaries are down 3.4% over the past five years.

Had a raise lately? 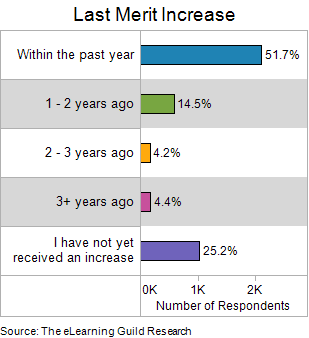 The report provides additional details about demographics and breaks out variables associated with salary, such as industry, company size, years of eLearning experience, education, and more, both globally and for the United States.

For example, Figure 5 shows that with more experience in eLearning, salaries climb. With 10 to 14 years of experience, for instance, salaries were 6.8% higher, relative to the global average salary. Figure 6 shows the same chart specifically for US respondents.

Figure 5: Salary difference vs. average global salary of $77,682 by years of experience

Figure 6: Salary difference vs. average US salary by years of eLearning experience

In order to calculate a benchmark salary for yourself or others using the report, you can use the comparison charts. We provide four scenarios at the end of the report that show you exactly how to do this. We also provide an official online version of the Guild Research Salary Calculator. You can use the calculator to compute and compare baseline salaries, but be sure to download the report to explore in detail the contexts behind the data.