Do Your Simulations Develop Conviction?

If you are not developing conviction, you may not be developing anything.

Most education programs have two goals, competence and conviction. Competence is how to do something, and conviction is why something is important. The two best go hand-in-hand, but the effectiveness of some programs, such as around ethics, sexual harassment, safety, cyber security, and leadership, absolutely require developing conviction. A health care worker who has conviction around hand washing between patients, for example, will do it when no one is watching, and will also correct a co-worker who violates the rules. They will even do it off-duty. Similarly, a manager who believes in collaborative leadership over directive will be uncomfortable if he or she is the only person talking at a meeting, or if the only feedback from subordinates is positive.

Here is a favorite technique for building conviction:

This means showing not telling. In a situation on cyber security, if the user makes a mistake and puts a thumb drive into the USB port, I avoided the directive style feedback of “Incorrect. Your actions violate Rule #164r-7.” Instead, I played out, “When you put the thumb drive into the computer, a small virus that was built into the hardware auto-loaded, which then sent some of your organization’s data to a hostile government.”

In another example, in one short sim I created around Socratic learning, if a teacher gives the right answer in response to a student question, the teacher receives the praise from the student that they "know everything."

But soon the teacher spends all day answering trivial student questions, and doesn't have time for more strategic work. Alternatively, a teacher can instead ask some Socratic questions of the student to encourage the student to answer their own question. (Figure 1) The teacher loses the short term praise but gain more independent and competent students. 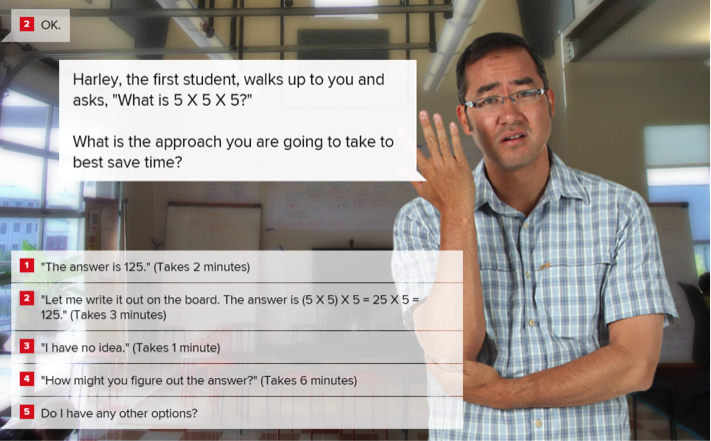 The most important design step, of course, is to be honest. Conviction can’t be created in a way that does not align with the real world. Famed lawyer Gerry Spence wrote that a critical step in winning an argument is to be on the right side. Similarly, one can only develop convictions in something that is real, if not immediately apparent.

The combination of competence and conviction creates comfort. I wrote in an earlier piece that one way of measuring conviction is ‘speed to answer’. Comfort is the ease that traditionally has come with real experience, especially experimentation. Comfort can be around using a new online tool, selling a new product or service in a new way and in a new environment, or leadership or project management. The ability of sims to create comfort is unique and invaluable.

So far, at least in my experience, conviction building seems to be greatly facilitated by building out from users’ actions, not in from expert’s words. This strongly encourages sims. And once an organization begins developing simulations for conviction building, they understand why their old ways failed.