Making Letters and Words Move: Video Titles in After Effects

This is a quick exercise using Adobe® After Effects® to create movement in the words of a video title. This exercise should take about half an hour to complete, even if you’re not familiar with After Effects. You can also create much the same effect in any number of other pixel-manipulating programs that use the fourth dimension of time.

An effective, simple, and time saving method for getting people to remember words on a screen is to make the words move. They don’t have to move much, just grow or spread apart, which you do by increasing the kerning, that is, the space between the letters. You can also create movement by rotating letters, etc. Moving words are easier to remember because they are animated. Humans tend to remember movement.

For this quick exercise, you’ll need After Effects or your favorite editing program, such as Adobe® Premiere® Elements, Adobe® Premiere® Pro, Sony® Vegas™, or Apple® Final Cut® or Final Cut Pro®. They all work the same, although some of the details in each program might be different.

After Effects is available for both the Mac and PC and matches from one platform to the other. You can get a 30-day, fully functioning demo version from the Adobe Web site. So open After Effects – and away we go. 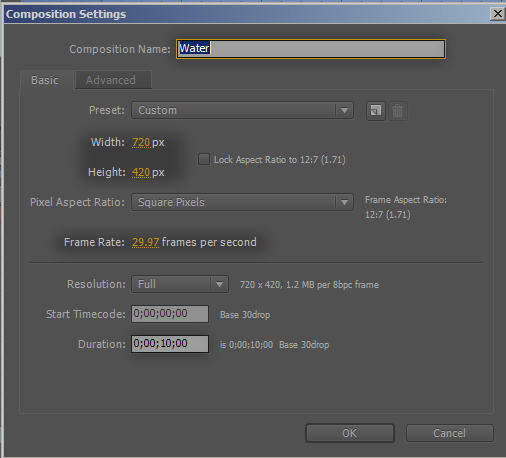 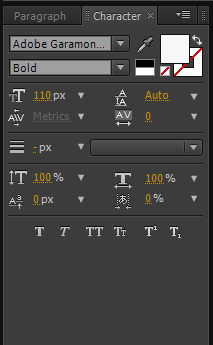 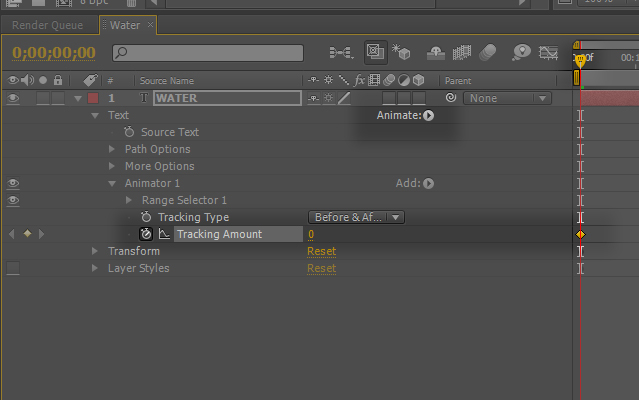 Figure 5: Setting up the animation.

We’re essentially done, but I couldn’t use this for anything the way it is, so I want to add a few things before we leave the editing session.

Now there are just a couple of touch ups left to do. First, the word looks flat and it just sort of floats over the background video image. To fix this, highlight the part of the timeline that has the letters. Then right click and select layer styles. You’ll see Bevel and Emboss as one of the options. Select that. In the finished example, I left this on the default settings, but it can be fun to play with the settings by twirling down the bevel and emboss option.

Also, I want the word to be more a part of the background, so I’ll go back, right click on the text part again (in the timeline, not up in the project window) and select Blending Mode, and then Overlay. You can try any of the modes you want and experiment. Then I set the Fill Opacity to about 40% and now the letters are part of the droplet.

And finally, I’ll make one last enhancement. Since this movie loops, I wanted the letters to fade in at the beginning and out at the end. It’s very easy to set this up. With the timeline marker set at the zero point, click the twirly next to Transform under the word. Click on the stopwatch next to Opacity and set it to zero. Then move the timeline cursor to about one second and change the Opacity to 100. Then move the timeline cursor to the nine-second mark (it doesn’t have to be exact) and notice that to the left of the stopwatch there’s a left-facing arrow, a little dot and a right facing arrow. These marks move or add different keyframes. Click on the little dot and you’ll see another yellow diamond shaped marker appear where the cursor is on the timeline. You’ve just created another keyframe marker at that point. Move the timeline cursor to the end and change the Opacity to zero and you’re done!

Publishing the finished movie and title

If you want this to be Web ready, just click on File → Export → Adobe Flash Player (swf) and it will export directly into that format. Alternatively, you can drop it in a bigger project or export it as an xfl file directly to Flash.

There you have it. This article took way longer to write than it did to create the title. Once you’ve done this kind of thing two or three times, you can knock a simple animated title out in about 10 to 15 minutes.