In a recent #lrnchat conversation, we were talking about overcoming myths and misconceptions in L&D. At one point I said: “Counterpunch, don’t just offer more data.” What did I mean? Well…

“Social media is for younger people.”

Sadly, we’ve lost my first celebrity follower, but who remembers when British nursing home resident @Ivybean104 had her 105th birthday and reminded us all on Twitter to be careful choosing your Twitter handle, because she didn’t want to change hers to @IvyBean105? She interacted with people around the world, making real connections with others, talking about sports and job interviews and weddings (see Figure 1 for examples). 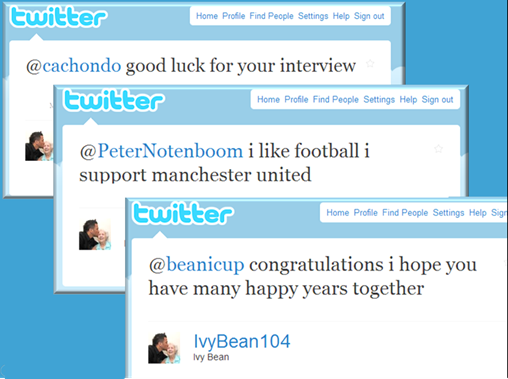 Figure 1: Ivy Bean, age 104, engaged with followers all over the world on a variety of topics

Her status as World’s Oldest Twitterer got her an invitation to 10 Downing Street, where she met then­–Prime Minister Gordon Brown (Figure 2). 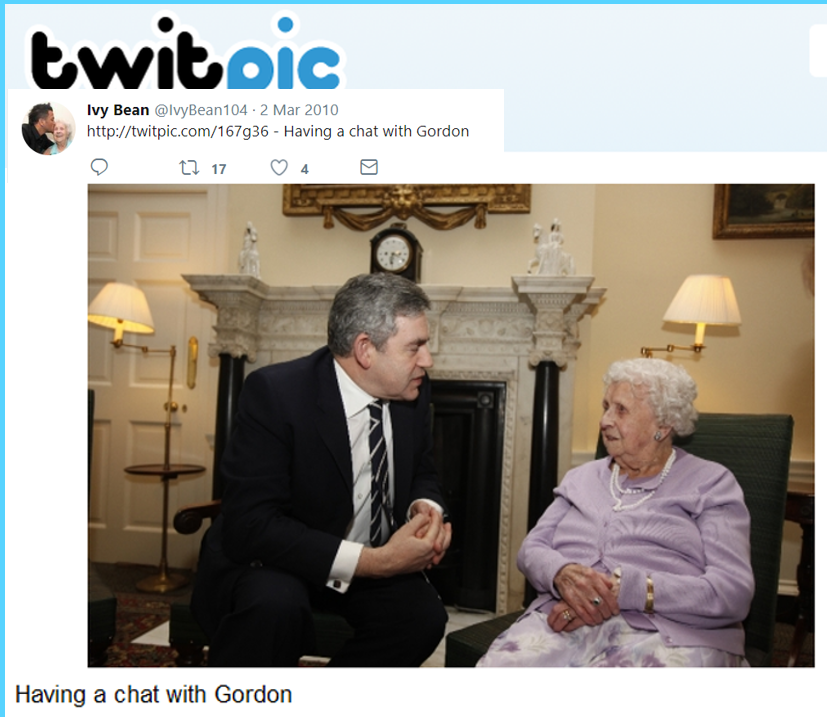 She enjoyed playing Connect Four with her friend Mabel, much to my and everyone else’s delight (Figure 3). 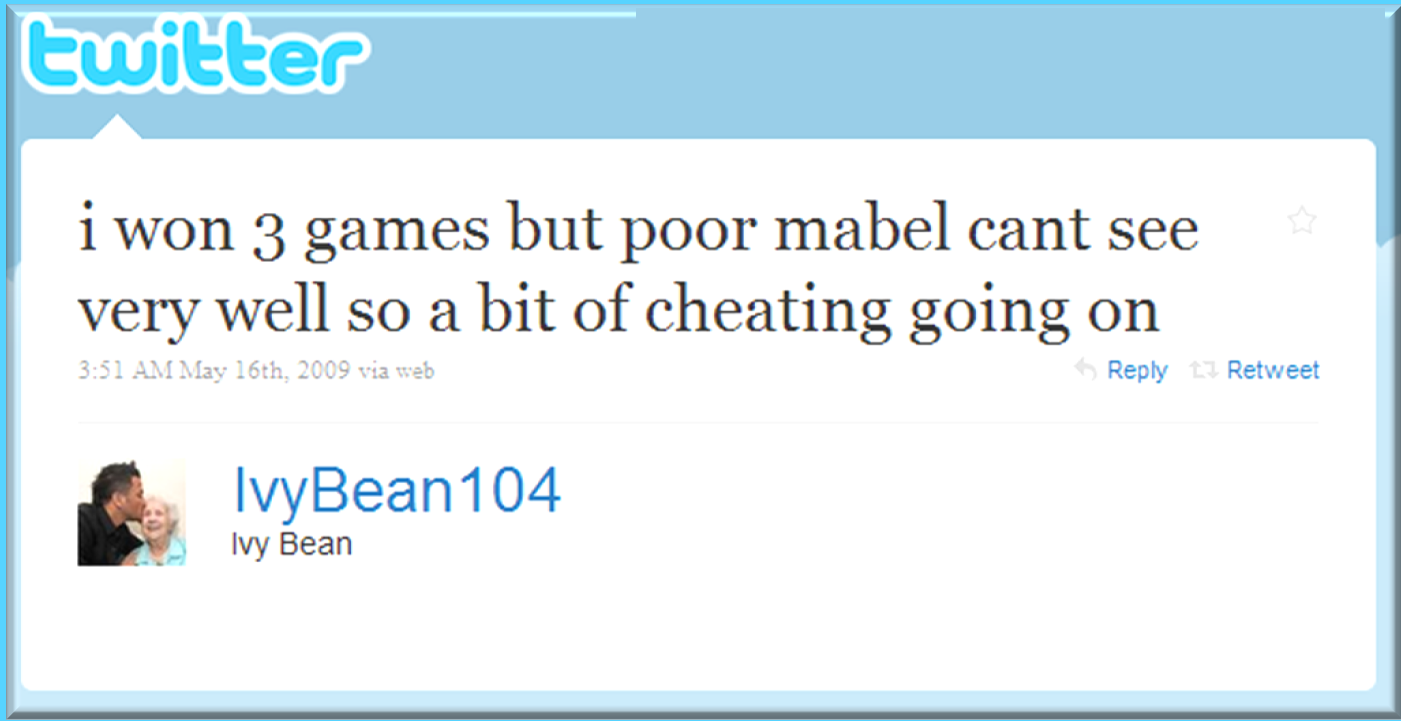 Ivy Bean just sparkled and taught us all how great good online interactions could be. The week she died, we celebrated #FishAndChipsFriday in honor of her favorite meal. I still miss her.

Then there’s Ken Wheeler, author Steve’s dad, who updates his Facebook page “blog” every day to regale us all with stories from his time in the RAF post-WWII, his working class upbringing with 10 siblings, and his remarkable memories of events like the Queen’s Coronation. He loves and keeps track of the number of followers he has and which posts get the most likes, and he sends the sweetest, kindest private messages. Best of all, he just loves technology without fearing it:

“…Jacky’s phone rang and it was the honeymoon pair in Cyprus, and they were on the phone we could see them and they could see us, now I know this sort of thing to this generation is quite normal, but to me and my generation this is remarkable, it’s Buck Rogers stuff, like we used to see in the cinema when I was a wee lad; mind blowing to me.”

I keep Ivy and Mr. Wheeler handy for conversations about how “older people won’t use technology.”

“We can’t do any interesting eLearning until my organization buys (insert name of authoring tool here).”

While I do wish you the best that the authoring tool world has to offer, there’s no excuse to wait. Good eLearning depends more on creative, thoughtful design. See, for instance, NuggetHead Studioz’s Kevin Thorn’s Mission: Turfgrass, built entirely in PowerPoint (Figure 4). 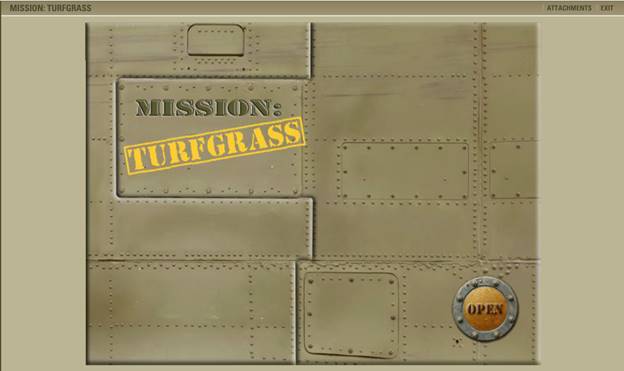 Sure, the counterpunches may focus on outliers, but they can be more powerful than trying to argue with more statistics. I remember a “games” presenter at a tech conference—a known expert in the field, who is plenty fluent with the research—who countered a “but women don’t like games” argument with, “Can I get a show of hands from the women in the room who are gamers?” At least half the hands went up. So look for the counterpunches that may be right in front of you. They’re always out there—but absent an audience of volunteers, sometimes finding them is admittedly the tricky part. Finding good curators helps (I depend a lot on Jane Hart, Helen Blunden, and David Kelly). Learning to search for the opposite-case, the positive-use, and the success stories can help. Get in the habit, when you hear a misconception, to make a point of taking a quick look for answers. For instance:

“Smartphones have no place in a classroom.” For every sky-is-falling warning, you can find examples of instructors leveraging smartphones as classroom computers. (Bonus, for those in K-16: The parents are paying for them.)
“I work in healthcare, so we can’t use any social media.” Tell that to the Mayo Clinic. Or the doctors who tweet from surgery.

Then look at what makes the outliers successful. They see the benefits outweighing the risks. They see risks as things that can be managed. They begin with the end in mind. They see a solution: For Ken Wheeler, an easy way to capture his stories and share them with the world. For teachers using smartphones, a way to leverage tools the kids actually want to use. They’re willing to make mistakes. They learn from those mistakes. Many are positive deviants. As with most things, the counterpunch is finding someone or several someones who’ve made a conscious decision to make something work.