It’s a glorious thing. The joy and excitement of starting a new job, project, or incorporating something new into our lives. It’s the unknown, the life adventure that gives us direction and purpose. Not all of us like these kinds of life adventures, but an Entrepreneur magazine survey has found that 63 percent of “20-somethings” want to start a business, and other surveys have found that at least 35 percent of employees consider learning to be a prime reason for staying with an employer.

What is fascinating about knowledge, and learning, is that it is massively expansive and intricately interconnected. One idea always relates to another idea. It is the ultimate puzzle. And, as a condition of survival, people are naturally motivated to learn and grow because, in the end, our lives and lifestyles depend upon it. The problem is that organizational cultures and technology work against this innate motivation. Here’s why.

The roots of the Great Big Beautiful Puzzle

Our amazingly powerful learning engine, the human brain, is not well understood. No, not only the neurological mechanism of the brain, but the powerful organizational principle of the mind. When our DNA, the chemical building blocks that determine the physical and functional characteristics of each species, reached the end of its capacity to advance intelligent life, Nature conjured up the brain.

The human brain, in fact all brains, allow us to remember. It is memory that allows us to store lessons-learned knowledge beyond the predefined limitations of DNA. It is to our brain’s capacity to remember that we owe thanks for the knowledge that has been passed down from one generation to the next. Memory, and the knowledge it stores, is the ultimate gift.

The astrophysicist Carl Sagan defines this principle of brains and memory in his book The Dragons of Eden, which he later explained in “The Persistence of Memory,” episode 11 of the 1980 TV miniseries Cosmos.

The insights from Sagan’s work were further defined by my mentor, Dr. Richard L. Ballard. In 1976, while Ballard was at the University of California–Irvine, he was cited for the first application of artificial intelligence to conceptual learning (Expert Systems in Business) by the National Science Foundation. Later, Ballard developed the principles of “theory-based semantics,” which is at the heart of the Great Big Beautiful Puzzle.

As an experimental physicist, Ballard’s work demanded a practical outcome. Part of that effort was to redefine and transfer the abstract study of “knowledge” from the philosophers over to practitioners, educators, and technologists. The reason for this is that Ballard considered the understanding and application of knowledge to be an empirical science rather than a speculative study. Based on his theory-based semantic principles, Ballard then developed two knowledge-computing technologies to prove his theories. They were called Mark 1 and Mark 2. These technologies were successfully developed and implemented through as many as 50 projects of national importance with the US DoD, DARPA, NASA, DEA, and NIH.

We generally think of a puzzle as being a flat three-dimensional object composed of hundreds of interconnecting pieces. Practical knowledge takes the puzzle principle many steps beyond. The knowledge puzzle is n-dimensional. It includes a fourth dimension of time, as well as primitive knowledge domains, and a host of variables such as concept associations, dependencies, and contingencies that are derived from sensory input, interpersonal exchanges, and millennia of lessons-learned knowledge.

Ballard considered every concept in our brain as being defined, in part, by one of three time states: (1) time occurrence (occurring within less than five seconds); (2) time continuant (occurring longer than five seconds); and (3) time universal (unbound by time). These elements of time help to define our sense of consciousness, our reality within the Great Big Beautiful Puzzle, by providing a minimal orientation of how we fit into the puzzle.

In addition to each concept’s time signature, our conceptual ideas also fall into three primitive knowledge domains. These include: (1) metaphysical, occurring only in the mind; (2) semiotic, expressions that represent or refer to other concepts or elements of the physical world, and a host of situations and circumstances; and (3) physical, representing the measurable “see, touch, and feel” world around us (Figure 1). 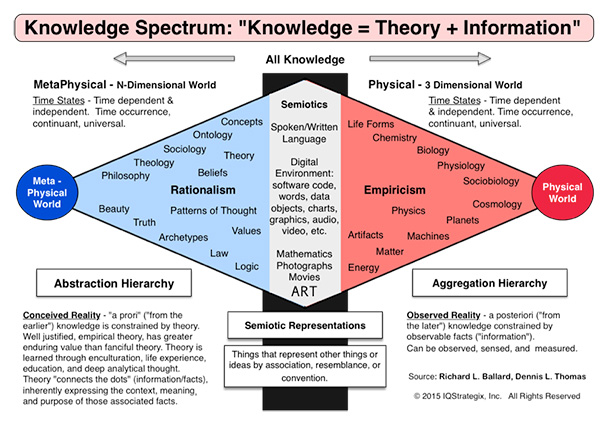 Beyond the orientation of time and knowledge domains, theory-based semantics also states that the binding element of human thought is theory. There is abstract theory (think Albert Einstein) and applied theory—the everyday, practical, lessons-learned theory that people across the globe rely upon to negotiate life’s many challenges. Applied theory is all about the “how-to,” “why,” and “what-if” knowledge that allows us to contribute value, and it’s how we work with others to accomplish great things. Applied theory is the binding element of every practical, lessons-learned concept stored in our brain’s memory.

Theory is powerful; it connects the dots. Theory, along with data and information, provides every idea in our brain with context, meaning, and purpose. This also includes the concepts and ideas that lie at the core of every organization. Einstein said, “Whether you can observe a thing or not depends on the theory which you use. It is the theory which decides what can be observed.”

What is important about lessons-learned theory, gained through life experience, enculturation, education, and deep analytic thought, is that the applied theory we learn is considered a priori knowledge—it knows in advance. This means that once we gain practical lessons-learned theory about a situation or circumstance, our brains automatically know how to apply that same theory to similar situations or circumstances as they arise.

As an example, if you did not have a priori knowledge in your brain’s memory related to opening an office door, you would just stand in front of the door until you figured out that you needed to turn a door knob, or push down on a lever, then pull the door out, or push the door in, before it would open. Once you learn the theory of opening a door, it does not matter if the door is made of wood, glass, or stone; the a priori knowledge in your brain knows in advance how to open the door. This is true of all a priori knowledge: It endures and serves us for a lifetime. It is estimated that theory represents about 85 percent of knowledge. 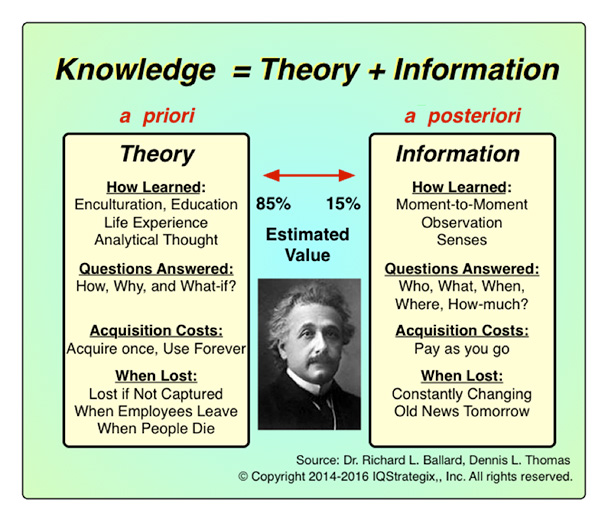 Thinking through and across the Great Big Beautiful Puzzle

The puzzle is not just about theory, facts, time signatures, and primitive knowledge domains; it is also about how we think, rationally.

The applied theory in our brains today, such as our social values and protocols, has been passed down from one generation to the next, beginning with our oldest ancestors. Likewise, most of the applied theory that underlies organizations of every kind was also conceived and developed over decades, centuries, and millennia. The principle of “buy low, sell high” is a prime example. Applied theory endures because it works. Organizational models may change, but the rational patterns of thought that make those models work endure throughout most cultures.

Rational thought, or patterns of thought, such as lists, arrays, compositions, taxonomies, sequences, and analytic models such as comparisons and correlations are all based on time-tested a priori knowledge.

Each of these rational models represents a pattern of thought that can be reliably applied to an endless array of possibilities. They are what should be taught to students and employees, because once initiates begin to see these patterns of thought manifest within each knowledge expression, they experience the true power of knowledge. That is, they become armed with the conceptual tools they need to look deeper into new and existing situations and circumstances. It allows them to more effectively evaluate each situation and circumstance’s completeness, validity, and value. Their skills of observation sharpen. Their critical thinking skills evolve. They gain sapient authority—i.e., the most knowledgeable person in the room who “knows,” who can assess and solve problems, who can make decisions on matters where there are no right answers, only trade-offs.

Why not go to the source? Once initiates learn how people think, they themselves learn how to think; and, as they do, their efficiency, performance, and job satisfaction all increase—exponentially. Their depth of understanding increases, as does their value to their associates, to their organization, and to society.

Measured against the standards of theory-based semantics, conventional eLearning technologies fail to deliver the full measure of direct experience that students and knowledge workers need and want most.

Technologies that are based on the theory-based semantics approach allow non-programming professionals to easily model the complexity of organizational knowledge simply by applying the same principles that those technologies rely on. These advanced systems demonstrate that as organizational knowledge faithfully represents common patterns of thought, they directly communicate and transfer to users both the broad perspective, and the detailed depth, of any real-world knowledge domain.

“Knowledge = theory + information” presents an empirical knowledge science that can be tested and proven by anyone. When consciously applied, this knowledge science can significantly impact on-the-job efficiency and performance, and over a lifetime, it can provide the foundation for continuing, lifelong learning.