Last month, I gave an overview of Articulate’s new 360 Suite, which includes both updated existing tools and new tools. I then went into depth on the updated Storyline 360 and discussed Articulate Review. This month, I’ll cover the other tools you see in Figure 1. Again, the suite features four desktop tools, including the Storyline update; four web-based tools, including Articulate Review; and one iPad app called Preso.

Studio 360 includes Articulate Presenter, Engage, and QuizMaker. It is the update to Articulate Studio ’13.

It can be argued that this PowerPoint add-in is how Articulate first made its mark in the learning tools market. First offered in 2002, it has continued to be a popular tool for eLearning developers. As a PowerPoint add-in, it provides a ribbon of options that you use to enhance your PowerPoint files. See Figure 2.

In 360, Presenter has improved in the same areas as Storyline 360: 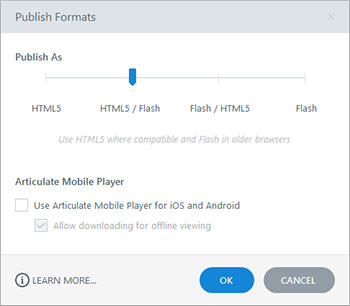 In addition, a few other improvements have been made to Presenter. 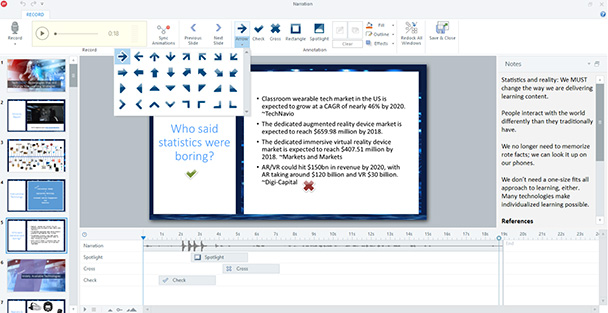 Replay has not changed much. Articulate did add a few useful editing options, as seen in Figure 5. As before, you can mix video of yourself from a webcam and a screen recording, then edit, mix and match with additional audio, images, videos, and lower thirds. One feature I see lacking here is the ability to brand or customize the resulting video skin in any way. That’s not a problem for some folks, but it’s a show-stopper for others. You also cannot change the background behind you in Replay, even if you use a green screen.

Peek is also a screen-recording application, available for both Mac and Windows, that creates (noninteractive) video demos. Think of it as a light version of Replay. It doesn’t record from your video camera, just screen actions. If you choose to have Peek launch on startup, it will always be available in your system tray. Whenever you click it, the dialog seen in Figure 6 will appear, in which you’ll see a snapshot of the last recording performed and the time when that recording occurred. Click the New Recording button, much in the same way that TechSmith SnagIt works, and you’ll see a snapshot of all open applications and screens. Note in Figure 7 that I have three screens and it shows I’m able to choose any of them for full-screen recording. If you open any other applications while this dialog is up, the dialog will show those too. 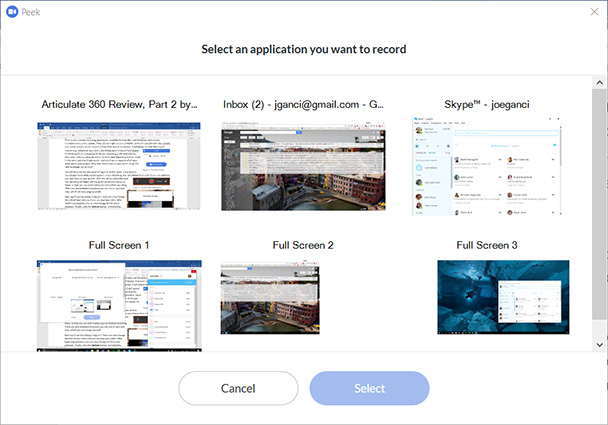 You will then see the thin panel in Figure 8. At this point, if you wish to record your voice while capturing your screen recording, you can choose from a list of any microphones you may have on your system. Click the red “record” button; the recording will begin and the word Cancel will change to Done, so that you can click it when you’ve finished recording. There are also keyboard shortcuts you can use to start and stop, which you can assign yourself.

Next you’ll see the dialog in Figure 9. Here, you can now change the title of your video and play your video. After beginning playback, you can also change to full-screen playback. Finally, click the Upload button. Immediately, you’ll be able to access your screen recording, share it with reviewers, and save it as an MP4 file on your local drive. 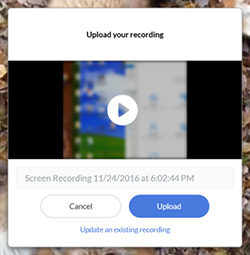 A new addition to Articulate’s cloud-based tools, Rise is nothing like the other tools in the suite. It’s made to be simple, which means it’s not as powerful as Storyline, but it’s more powerful than Studio.

The first step in setting up a Rise project includes:

You can always return to change the above by clicking Settings.

Next, you create your course structure. Note you don’t have to do this all at once. You can add lessons as you go.

Each lesson can comprise a series of activities, as seen in Figure 10. You can’t mix and match these on one screen as you would in Storyline (or Presenter). Rather, the learner will move from one activity to the next. Activities include (Figure 10): 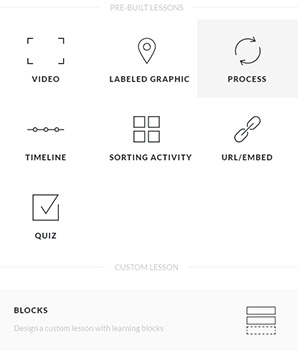 Rise lends itself more to responsive design. Whereas neither Storyline 360 nor Rise allows you to customize each view individually (desktop, tablet, and mobile; portrait and landscape), the nature of Storyline is to design a screen where the learner normally doesn’t have to scroll up and down, nor left and right. When shown in a portrait mode, Storyline leaves gaps at the top and bottom so as not to change the aspect ratio of the content. Rise, on the other hand, functions like a responsive website because we usually don’t mind scrolling up and down on websites. Therefore, it has more freedom to make each view fuller, with no large gaps. In short, the way you build learning in Rise makes it easier to present itself as responsive. Rise automatically detects screen sizes and flows the content accordingly. Therefore, there’s little need to customize each view. The tradeoff is that you are using a preset approach.

See Figure 13 for an example of each.

Figure 13: On the left, how a Storyline slide looks in portrait mode on a mobile device; on the right, how Rise looks in both portrait and landscape views

A word of warning: If you make a mistake in typing a URL for a website or choose the wrong image to show, in most cases you cannot simply edit the URL or swap the image. You must delete the link or the photo and try again. This can be annoying, so take care to enter the correct information the first time. On the other hand, if the URL you typed doesn’t exist, you are told so and allowed to try again. 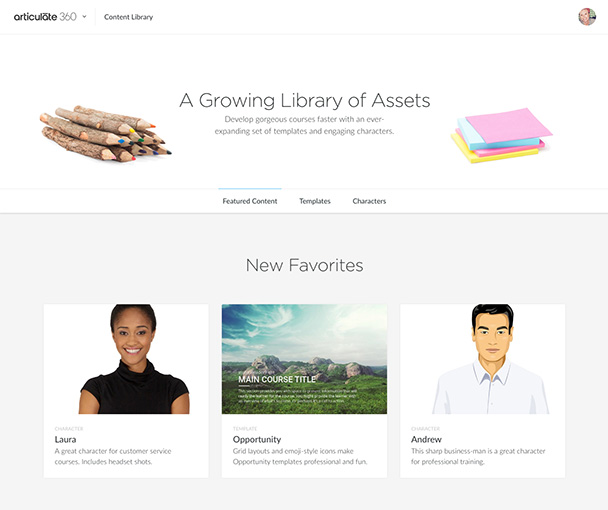 This site lets you choose from upcoming free live training events, each about an hour in length. There doesn’t appear to be a way of accessing recordings of past events except by those who attended the original events.

Preso is a new app that runs on iPads. It allows you to create training presentations by combining text and images and drawing on the screen. You can also import from any PDF file, though this makes most sense if the PDF file was generated from a slide-based application like PowerPoint. You may also record audio on each slide. See Figure 15. 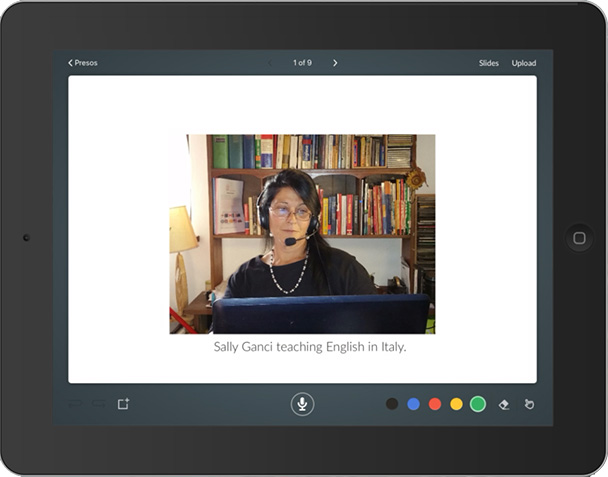 Preso is easy to use, and you can make some attractive presentations with it, but it is limited in several ways. You cannot insert videos or interactions of any kind. The colors you see on the bottom right are for freeform drawing on the screen, but you’re limited to the colors you see; and there is no control over line thickness or constraining lines to be straight or form a polygon, so drawing a rectangle or a circle would be difficult.

Preso does include multiple undo/redo options, which is nice. The eraser tool to the right of the color choices lets you erase a part of the slide or the whole slide. Of course, you can position and resize images on the slide. Text options include color and size, but not font choice, nor other formatting such as boldface or italics.

One odd aspect I found in Preso is that once you record audio for a slide (you can’t import audio that has already been recorded), it is basically locked down at that point. All the other options disappear, so you can’t make any changes to the slide nor add any more elements to the slide. If you do need to make changes, you must discard the audio you recorded. In other words, you shouldn’t add the audio until the slide contents are all included, sized correctly, etc. There is no Save option; everything is automatically saved.

Preso lets you reorder the slides and upload the presentation to Articulate for others to review and comment on your presentation at your invitation.

I believe Preso is a nice utility, but it needs a lot more in terms of features to truly be useful in more cases.

See my review last month for pricing and discounts.

All in all, Articulate has created a suite of updated and new products that the company hopes you will find attractive in terms of features and pricing with its new subscription model. Those who do tend to use several of the tools will benefit from a cost savings, especially because Articulate will continue to update the products with new features. Like most subscription models, however, when you no longer need the tools, you’ll no longer have access to them, including Storyline and Studio.

It may seem a bit disingenuous to include as part of the suite the ability to view the Content Library, because you can’t download from it except from inside Storyline or Studio, or to include Articulate Live as a tool when the free webinars have always been available as part of Articulate’s community outreach, though now these webinars will be held each and every week. In short, there are really only two tools in the web category, not four, but I do find it nice that Articulate has tried to position everything under one umbrella. I would suggest that, rather than just a link to upcoming webinars, they also include the link to the full Articulate community because that has always been one of Articulate’s greatest strengths.

Have you checked out Articulate 360? Are you using it? Tell us what you like and don’t like about it in the comments below.