Some observers of the corporate LMS marketplace signal a dire future for corporate LMSs. Others are even going so far as to announce that the corporate LMS, as we know it, will be “dead” in five years. However, observers of the academic LMS marketplace paint a quite different, more positive picture of the future. Many in academia and the wider marketplace are increasingly discussing an “evolution” of the academic LMS. Others are looking forward to the transformation of the LMS into what many now call the “next-generation digital learning environment” (NGDLE). NGDLEs are considered “successors” to today’s academic LMSs, and are envisioned as learning environments, or “learning ecosystems,” rather than single, enterprise-level applications.

In our report, we presented results from our recent academic LMS research study, cosponsored by Adobe Systems. Invitations to participate in the study were sent to corporate and academic members of both The eLearning Guild and Adobe Systems global user communities. We received a total of 1,299 responses from more than 35 countries worldwide. The largest number of responses came from the United States (888 responses), Canada (89 responses), Australia (40 responses), and the United Kingdom (26 responses). From this combined pool of academic and corporate respondents, we selected only those who identified themselves as representing academic institutions—either as an academic professional or an eLearning practitioner. This smaller sample of 312 academic respondents was the focus of this research report.

The goal of this research study was to focus on academic LMS usage and characteristics; LMS satisfaction and customer loyalty; and perhaps most importantly, the LMS features and functionality that our academic survey respondents said were most important to their organizations. Here is a summary of several key insights from this report.

As shown in Figure 1, more than one-half (64%) of institutions use a SaaS-based LMS, while less than one-third (27%) still deploy their LMS on premises, maintained by their own IT staff. This confirms the continued dominance of cloud-based LMSs over on-premises LMSs—in both academic and corporate deployments—for the last three to five years.(Editor’s note: Percentages shown in the figures in this article do not total to 100% in every case, since not all survey participants responded to every question.)

Nearly one-half (47%) of survey respondents were only “somewhat satisfied” with their LMS. (Figure 2) This mediocre satisfaction level is similar to what has been noted across other LMS industry studies. Sixteen percent of institutions surveyed were “very satisfied,” and 25% were “dissatisfied” or “very dissatisfied.”

We found nearly the same number of 2015 corporate and academic LMS respondents (46%) and 2013 LMS respondents (46%) were equally “satisfied” with their LMS. LMS implementation experiences substantially affect overall levels of satisfaction, in particular, the elapsed time between the LMS software installation and setup and the critical point at which institutions can begin actually enrolling students. More than one-third (37%) of institutions said it took more than three months after initial installation to begin enrolling their students. 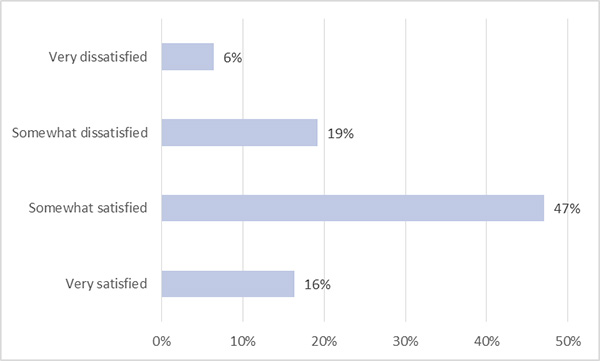 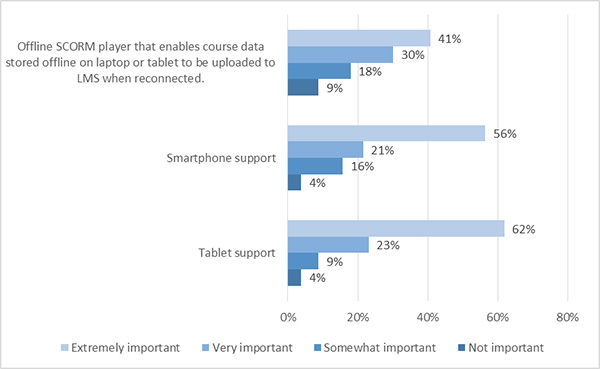 Fully 60% of academic respondents said they either “totally disagree” or “somewhat disagree” with the following statement: “Gamification is not an important feature for our next LMS.” (Figure 4) This was consistent with almost exactly the same number (59%) of 2015 corporate LMS respondents who disagreed.

When asked if gamification definitely improved the learning experience and enhanced knowledge retention, slightly more than one-half (54%) of institutions said they “somewhat agree,” while only 31% “totally agree.”

Corporate LMS respondents in 2015 did not seem as convinced about the value of gamification, and almost three-fourths (69%) said they “totally agree” or “somewhat agree” that gamification is “nice to have, but not required” in a future LMS. 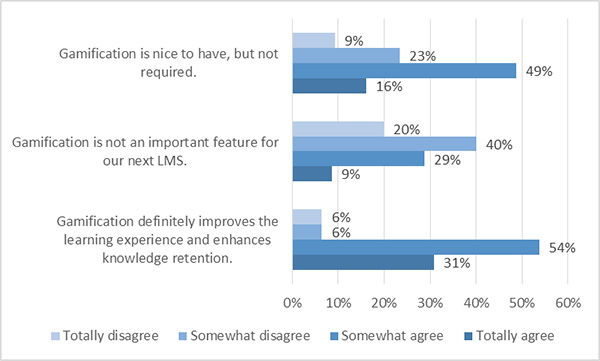 Study results confirmed the importance of designing all types of learning experiences (including the LMS user interface) from a learner’s point of view, as opposed to that of a learning and development manager or an LMS administrator.

Responding to the obvious importance of “learner-centered” designs for academic LMS users, our respondents identified what they believed to be the most important academic LMS features—from the learner’s point of view. Learner-centered designs have the following attributes. [See the research report for all source citations}: 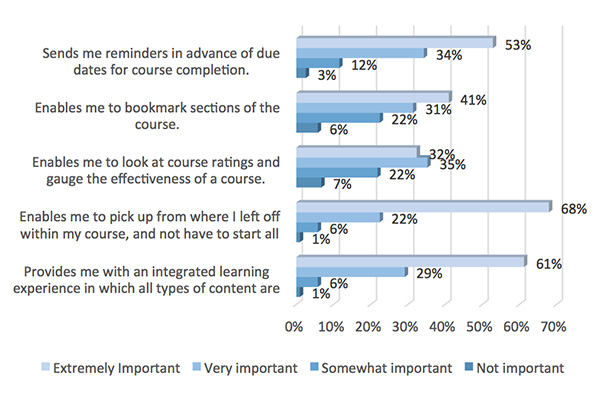 Learner-centered environments, and student-centered learning communities, have long been recognized as critical requirements for academic LMSs. Interestingly, as one academic blogger noted:

In a student-centric LMS, the core abstraction of the LMS is the student [learning] resources could be local and within the LMS, or they could be external to the LMS or to the student’s current institution ... building the LMS from this perspective [enables students to] connect to students and to resources. Instructors would just be another kind of student, ones with perhaps some special abilities (like assigning grades).

These issues are important because they focus on the need for academic students and workplace learners to have easy access to information “whenever, wherever, and however.” As an industry analyst notes, “Making it painful for the end user to access the system and to get the relevant information when they need it defeats the basic purpose of the LMS and directly impacts ROI.”

We believe that today’s academic LMSs will sustain themselves in the near future and continue to evolve into next-generation digital learning environments.

We concluded our report by stating our belief that academic LMSs will continue their “evolution” and will sustain a more positive view of the future than that currently painted by corporate LMS market analysts. As such, academic LMSs will be transformed into the “next-generation digital learning environment” (NGDLE) mentioned at the beginning of this article.

As we saw from these study results, users of academic LMSs should reevaluate their aging learning platforms and carefully investigate other leading-edge platforms and technologies. All LMS users—whether corporate or academic—need to clearly identify their learning management needs and proceed in a direction that enables them to deliver the best-possible digital learning experience. The need for clarity of purpose and preparation is more relevant now than ever before, particularly in an LMS marketplace that changes somewhat every day and more significantly every year.