xAPI Camp Toronto 2015: The Evolution of a Spec 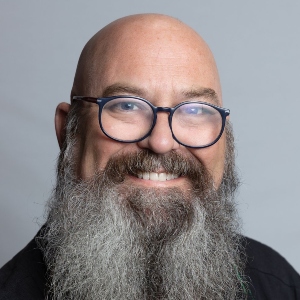 As the groundswell of excitement around the Experience API (xAPI) grows, the Connections Forum hosted their fourth xAPI camp of 2015 in conjunction with the Institute for Performance and Learning in Toronto last month.

While this, like previous xAPI Camps, highlighted creative uses of xAPI, the focus of discussions has evolved from “things we can do,” through “things we have done,” and now solidly into “interoperability and standardization.” This evolution shows that xAPI is being incorporated as an integral part of the learning ecosystem—not merely a new technology fad.

For a little background, xAPI is an open-source specification for recording learning experiences using a simple <actor><verb><object> activity stream. This data is stored in a Learning Records Store or LRS. The development effort, led by the Advanced Distributed Learning (ADL) initiative, sought a way to track experiences from multiple sources—software applications, mobile devices, enterprise systems, in situ workplace sensors, and even traditional learning technologies. Essentially any device or application with the proper credentials can write statements about a person’s activities to an LRS. The LRS can then be queried to track and report on these activities, identify trends in workplace behavior, and even provide adaptive coaching or learning opportunities for students in real-time.

After the first release of xAPI 1.0 in the spring of 2013, a number of innovative learning and human performance professionals began using the technology—often leveraging the specification to meet specific business needs that they could not easily meet before in the absence of student activity data. The xAPI Camp archives and TryxAPI websites both host a number of these case studies.

Fast forward to the end of 2015, and xAPI is the hot topic of discussion at learning trade shows and publications. Companies like Saltbox, Watershed and LearningLocker have released Learning Records Stores. Authoring tools have begun incorporating the ability to send xAPI statements, and plug-ins are available to write xAPI statements to an LRS from independent systems such as blogs, social media sites, and even YouTube. But, as with any new and particularly open standard, the focus has quickly shifted to portability. With so many independent systems writing to one LRS Database, how do we keep all this data straight and make it useful? 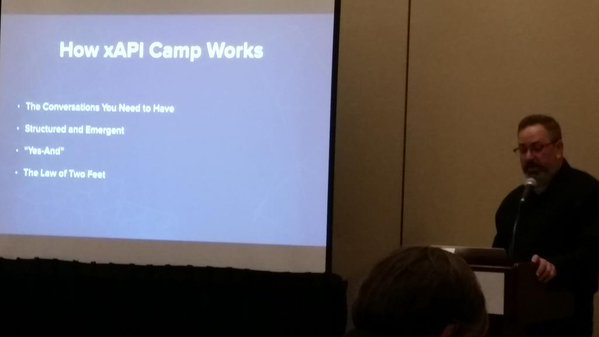 Aaron Silvers, partner in Making Better and host of the event, set the stage at the most recent xAPI Camp with a review of xAPI vocabulary and a State of the Industry update. Highlighting topics other presenters would cover in-depth, Aaron also focused on the concerted effort for standardization and building a community of xAPI-compliant products that play nicely together. The development of xAPI “Recipes” is one standardization effort where common protocols for xAPI verbs and their use can be common across an industry or use case. For example, if tracking xAPI statements about a user’s interaction with a video, it’s important that different video players record actions like “fast-forwarding” the same way. If one system uses the verb “advance” and another uses “skip” to describe the same function in an activity stream it becomes very difficult to report on these activities together. One of the things Aaron alluded to in his introduction was the future direction of the Data Interoperability Standards Consortium or DISC, a non-profit organization formed to manage certification of xAPI compliant products, handle specification maintenance, and drive communication around the standard. In 2016, watch as DISC activities ramp up with xAPI testing programs and working groups form to help standardize xAPI Recipes.

Speaking of recipes and consistency, Sean Putman, Vice President of Learning Development for Altair Engineering and owner of Itellectus Learning gave a presentation on the State of Authoring Tools during the Toronto Camp. Sean reviewed three tools; Articulate Storyline, Adobe Captivate, and Lectora by Trivantis. All three tools do provide the ability to send xAPI statements to an LRS. Sean drove home the criticality of good slide-, page-, and question-naming conventions within these authoring tools so that activity statements in the LRS are more logical. He also recommended creating additional “clicked”-state slides, to help further track where a student is within a module when he or she interacts with the content. A good bit of discussion was dedicated to using standard or canned verbs versus creating your own verbs for content interaction. Sean’s recommendation was to check with communities of practice that may have already established a vocabulary defining how different verbs can be used. Some of these issues, from an authoring tool standpoint, will be resolved with the ADL’s new cmi5 Protocol.

cmi5 is essentially a super-Recipe that creates a base protocol for how xAPI is used in a very specific scenario—the launching of content from an LMS. cmi5, first released in May 2015 as a beta, will ultimately become the replacement for SCORM built on more modern, constant, and secure technology. One goal of cmi5 is the interoperability of modules between different learning management systems just like its predecessors, SCORM and AICC. Because cmi5 uses xAPI as its communication layer, and leverages the power of an LRS in addition to an LMS, it also provides advantages like Content As A Service, the ability to record and retrieve user-created data to/from the LRS, as well as the sharing of data across multiple learning activities. Oh, and did I mention that it requires no pop-up windows like SCORM and AICC content?

To demonstrate how cmi5 works in practice, I had the opportunity to share with the Camp the launching of a cmi5 module that acts as a Statement Generator from the RISC LMS. Once open, and the LMS window closed, the statement generator could be used to send xAPI statements to an LRS and, upon meeting the passing criteria, the completion records displayed in the LMS. Other LMS providers interested in becoming cmi5-compliant can access this free cmi5 statement generator from GitHub.

Megan Torrance, President of Torrance Learning, maintained the concept of living in a post-SCORM world with her presentation on Day Hikes in xAPI suggesting to start small when venturing into xAPI. Organizations care about the correlation between improved learning and better organizational performance—no one will buy-into xAPI as a technology without seeing this linkage. Megan went on to discuss clues that can help guide an xAPI project including the context, the nature of the experience to be tracked, and who will initiate the learning activity. The theme of managing a development project continued through the Metrix Group’s Rob Christie discussing effective communicating in project teams from a developer’s point of view.

As Camp drew to a close, a number of other unique applications of xAPI were discussed. Educational Futurist Myra Travin discussed the criticality of Learning Personalization in a mobile workforce and the benefits of xAPI data to aid with personalization. Myra reminded the group never to confuse technology with strategy. Learners must remain the focus of your L&D Strategy, and technology should be leveraged where it can be to support learners. Mary Meyers, Lead Advisor for Leadership and Learning at Kingston General Hospital, discussed the potential role of xAPI in patient-centered care and employee engagement. While on the HR and employee performance track, Mark Sheppard, founding Member of Workplace Insiders, posed a question to the group, ”How can xAPI data be used to reduce the total cost of recruiting and hiring?” More specifically, “What are key indicators that can be tracked from initial screening of candidates through onboarding and their first year that correspond to retention and performance?”

After a full day of lively discussion, presentations, and breakout groups, the room was buzzing with excitement about the possibilities xAPI brings to the table and the benefits already being realized by companies working on the cutting edge of tying experience data to workplace performance and success. If you are interested in becoming part of the conversation, attend one of the three already scheduled xAPI Camps of 2016: