Unless you have been hiding behind a rock for the last few years, you have heard of iSpring Suite. If you’ve attended a Guild conference (and if you haven’t, you really should), you no doubt have seen the iSpring booth in the Expo Center. In fact, you may already be a big fan of this PowerPoint add-in eLearning development tool.

Compare the Microsoft ribbon that iSpring provided in version 7 with that in version 8 in Figure 1 below, and you can immediately see the first change, found in the Insert section, two new options: Simulation and Screen Recording. Notice also the new flatter look of the ribbon. I know a lot of people like a flatter look while I’m one of those who prefer a little color.

When you click the new Simulation option, it launches a separate app called iSpring TalkMaster, as seen in Figure 2. 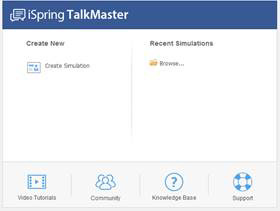 Lest you think that we’re talking software simulations here, we’re not: we are referring to creating scenario dialogs that you can deliver to any device. This is my favorite new feature in iSpring. (I’ll get to Screen Recordings after this.)

To build a simulation, you start by creating a new scene. Choose a character (in essence, the actor), and the character’s starting emotion, which will change the character’s facial expression, as you can see in Figure 3. 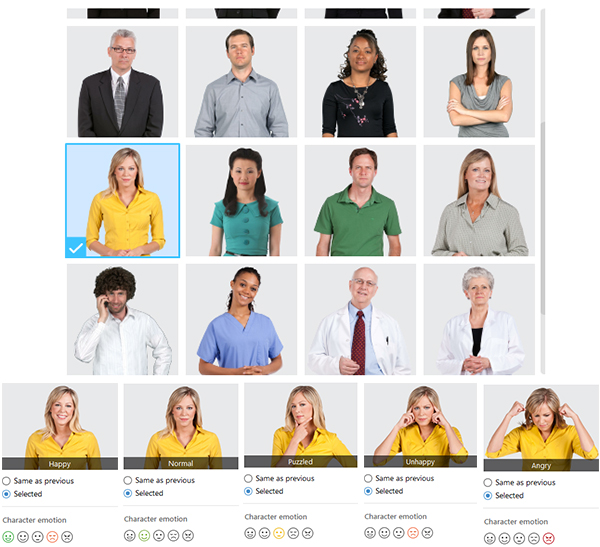 Figure 3: Choose a character and an expression

Next choose the background you wish to have, as in Figure 4. 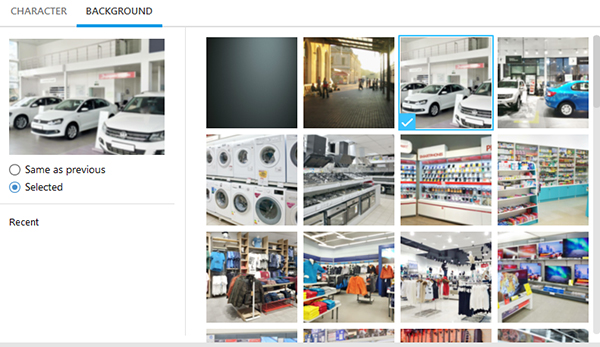 Now for each step in our simulation, you use the dialog you see in Figure 5, in which you choose what the character’s emotion is at this juncture, type what the character will say, and provide the learner with either a set of optional responses from which to choose or provide a feedback, which is meant to let the learner know whether their last response was good, bad, or ugly. I also find it useful to provide an immediate response to the character (such as I have done in Figure 6). 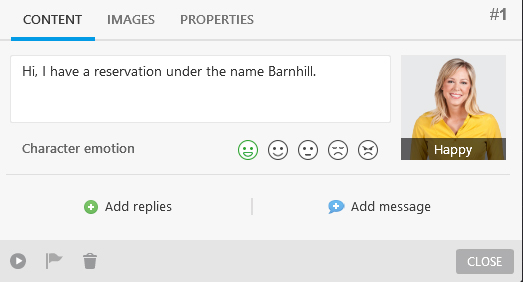 In Figure 6, which represents the first scene (hence the #1 in the top right corner), we have provided an immediate feedback. Notice you can add an image to the feedback as well. The Images tab lets you change the character and/or the background images in this scene while the Properties tab lets you change the scene color and scene score (in the case of giving the learner responses from which to choose). 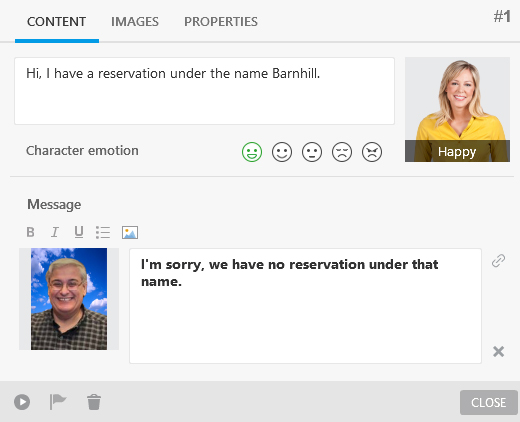 button to see the scene as a starting point, or delete the scene. In Figure 7 below, you can see the preview of our dialog above. Notice the gauge at the top right that shows the character’s emotion. 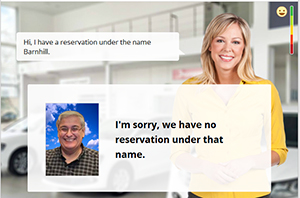 Figure 7: Preview of the scenario scene

Closing the scene will show a collapsed screen, as you see in Figure 8.

. Clicking and dragging that out to an open area will automatically create a new scene based on the one you have currently selected. See Figure 9.

The new scene will open and you can make changes to that scene just as you did to the first. You can also create scenes separately and then tie them together with the link icons rather than creating each scene from a scene just completed. In Figure 10 you can see how in Scene 2 I have allowed the learner to choose from three responses that can be used with the hotel guest. Each goes to a different scene. From there, I can continue to build the branching scenes as much as I want, including bringing the learner back to a previous scene, such as you see Scene 3 branching back to the starting scene.

There’s more to TalkMaster, but I believe I’ve made a convincing case for its usefulness, so let’s move on to the next new feature.

Yes, you can now create screen recordings in iSpring. When clicking this option in the ribbon, it opens a new app called iSpring ScreenRecorder. When you create a recording, you get a rectangle, such as seen in Figure 11, which you can resize and position wherever you wish. When you are ready to record, you click the

button. You can also record your own voice by turning the microphone on 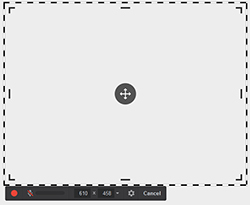 The end result can be saved as a true movie, meaning that’s it’s capturing the whole time it’s recording rather than only when you click on items, as is true of the default options in other screen recording tools. This gives you a faithful rendering of what was happening during the recording, at the cost of a larger file.

After capturing the video, you’ll see the dialog in Figure 12, which gives you options to edit the video, save it, or upload it to YouTube. 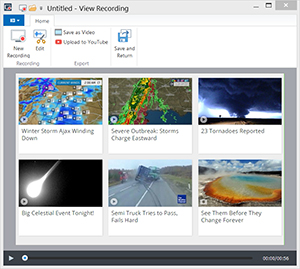 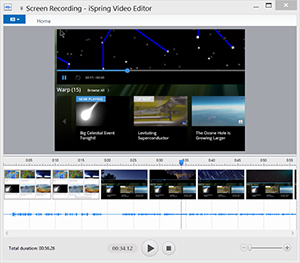 The Screen Recording and Video Editor tools are very straightforward and will serve you well as long as you don’t need more features, such as those you find in products like TechSmith Camtasia or Adobe Captivate. Very often, all you need is a nice screen recording with no extra bells or whistles, and this fits the bill nicely.

What else is new?

Here are some of my other favorite new features in iSpring 8:

You can see the full list of new features here. Download the trial and see if it meets your needs. iSpring has improved tremendously since its early days and you may find it not only easy to use, but, for a PowerPoint add-in tool, it is pretty powerful too.

By the way, iSpring will be releasing TalkMaster and ScreenRecorder as standalone products before year’s end as well.