Sometimes, in all the talk about interactivity and specific interactions in eLearning, we can overlook the bigger problem of creating an engaging overall package for our programs. Your bigger approach—a good treatment for your work—is often what moves a program from ePresentation to eLearning.

Bullet-ridden, content-based programs rarely get past the cognitive domain and are usually a long way from doing much to influence workplace performance. Getting the treatment right isn’t about technology, money, or skill with any tool. No authoring tool will magically create relevant, engaging learning experiences on its own—and making it pretty doesn’t make it more effective. Crafting a good treatment is a great chance to apply your creativity and is often the thing seasoned designers like best about their work.

I’ve spent my whole career in state government service, a vast, sweeping land of compliance and policy training. The content is terribly dry, with source material written in legalese and bureaucratese, often abstracted from context. Finding an interesting approach that will help learners learn is admittedly daunting, but I find it challenging, rewarding, and fun (don’t tell). Other designers say the same. As much no-fun as it is to sit through screen after bulleted screen? It’s just as much no-fun for people who build those. Here are a couple of examples of treatments for dry content.

The first, from Kevin Thorn of Nuggethead Studioz (www.nuggethead.net), arose from a client request to develop training on HIV awareness and the future of living with HIV. Thorn went with a series of scenarios wrapped inside a graphic novel framework (Figure 1). 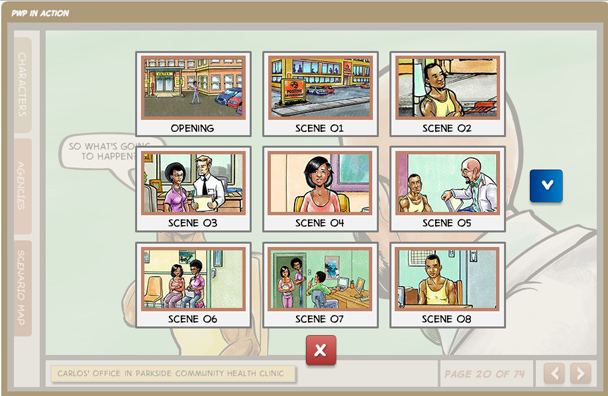 The second example (Figure 2) is from Trina Rimmer of Rimmer Creative Group (http://trinarimmer.com/), on the subject of … laundry, featuring protagonist Biff: 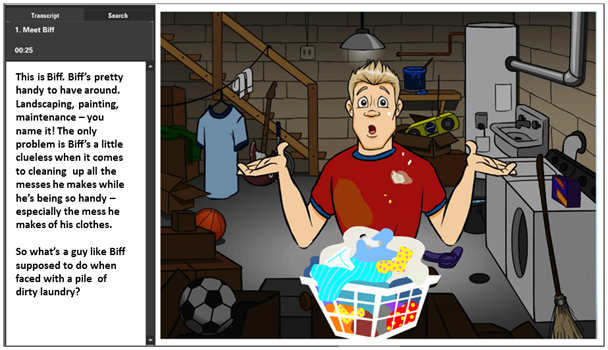 There is nothing terribly technically sophisticated or expensive about these examples; given good resources for art, you could easily build both in any tool, including PowerPoint. The products come from good designers sitting down and figuring out an approach that is more than just straightforward presentation of content.

For starters: Put your hands in the air and step away from the computer.

As I talked about in July’s column, the temptation to move into development before establishing a good design often brings us bad end products. Think about what would make the content relevant and useful to learners. Think about real workplace application: a problem a worker might encounter, a difficult conversation that needs to be had, a decision she’ll have to make, or a mistake that could get him fired.

One thing you’ll notice about most interesting treatments: They usually include some narrative elements. There’s a storyline like a hero on a quest, or a puzzled character figuring out a solution, or, ahem, an angry bird targeting some bad green pigs.

So talk to the people who have the stories, like end users and customers and SMEs. Listen for key repeated words, like “puzzle” or “jungle” or “maze” or “bottleneck,” that conjure up possibilities for visuals.

Try free-writing: Take a blank sheet of paper and set a timer for three minutes. Start writing, and keep writing, about the topic until the time is up. Look your work over for themes or metaphors, as you may find ideas for a treatment there. Sometimes it’s helpful to talk to people who have no connection to the content at all: Their perception of “ladder safety” could give you the little jolt you need.

So don’t blame your content. It’s your JOB to figure out how to make it interesting and engaging, and it’s what can help keep you interested and energized in your work. Some more advice: Go Google your topic and see what others have done with it. There are 7,494,643 online “sexual harassment” courses. Three of them are good. If those three designers could figure out a better approach, you can, too.

I wrote about this in Better Than Bullet Points: Creating Engaging eLearning with PowerPoint, now available in its second edition (Wiley, 2013). Some material here has been adapted from it.