Lectora from Trivantis is not a newcomer to the eLearning development tool market. In fact, it’s been around since 1999. However, the latest version, version 11 (actually 11.1 as of last week), has been overhauled from the ground up, so much so that it feels like a brand-new tool.

Four products, one package, ease of use, and power

Lectora has a fervent user base, not surprising considering how long it’s been in the market, but another reason for its success is that it truly balances ease of use in its user interface while allowing a lot of power under the hood for those who wish it.

While I played with Lectora several years ago, I had not used it much on client work. Back then I thought it a bit limited. However, recently, at The eLearning Guild’s Learning Solutions Conference, I led one of the three Learning Stages and saw Daryl Fleary give a demo of Lectora Inspire. My right eyebrow shot up in an involuntary imitation of Star Trek’s Spock. This was a different Lectora from what I remembered, one I would certainly not mind trying.

When you start Lectora, you have a clean interface that gives you several options (Figure 1). As you can see, you can launch Camtasia, Flypaper, or Snagit immediately, and you can access a number of learning resources. You can also choose to start Lectora with a blank file, use a wizard, or use a template you’ve already created. In addition, you can start with a PowerPoint file or access templates that are available online. 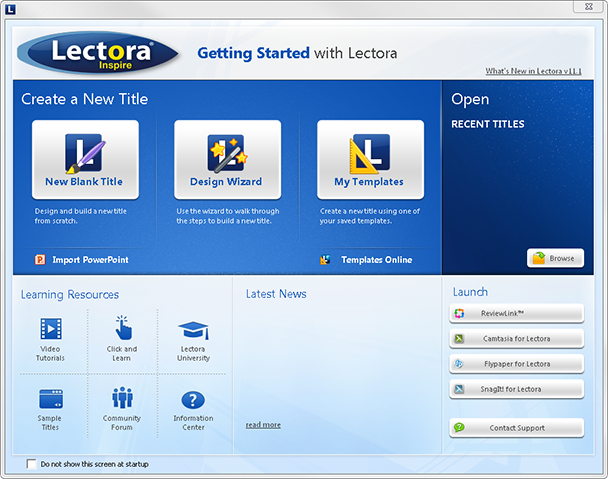 I will focus my comments on the authoring tool itself, not on Camtasia, Flypaper, or Snagit—except to say these products are well known, have also been around for a while, and are all well regarded by their users.

Once you choose an option, interestingly, if you close a file that you’re working on and then create a new title, Lectora provides a more complete and open menu for opening a file or creating a new file (Figure 2). 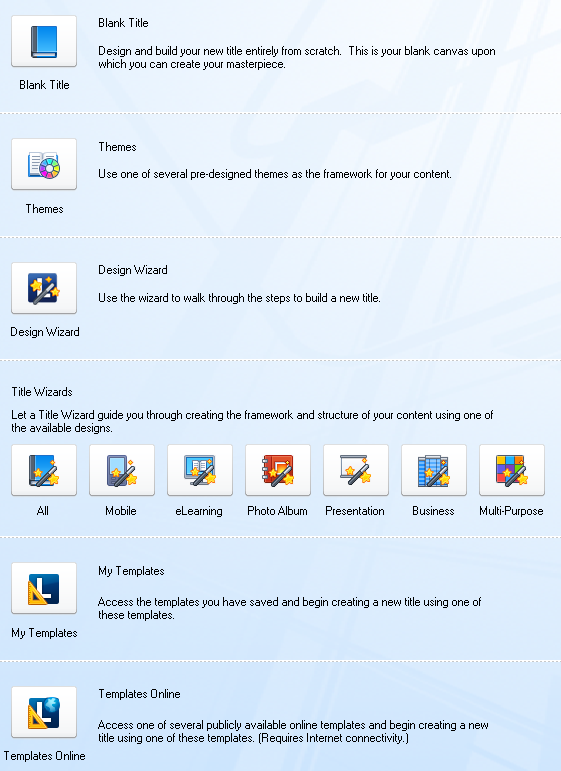 The Design Wizard is the natural choice for those who wish to get a quick start. It’s a good way to get started, but it won’t take you all the way to the very end. There’s a good reason for this. It’s virtually impossible for any wizard to cover all the possible eLearning approaches and designs that a user might need. The Design Wizard covers the basics and makes sure that you get a leg up. The wizard helps you set up the frame size for your title and sets up the organization either as a series of pages or pages divided into chapters (Figure 3). It also establishes other important attributes of your file. 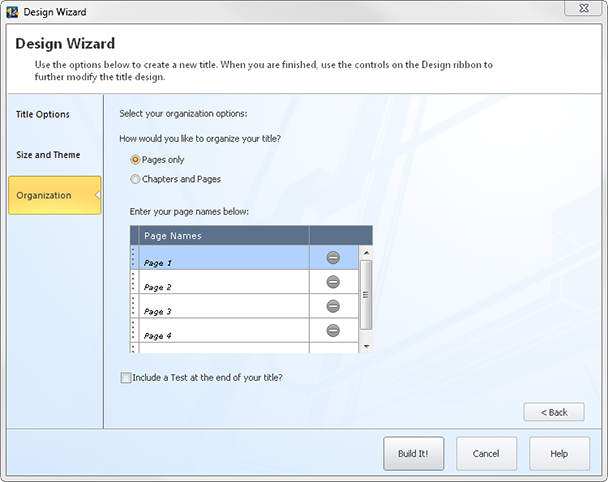 When you click the Build It! button in the Design Wizard, you get a WYSWIG stage and a Title Explorer, where you can alternate between a thumbnail view (similar to PowerPoint) or a breakdown of each element in your title (Figure 4). This helps you stay organized and grounded. 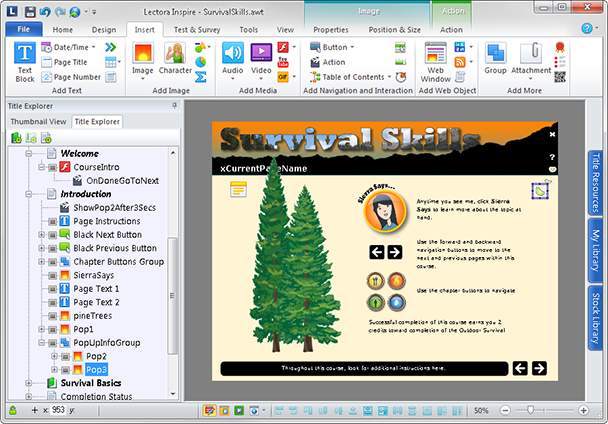 Ribbons full of features and options

The new interface in Lectora borrows from the Microsoft Office approach of using ribbons of tabbed options at the top. This makes it a comfortable environment for most users and allows them to get up to speed quickly.

In a short review, it’s impossible to cover every feature in Lectora, because it’s sure jam packed with them. The best way for me to quickly illustrate the features available in Lectora is to show … well, illustrations! Figure 5 shows the ribbons available in Lectora, and most of the options available on the ribbons are pretty easy to figure out. Notice some of the unique features that you won’t easily find in other authoring tools, such as the ability to insert QR codes (those funny images you can scan with your cell phone and that take you to websites).

Figure 5: All of the Lectora feature ribbons

Even with all of the features you see above, there are still others. For instance, on the right-hand side of the stage, you can expand three options: Live Resources, My Library, and Stock Library (Figure 4). At the bottom of the interface, there are options for switching between Edit Mode, Preview Mode, and more.

I want to make sure I point out one additional feature that warrants attention in Lectora, because I know a lot of you will want to know the question types you can create. Figure 6 shows there are quite a few available.

All in all, there is a LOT here to digest and to like. The different features not only let you create eLearning quickly but also give you extra power and features to create flexible and powerful branching mechanisms.

Lectora costs $2,495 per developer. You can purchase technical support, available 24 hours a day, for an additional $295 when you purchase Inspire. There are no other fees.