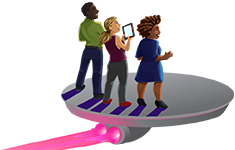 We’re pleased to be welcoming back Glen Keane for a follow-up to the spellbinding keynote he delivered at Learning Solutions Conference & Expo earlier this year. If you missed Glen Keane’s keynote in the spring, you’re in for a real treat. If you did see his earlier keynote, be prepared to be wowed once again!

Creativity is at the heart of both learning and the work of learning professionals. But what happens when technology changes the paradigm? Perhaps no industry has been disrupted by technology more than animation, as the hand-drawing of the past has been almost completely replaced by computers. In this keynote session, you will learn from Glen Keane, a 38-year veteran of Walt Disney Feature Animation. Mr. Keane will share the story of his legendary career. You will learn how technology repeatedly disrupted his work, and how he embraced these changes rather than resisting them. You will discover how he took what he knew of animation and used technological change to enhance his creativity. You will see examples of this creativity and innovation come to life onstage as Mr. Keane shares how his art has evolved from hand-drawn to computer animation, and how it continues to evolve into the growing space of virtual reality and beyond.

Glen Keane, a Disney Legend, is an animator and the founder of Glen Keane Productions. Over his 38 years with Walt Disney Feature Animation, Mr. Keane created and animated such legendary characters as the Little Mermaid, Aladdin, Pocahontas, the Beast, and Tarzan. He also served as supervising animator and executive producer on Tangled. Mr. Keane joined Disney in 1974, where he trained under legendary animators and began his journey animating scenes on The Rescuers. In 2012, he left Disney and launched Glen Keane Productions; the following year, he created Duet, a hand-drawn interactive film, for Google’s Spotlight Stories. Among numerous awards he has received, Mr. Keane was a 2013 Disney Legend Award honoree. He continues to create personal projects that push the boundaries of animation.