Have you ever played a game—a board game, card game, video game, mobile app, or any other kind of game—that was so engaging you didn’t want to stop playing? How about a game that was so boring you couldn’t even finish it? Now, take a moment to think about how these games differed. Chances are they had vastly different scoring mechanics, as scoring is often a major differentiating factor in game effectiveness and player engagement. Proper game scoring mechanics are critical to designing engaging games of all types, and doubly so for designing effective learning games (aka serious games, educational games).

Sharon Boller and Karl Kapp dive deep into how to design learning game scoring mechanics and many other topics in their fantastic book, Play to Learn: Everything You Need to Know About Designing Effective Learning Games. I found their chapter on scoring particularly useful, because scoring is so challenging to get right. However, scoring forms the backbone of any learning. Once you define your learning objective (which is the first step of designing a learning game) and you’ve got a sound scoring model built for your game, the rest (i.e., content, visuals, distribution, etc.) is relatively easy to tack on later. As Boller and Kapp said,

"Designing scoring is harder than meets the eye. Even with a simple game…the scoring may not be as simple from a design perspective as you would think… While you may not program a game yourself and outsource development instead, you still have to have a vision and plan for the scoring that the programmer can implement."

To get a better understanding of how to design the scoring for your game, let’s take a look at six principles of scoring mechanics (that help us design our scoring model and gameplay), four common scoring methods (that let players know how they’re doing), and scoring algorithms (that calculate and track players’ scores and game progress), as described in detail in Play to Learn.

1. Keep the scoring simple: Complex scoring could require players to consult the rules frequently or, worse yet, confuse and discourage them. If players don’t understand the game or quit playing, then they’re not learning.

2. Make the scoring transparent: If the rules aren’t explained clearly in an opening tutorial, rule book, or explanation screen, players will quickly get confused or frustrated, and quit playing.

3. Tie the scoring to learning outcomes: The point of a learning game is learning, not entertainment. If skilled gameplay allows players to win without learning, then the scoring mechanisms aren’t well-designed. Similarly, winning shouldn’t depend too much on chance. Players should win, progress, or otherwise succeed in the game only if they’re learning.

4. De-emphasize winning: Losing can demotivate players. If you design a competitive game (i.e., one with winning and losing), you run the risk of demotivating anyone who loses. You can avoid this problem by emphasizing learning instead of winning. Better yet, design a game that’s cooperative instead of competitive. Cooperative games don’t have winners and losers, since players work together to progress toward a common desired outcome.

5. Add variability: Games where everyone often gets the same score—say, if they get all the questions right—can be boring. Instead, give more points for answering more difficult questions, completing levels more quickly, or making fewer attempts before submitting correct answers. That way, multiple players can learn, but they won’t all receive the same score.

6. Reinforce on-the-job realities through scoring: Assuming your game is designed for employee job training, scoring should reflect and reinforce the type of work they’ll actually be doing. For example, if you’re training for a job that requires a lot of numerical analysis (or time sensitivity, attention to detail, listening to customers, etc.), then your game should require numerical analysis in order to win.

The six principles above are a good start, but you’ll also need game scoring methods. Games allow players to score in four primary ways, and a well-designed and engaging game will use all four methods.

In a spreadsheet, you’ll need to create a scoring table that defines all the rules and elements described in your scoring algorithms. The scoring table for our simple example above might look something like Figure 1 and Figure 2. 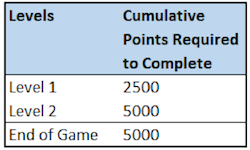 This column provides an overview of learning game scoring mechanics. However, Play to Learn has much more to say on this topic, so if you really want to dig deep, it’s well worth the read. Below, you’ll find additional relevant articles and books on learning game design, video game design, and virtual reality (VR) serious game design. If you’re currently working on building a new serious game or improving the one you have, I encourage you to analyze your game scoring mechanics. This may mean the difference between creating an engaging game that people don’t want to stop playing, and a game so boring people can’t even finish it.

Sparks, Matt. “Metafocus: How Realistic Should Your Serious Game Be?” Learning Solutions. 31 January 2019.